A man for our times 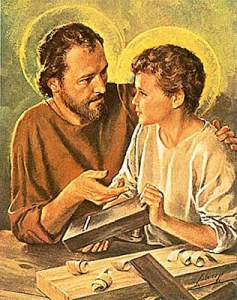 The iconic New Zealand hero is the strong and silent type. He says little, though what he says is honest, wise, and to the point. He is reliable, sensible, and loyal. In a crisis, he makes rapid and sensible judgements, and follows them up with decisive, effective action.

St Joseph, then, should be a New Zealand favourite. None of his words have been recorded – but his actions speak to us across 2000 years.

I’ve been thinking about St Joseph as I prepare for Advent. To him, more than any other human (except for Mary), we owe Jesus. His co-operation with the incarnation and the redemption was unique. He protected the mother and Child, provided for their material needs, guided the Child as He grew to adulthood, taught Him the fundamentals of the Jewish faith, and trained Him in the profession He practiced until He began His public ministry.

Just think about Joseph’s decisive obedience. Having noticed that his betrothed is pregnant, and knowing that he is not the father, he is mulling over the best thing to do. In a dream, he sees an angel who tells him “do not be afraid to take Mary as your  wife, for the child conceived in her is from the Holy Spirit. She will  bear a son, and you are to name him Jesus, for he will save his people  from their sins.” Joseph wakes, we are told, and takes Mary into his home as his wife. No discussion, no questions, just decisive, effective action.

Why dreams? The angels came directly to many others, while they were awake. St John Chrystomen points out that St Joseph’s faith is so great that he doesn’t require a physical manifestation to believe. He knows instantly the difference between an ordinary dream and a dream from God. He listens, and he acts.

He accepted as truth coming from God, the very thing she [Mary] had accepted at the annunciation. The Council teaches: “the obedience of faith must be given to God as He reveals Himself. By this faith, man freely commits himself entirely to God, making ‘the full submission of his intellect and will to God Who reveals,’ and willingly assenting to the revelation given by Him.” This statement, which touches the essence of faith, is perfectly applicable to Joseph of Nazareth.

Legally, Saint Joseph was the father of Jesus – we call him foster father, and we are right to do so, because Joseph was not Jesus’ father in the flesh. But today we’ve lost sight of the reality that a Jewish betrothal in those days was a marriage. The promises had been made. All that remained was to wait out the 12 months until the couple had finished their preparations and could move in together. Jesus was not conceived by a single mother. He was conceived by a bride, and born into a marriage.

the good of this marriage was the Child. . . . Neither a child born in adultery, nor an adoptive son reared in a marriage is its good, since marriage is not directed to rear such; but the marriage [of Joseph and Mary] was specially ordained for this purpose, that the Child should be received and brought up within it(IV Sent. d. 30, q.2, art. 3).

St Joseph was a man who:

turned his human vocation to domestic love into a superhuman oblation of self, an oblation of his heart and all his abilities into love placed at the service of the Messiah growing up in his house. (Redemptoris Custos, 8).

As Pope Paul VI once said:

Saint Joseph is the model of those humble ones that Christianity raises up to great destinies; . . .he is the proof that in order to be a good and genuine follower of Christ, there is no need of great things—it is enough to have the common, simple, and human virtues, but they need to be true and authentic (Discourse, March 19, 1969).

St Joseph, Patron of the Universal Church, as we prepare in this Advent season to once more celebrate the birth of your beloved foster son and Lord, pray for us, that we might protect, defend, teach, and rejoice in the Word and the Light.

JoyfulPapist is an adult convert to Catholicism, with a passion for her God, her faith, and her church.
View all posts by joyfulpapist →
This entry was posted in Church History, Living Catholic lives and tagged Advent, Joseph of Nazareth, Patron of the Universal Church, St Joseph. Bookmark the permalink.

2 Responses to A man for our times