The Immaculate Conception of Mary

Today, 8 December, the Church celebrates the Solemnity of the Immaculate Conception of the Virgin Mary.

The Catholic proclamation of 1854 stated that Mary “was, from the first moment of her conception, by a singular grace and privilege of almighty God and by virtue of the merits of Jesus Christ, saviour of the human race, preserved immune from all stain of original sin” (Pius IX, Ineffabilis Deus). Our Lady is thus declared free of original sin through grace and divine privilege. Although the encyclical was written only in the nineteenth century, the teaching itself belongs to the Tradition of the Church dating back to earliest times.

Devotion to Mary was a part of the shared heritage of Christian faith until well after the Reformation and most of the Protestant reformers would readily have assented to this teaching. Martin Luther was explicitly clear about this as, for example, in the following extract from a sermon he gave in 1527:

“The infusion of Mary’s soul was effected without original sin; so that in the very infusion of her soul she was also purified from original sin and adorned with God’s gifts, receiving a pure soul infused by God; thus from the first moment she began to live she was free from all sin.” 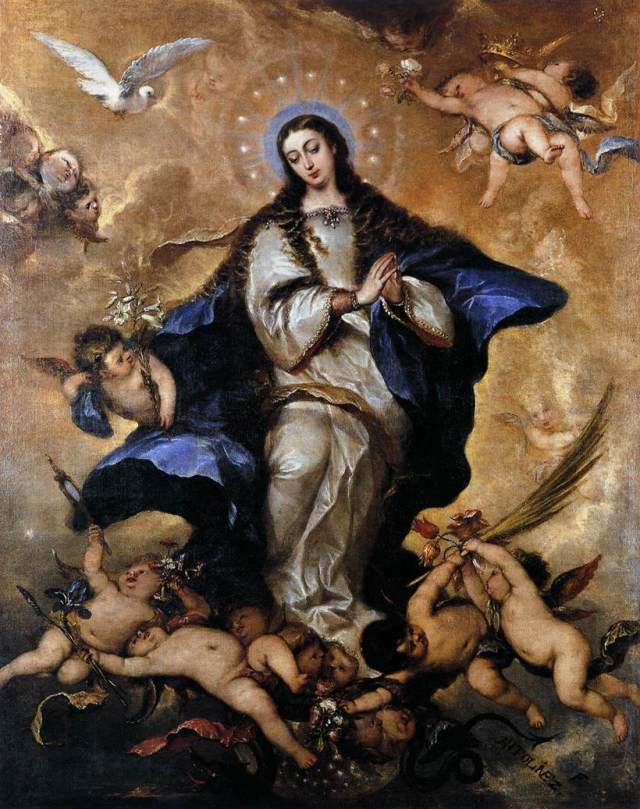 Here are three further insights, from men whose very lives reflected true devotion to the Blessed Virgin Mary, into the mystery of the Immaculate Conception:

God the Son has communicated to his mother all that he has gained by his life and his death, his infinite merits and his admirable virtues, and he has made her the disburser of all that his Father has given him as his inheritance. It is through her that he applies his merits to his members, communicates to them his virtues and distributes to them his graces: she is his mysterious channel, his splendid aqueduct by which he pours forth his mercies, sweetly and abundantly upon us.

The Holy Spirit has communicated his unsurpassable gifts to Mary his faithful Spouse, and he has chosen her to be the dispenser of all that he possesses so that she distributes to whom she wishes, as she wishes and when she wishes, all his gifts and graces, he himself making no gift to men except by her virginal hands. This is in accordance with the will of God who has designed that we should have all things in Mary…”

“Who can estimate the holiness and perfection of her, who was chosen to be the Mother of Christ? If to him that hath, more is given, and holiness and divine favour go together (and this we are expressly told), what must have been the transcendent purity of her, whom the Creator Spirit condescended to overshadow with His miraculous presence? What must have been her gifts, who was chosen to be the only near earthly relative of the Son of God, the only one whom He was bound by nature to revere and look up to; the one appointed to train and educate Him, to instruct Him day by day, as He grew in wisdom and stature? This contemplation runs to a higher subject, did we dare to follow it; for what, think you, was the sanctified state of that human nature, of which God formed His sinless Son; knowing, as we do, that “that which is born of the flesh is flesh” and that “none can bring a clean thing out of an unclean”?

“Nothing is so calculated to impress on our minds that Christ is really partaker of our nature, and in all respects man, save sin only, as to associate Him with the thought of her, by whose ministration He became our Brother.”

“Love is union, and Mary is joined in an ineffable manner to the Holy Spirit because she is his spouse… The Holy Spirit lives in the soul of the Immaculate, in her very being, and makes her fruitful from the first instance of her existence and throughout her life, that is, forever. This uncreated Immaculate Conception conceives divine life immaculately in the soul of Mary, his Immaculate Conception. The virginal womb of her body, too, is reserved for him who conceives there in time – everything material comes about according to time – the divine life of the God-man.”

We, too, are “called to be mothers of God, bearing Jesus Christ in human souls.” To this end, Kolbe invites us to consecrate ourselves to Mary, “to be changed into her, that she alone remains, so that we may be as much hers as she is God’s. She belongs to God, having become his Mother. And we want to become the mother who would give the life of the Immaculate to every heart that exists and to those that will still come into existence.”

“Thus, entering these hearts and taking full possession of them, she may give birth to sweet Jesus, who is God, that he might grow in them in age and perfection.”

Immaculate Mother of God,
Queen of heaven,
Mother of mercy,
Advocate and Refuge of sinners,
behold, I,
enlightened and inspired
by the graces obtained for me
abundantly from the divine treasury
through thy maternal affection,
resolve this day and always
to place my heart into thy hands
to be consecrated to Jesus.

To thee, therefore, most Blessed Virgin,
in the presence of nine choirs of Angels
and all the Saints, I now give it.
Do thou, in my name, consecrate it to Jesus;
and out of the filial confidence
which I hereby make profession of,
I am certain that now and always
thou wilt do all thou canst to bring it
to pass that my heart may ever wholly belong to Jesus,
and may imitate perfectly the example of the Saints,
and in particular that of Saint Joseph,
thy most pure Spouse. Amen.
St Vincent Pallotti (1798-1850)

8 Responses to The Immaculate Conception of Mary