Cause for the Beatification of Archbishop Fulton Sheen

Fulton John Sheen was born to Newton and Delia on May 8,1895 in El Paso, Illinois. The oldest of four sons, he was baptized Peter John in St. Mary’s Church, but soon became known by his mother’s maiden name, Fulton. The family moved to Peoria where the young Sheen attended school and served as an altar boy at St. Mary’s Cathedral. Turning down a significant scholarship for graduate school, he followed his desire to become a priest and entered St. Paul’s Seminary in Minnesota.

He was ordained a priest on September 20, 1919 in the Peoria Cathedral. Father Sheen went on to become Archbishop Fulton John Sheen, a universally popular evangelist, radio/TV personality, writer and missionary. He is most known for his television series, “Life is Worth Living” which had a viewing audience of over 30 million people.

On October 3, 1979 Archbishop Sheen had an audience with Pope John Paul II at which the Pope embraced Sheen and gave a perfect summary of his life and work: “You have written and spoken well of the Lord Jesus. You have been a loyal son of the Church!” Archbishop Fulton John Sheen, a Son of Peoria, a Son of the Church, died on December 9, 1979 in his private chapel in his Manhattan apartment. In 2002, Bishop Daniel Jenky, CSC, of the Diocese of Peoria, IL officially opened the cause for Sheen’s beatification and canonization. 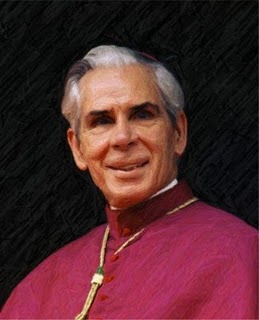 Archbishop Sheen cause again being advanced in diocese

After a 12-week “pause,” the Peoria-based Archbishop Fulton John Sheen Foundation is resuming its efforts to advance the cause for beatification and sainthood of the world-renowned media pioneer, author, and native of the Diocese of Peoria.

Bishop Daniel R. Jenky, CSC, who serves as president of the Sheen Foundation, “happily announces” the resumption of the local efforts in a Foundation statement dated Jan. 27.

On Nov. 3, Bishop Jenky suspended work on the cause in the Diocese of Peoria because of questions with the Archdiocese of New York over the future location of Archbishop Sheen’s remains. While that question remains “unsettled” — the body is now in a crypt beneath St. Patrick’s Cathedral in New York, while Bishop Jenky has petitioned for its transfer to St. Mary’s Cathedral in Peoria –- the matter is now being reviewed by the Congregation for Saints’ Causes at the Vatican.

Bishop Jenky received encouragement from around the world and “especially within his own diocese” to continue the Foundation’s work, according to Patricia Gibson, chancellor of the Diocese of Peoria and an officer of the Sheen Foundation.

Archbishop Sheen, born in El Paso, Ill., and ordained a priest of the Diocese of Peoria, went on to become an internationally popular evangelist, radio/TV personality, writer and missionary. He is most known for his television series, “Life is Worth Living,” which had a viewing audience of more than 30 million people.

Archbishop Sheen died on Dec. 9, 1979. The Diocese of Peoria opened the diocesan phase of his canonization cause in 2002. It was completed in 2008, and the research and testimonies are now being evaluated at the Vatican by the Congregation for Saints’ Causes.

Following is the full text of the Sheen Foundation’s statement:

The Sheen Foundation has been the promoter of the cause since it was officially opened in 2002 and centralized its operations in Peoria, Ill., in 2007. As Bishop of Peoria, Bishop Jenky presided over the diocesan investigation into the life and sanctity of Fulton Sheen, who was born, raised, and ordained a priest in the Diocese of Peoria. Over the years, the Sheen Foundation and its work to advance the cause for Archbishop Sheen’s beatification has become a worldwide movement, attracting the support of cardinals, bishops, clergy, religious, missionaries and lay faithful from around the globe.

As part of his efforts to insure the proper oversight of the Sheen Foundation, Bishop Jenky asked the Foundation leadership to undergo a thorough renewal in the spring of 2008, shortly after the conclusion of the diocesan phase of the process and the sending of the documents to the Congregation for the Causes of the Saints at the Vatican. In his desire to offer oversight and encouragement to the cause, Bishop Jenky became the president (the juridic representative in canon law) of the Archbishop Fulton John Sheen Foundation, with consultation provided by a Board of Directors and an Advisory Council made up of clergy, religious, and lay family and friends of Archbishop Sheen.

In January 2010, Bishop Jenky, as president of the Foundation, pursued the Foundation’s goal of transferring the remains of Archbishop Sheen from its relatively obscure crypt under the sanctuary of St. Patrick’s Cathedral, New York, to a new tomb being prepared in the Peoria Cathedral. The Foundation leadership has been in favor of this transfer since at least 2002. Bishop Jenky, in his role as the Bishop of Competence during the diocesan investigation, made several requests to the Archbishop of New York and was personally assured that the tomb would be transferred at the appropriate time.

Bishop Jenky formally requested this transfer from Archbishop Timothy Dolan throughout 2010. After many months of requests for clarification, Archbishop Dolan would give no assurances regarding the transfer of Archbishop Sheen’s remains. Bishop Jenky called for a pause in the work of the Foundation in November 2010. The failure of the Archdiocese of New York to fulfill the promised transfer of the remains to Peoria caused great upset and even scandal among those who had so long supported the cause. The people and clergy of the Diocese of Peoria were particularly distressed as they had so generously supported the work of the Foundation for so long.

Patricia Gibson, Chancellor of the Diocese of Peoria and officer of the Sheen Foundation, commented: “Bishop Jenky felt compelled to initiate the pause in light of the months of unresolved questions regarding the transfer of the remains. Even though this issue remains unsettled, Bishop Jenky received encouragement from cardinals, bishops and the faithful from around the world, and especially from within his own diocese. Bishop Jenky has asked the Vatican dicastery to help resolve the question of the tomb, even as he has now definitively continued the Foundation’s work to advance Archbishop Sheen’s cause,” said Gibson.

After further consultation, and having heard the desire of the faithful to see the cause advance, Bishop Jenky, as president of the Sheen Foundation, is happy to work with the postulator in Rome and is hopeful that the cause will advance quickly.

Msgr. Stanley Deptula, executive director of the Sheen Foundation, added “I am so happy to see the Foundation’s leadership continue in Peoria. Sheen was born in Peoria. His cause for sainthood was begun in Peoria. And I look forward to seeing this good work completed in Peoria.”

The above article is from The Catholic Post, the Diocesan newspaper of Peoria, Illinois, U.S.A..

I have been made aware of a letter from the Arch Diocese of New York regarding Archbishop Fulton Sheen’s remains, the relevant extract is reproduced below:

“Perhaps the Foundation could be made aware of correspondence from Archbishop Dolan to Bishop Jenky of October 23, 2010, which would clarify this regrettable and inaccurate charge by the Foundation.  In the aforementioned letter, the archbishop assured the bishop that he was more than happy to continue his research into the question of the transfer of the remains, but that his study on the matter had already revealed that there was in fact no evidence of such a verbal promise; that Archbishop Sheen’s Last Will and Testament expressed a desire for burial in New York; that Archbishop Sheen had gratefully accepted Cardinal Terence Cooke’s invitation for internment in the crypt beneath the main altar of Saint Patrick’s Cathedral traditionally reserved for its archbishops; that the Congregation for Saints had, in 2005, explicitly instructed Cardinal Edward Egan, then-Archbishop of New York, not to transfer the remains; and that Archbishop Sheen’s family was strong in its preference that his remains stay in place at Saint Patrick’s Cathedral”

4 Responses to Cause for the Beatification of Archbishop Fulton Sheen