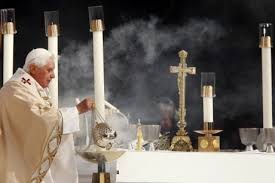 Throughout its history, the Church has established sensible signs that would help the faithful to elevate their souls to God.

The Council of Trent, referring in particular to the Holy Mass, motivated this habit by recalling that “human nature is such that it cannot be easily elevated to the meditation of divine things without external aids: on account of this the Church, as a loving Mother, has established certain rites…to render more evident the majesty of such a great sacrifice and to introduce the minds of the faithful, with these visible signs of religion and piety, to the contemplation of the sublime realities hidden in this sacrifice” (DS, 1746).

One of the oldest signs consists in turning to the east to pray. The east is symbol of Christ, the sun of justice. “Erik Peterson demonstrated the close connection between prayer toward the East and the cross, evident connection at the latest for the post Constantinian period. […] Diffused among Christians was the use of indicating the direction of prayer with a cross on the eastern wall in the apse of basilicas, but also in private rooms, for example, of monks and hermits” (U.M. Lang, “Rivolti al Signore,” Siena, 2006, p. 32).

Another is to look up: “If we are asked toward what do the priest and faithful look during prayer, the answer must be: on high, toward the apsidal vault! In fact, during prayer the praying community did not look in front of it to the altar or the chair, rather it raised its hands and eyes on high. Thus the apsidal vault points to the most important element of the decoration of the church, at the most profound and holy moment of the liturgical action, which is prayer” (S. Heid,”Gebetshaltung und Ostung in fruhchristlicher Zeit,” in Rivista di Archeologia Cristiana, 82 [2006], p. 369).

Hence, when Christ is represented in the apse between the Apostles and martyrs, it is not just a representation, but rather his epiphany before the praying community. The community then “raised the hands and eyes on high to ‘heaven,’ looking at Christ in the apsidal mosaic and talked with him, prayed to him. Evidently, Christ was thus directly present in the image. Given that the apsidal vault was the point of convergence of the prayerful gaze, art furnished all that the man of prayer needed: Heaven, from which the Son of God appeared to the community as from a platform” (ibid., p. 370).

Hence, for these Christians, “to pray and to look formed a whole. The man of prayer wanted not only to pray, but also hoped to see. If a celestial cross of Christ in his heavenly glory was shown in the apse in a marvelous way, then by that very fact the man of prayer who looked on high could see this exactly: that heaven opened for him and Christ showed himself to him” (ibid., p. 374).

Praying to God
Deduced from preceding historical scenes is that the liturgy was not imagined primarily as a dialogue between the priest and the assembly. We cannot enter into details here: we limit ourselves to saying that the celebration of the Holy Mass “toward the people” is a concept that entered to form part of the Christian mentality only in the modern age, as serious studies demonstrate and Benedict XVI confirmed: “[t]he idea that the priest and the people in prayer must look at one another reciprocally was born only in the modern age and is completely foreign to ancient Christianity. In fact, the priest and the people do not address their prayer to one another, but together they address it to the one Lord” (“Teologia della Liturgia,” Vatican City, 2010, pp. 7-8).

Despite the fact that Vatican II never touched this aspect, in 1964 the instruction “Inter Oecumenici,” issued by the Council in charge of enacting the liturgical reformed desired by the Council in No. 91 prescribes: “It is good that the main altar be detached from the wall to be able to turn around easily and celebrate ‘versus populum.'” From that moment, the position of the priest “toward the people,” although not obligatory, became the most common way of celebrating Mass. Things being as they are, the Holy Father proposes, also in these cases, that the old meaning of “oriented” prayer not be lost and suggests that difficulties be averted by placing at the center of the altar the sign of Christ crucified (cf. “Teologia della Liturgia,” p. 88).

Espousing this proposal, added in my turn is the suggestion that the dimensions of the sign must be such as to make it very visible, under pain of lacking effectiveness (cf. M. Gagliardi, “Introduzione al Mistero Eucharistico,” Rome, 2007, p. 371). The visibility of the cross on the altar is implied by the General Instruction of the Roman Missal: “There is also to be a cross, with the figure of Christ crucified upon it, either on the altar or near it, where it is clearly visible to the assembled congregation. It is appropriate that such a cross, which calls to mind for the faithful the saving Passion of the Lord, remain near the altar even outside of liturgical celebrations” (No. 308).

It is not specified, however, if the cross must be necessarily at the center. Intervening here, therefore, are motivations of a theological and pastoral order, which in the restricted space at our disposition we cannot expose.

We limit ourselves to conclude quoting Benedict XVI: “It is not necessary in prayer, and more than that, it is not even appropriate to look at one another reciprocally; much less so when receiving Communion. […] In an exaggerated and misunderstood implementation of ‘celebration toward the people,’ in fact, the crosses at the center of the altars were removed as a general norm  — even in the basilica of St. Peter in Rome — so as to not obstruct the view between the celebrant and the people. However, the cross on the altar is not an impediment to sight, but rather a common point of reference.

“It is an ‘iconostasi’ that remains open, which does not impede being mutually in communion, but is a mediator and still signifies for everyone the image that concentrates and unifies our sight. I dare to propose the thesis that the cross on the altar is not an obstacle, but the preliminary condition for the celebration ‘versus populum.’ Also made clear with this would be the distinction between the liturgy of the Word and the Eucharistic prayer. Whereas the first is about proclamation and hence of an immediate reciprocal relationship, the second has to do with community adoration in which all of us continue to be under the invitation: ‘Conversi ad Dominum’ — let us turn toward the Lord; let us convert to the Lord!” (“Teologia della Liturgia,” p. 536).
* * *
Father Mauro Gagliardi is a consultor of the Office for the Liturgical Celebrations of the Supreme Pontiff and of the Congregation for Divine Worship and the Sacraments, and a professor of theology at the Pontifical Athenaeum Regina Apostolorum of Rome.