TELEGRAM FROM THE POPE FOR VICTIMS OF EARTHQUAKE IN JAPAN

VATICAN CITY, 12 MAR 2011 (VIS) – The Holy Father, through Cardinal Secretary of State Tarcisio Bertone S.D.B., has sent a telegram of condolence to Archbishop Leo Jun Ikenaga S.J. of Osaka, Japan, president of the Catholic Bishops’ Conference of Japan, for the earthquake and tsunami which have brought devastation to the country.

“Deeply saddened by the sudden and tragic effects of the major earthquake and consequent tsunamis which have struck Japan’s north-eastern coastal regions, His Holiness Pope Benedict XVI assures all who have been afflicted of his closeness at this difficult time. He prays for those who have died, and upon their grieving families and friends he invokes divine blessings of
strength and consolation. The Holy Father also expresses his prayerful solidarity with all those providing rescue, relief and support to the victims of this disaster”. 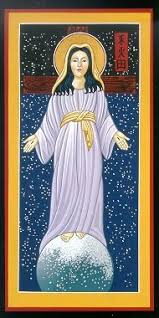 Our Lady of Akita

VATICAN CITY, 13 MAR 2011 (VIS) – After praying the Angelus today, the Pope spoke of the “images of the tragic earthquake and the consequent tsunami in Japan” which, he said, “have left a deep impression on us all.

“I wish to renew”, he added, “my spiritual closeness to the dear people of that country who are facing up to the consequences of these calamities with dignity and courage. I pray for the victims and their families, and for everyone suffering as a result of these tremendous events. And I encourage everyone who, with commendable willingness, is bringing aid. Let us remain united in prayer, the Lord is near us!