Courtyard of the Gentiles “to promote dialogue with non-believers”.

In the Holy See Press Office at midday Friday, the presentation took place of the “Courtyard of the Gentiles”, an initiative by the Pontifical Council for Culture which will involve two days of meeting and dialogue between believers and non-believers in Paris, France, on 24 and 25 March.

Participating in today’s press conference were Cardinal Gianfranco Ravasi, president of the Pontifical Council for Culture, Fr. Jean-Marie Laurent Mazas F.S.J., executive director of the “Courtyard of the Gentiles”, and Stanislas de Laboulaye, French ambassador to the Holy See.
Cardinal Ravasi explained that “at the request of Benedict XVI the Church has decided to embark on a new stage of dialogue, exchange and joint activity among believers and non-believers. This has been entrusted to the Pontifical Council for Culture”. 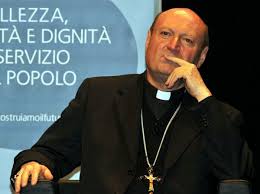 The name “Courtyard of the Gentiles” evokes “the image of the vast area near the Temple of Jerusalem reserved for debates between Jews and non-Jews”, the cardinal said. “It complements inter-religious dialogue which has been going on for some decades and represents a long-term commitment of the Church which will interest many people in the world, believers and non-believers alike”.

“The aim”, Cardinal Ravasi continued, “is to help to ensure that the great questions about human existence, especially the spiritual questions, are borne in mind and discussed in our societies, using our common reason”.

The president of the pontifical council went on: “That symbol of apartheid and sacral separation which was the wall of the ‘Courtyard of the Gentiles’ was cancelled by Christ. He wished to eliminate barriers so as to ensure a harmonious meeting between the two peoples. … Believers and non-believers stand on different ground, but they must not close themselves in a sacral or secular isolationism, ignoring one another or, worse still, launching taunts or accusations as do fundamentalists on one side and the other. Of course, differences must not be skimmed over, contradictory ideas must not be dismissed, or discordances ignored, … but thoughts and words, deeds and decisions can be confronted, and even come together”, he said.

Relations between Christians and Gentiles “can follow the paradigm of a duel”, the cardinal concluded, “but what the ‘Courtyard of the Gentiles’ wishes to propose is, by contrast, a duet. A duet in which the sound of the voices may be at antipodes – such as a bass and a soprano – yet manage to create a harmony without renouncing their own identity; in other words, … without fading away into a vague ideological syncretism”.

The inaugural session of the “Courtyard of the Gentiles” will take place on the afternoon of 24 March at the Paris headquarters of UNESCO, presided by Irina Bokova, director general of UNESCO, and attended by diplomats and representatives of the world of culture.
A number of initiatives are scheduled to be held on Friday 25 March: in the morning at the Sorbonne University and in the afternoon at the “Institut de France” and the “College des Bernardins”. The day will conclude with a celebration on the forecourt of the cathedral of Notre Dame with the theme: “Into the Courtyard of the Unknown”. The event is open to everyone, especially young people. The Pope will address those present from giant screens set up for the occasion, explaining the significance and objectives of the Pontifical Council for Culture’s initiative.

This entry was posted in Interreligious relationship, Mission and tagged Cardinal Ravasi, Gentiles. Bookmark the permalink.

1 Response to Courtyard of the Gentiles “to promote dialogue with non-believers”.