A saint does not have to die young in order to be a role model for children and adolescents of course, and many of the most popular saints lived well into adulthood. Yet there is something appealing in a child saint, having the wisdom and intrepidity (because this is indeed what it takes) to discover God’s love early in life, and “leaving all to follow Him”.

Youth is no barrier to holiness, and mere children can become saints. The call to holiness begins at Baptism; we do not have to wait for old age and grey hair to serve God. Youthful saints tell us something about sanctity, and their example is especially luminous as they dedicate their young lives to God.  Youngsters need flesh and blood heroes to admire, whose courage, determination and great love of God and his Church, have been their incentive to overcome temptation and difficulties. The example of the saints counters that of the straw idols that are all too often the only ones they are offered nowadays.

Parents need to tell their children stories of the saints and bedtime is usually the best moment.  (It isn’t always easy when we have the TV, video games, play stations etc., as rivals!) As well as exciting adventure stories, fairy tales, and well-known children’s novels all children love, the true life stories of the great saints and martyrs of the Church awaken their interest and fascination.

There are so many to choose from in the calendar of saints. I have chosen just three examples: 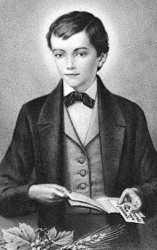 One of my favourites when I was a child was St. Dominic Savio (1842 – 1857) who died one month before his fifteenth birthday. Dominic was born into a poor, devoutly Catholic family. When he made his first Holy Communion, at the age of seven, he wrote down the following as his plan of life: “I will go to Confession very often and go to Communion as often as my confessor gives me permission. I will celebrate Sundays and feast days as holy days. Jesus and Mary will be my friends. Death rather than sin.” Dominic kept faithfully to this plan, strengthened by the sacraments and his devotion to Mary, and accepted hardships gladly. God blessed him with special gifts.

When he was 12, he visited Don Bosco and entered the Oratory school in Turin. There, he started the tread of holiness, no doubt greatly assisted under the wise guidance of St. John Bosco. He prayed and studied with great seriousness and he was constant in fulfilling his duties well. His kindness and cheerfulness made him a friend of all his companions helping them in every way, teaching the younger ones their Catechism, tending the sick, sorting out quarrels, etc.. To help everyone save his soul, he started the Sodality of the Immaculate Conception. St. John Bosco would afterwards refer to this period of Dominic and his companions at the Oratory as the “golden years.”

At Dominic Savio’s canonization Pope Pius XII described him as “small in size, but a towering giant in spirit.” 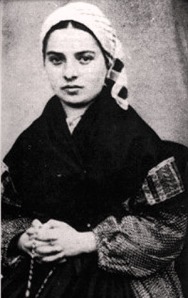 What Catholic child does not feel compassion and fascination for the little asthmatic girl, St. Bernadette (1844 – 1879), who was visited by Our Blessed Lady in the grotto of Lourdes? Her family’s appalling poverty, her suffering and the many obstacles she encountered as she set about to do Our Lady’s bidding, show what a truly valiant spirit she possessed. But Bernadette was a very humble and unpretentious person. She once said, “The Holy Virgin only chose me because I was the most ignorant. If she could have found someone else more ignorant, she would have chosen her.” Once, when she had to stand before the police to explain her revelations, she impressed her interrogators with her naturalness. But before her parents, the parish priest, and her religious superior, she was a model of respect and obedience.

Here you have the spirit of a true Catholic, of a true saint. She never gave importance to the world’s values, she didn’t care about what other people were thinking about her, be it good or bad. If someone gives importance to the applause of the world, he ends by losing his liberty and relying on the applause to go ahead. To be able to enjoy complete serenity, one has to be independent of the opinion of the world. St. Bernadette Soubirous was one who did not care about that. She used to do what her duty was according to Holy Mother Church.

St. Bernadette’s tale, and that of the little shepherds of Fatima, also encourages children to grow in a deeper understanding and love of the holy Rosary.

Then there is the true heroism of St. Tarcisius of the Holy Eucharist, a twelve year old acolyte, who lived during one of the periods of fierce Roman persecutions. In spite of the danger, Tarcisius would carry the Sacred Host from a secret meeting place in the catacombs to imprisoned, condemned Christians in the Roman dungeons.

One day, whilst on one of these missions, Tarcisius was confronted by a crowd of boys who demanded he hand over the bundle he was carrying. Well aware that he was holding the true body of Christ, Tarcisius refused to do so. Enraged, the boys beat and punched him to death.

At his tender age, Tarcisius had true faith in the Real Presence, and gave his life rather than allow the Sacred Host to be sacrileged.

Update: Little Nellie of Holy God and Blessed Jose Luis Sanchez del Rio are two more child saints who should not be forgotten as role models for children for their amazing courage, faith and love of God.

7 Responses to Child Saints as Role Models for Children