The Provost of the London Oratory on the translation of the Missal. 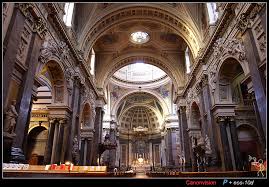 One is often reluctant to write or speak publicly about the sacred liturgy. It is a subject that sometimes produces more heat than light. Many people feel strongly about it, and one has often deemed it better to err on the side of caution. Over the last forty years since major liturgical changes occurred in the late 1960’s, much has been said that might have best been left unsaid. Much has been done that would have been better left undone. However, there are now further liturgical changes coming later this year, in the English-speaking world, which we should be looking forward to, and which I hope we shall all receive with gratitude. A new English translation of the Roman Missal (in the Ordinary Form) has been in gestation for some ten years at least, and the Holy See has now given permission for this newly completed translation to be published and used for Mass in English. Indeed it will be mandatory for Mass in English. The new translation is ‘a given’. In our own diocese the Archbishop of Westminster has initiated a programme of preparation for this significant development. This programme is called “Praying the Mass” and it asks all of us, priests and people, to deepen our understanding of what the Mass is, and to improve the way we celebrate it. We should make good use of the material being published by the Bishops of England and Wales and by Westminster Diocese. This is a useful place to start.

A lot more will be said and written about this as this year goes on. It is expected that the new translation of the Ordinary of the Mass will be in use from September, and we hope that the complete missal will be in use from Advent Sunday. These changes are not alterations to the rite of the Ordinary Form of Mass, but to its language. For many years now many of us have felt (even if out of loyalty we have not often said so) that the English version of the Roman Missal was a clumsy mess.

The original Latin was translated loosely, making use of the principle of ‘dynamic equivalence’ (what the original was deemed overall ‘to mean’ rather than what it actually said) and the result was often banal and flat. The coming new translation is a far more faithful rendering of the original Latin, based on the more precise methodology of ‘formal equivalence’. Hence, et cum spiritu tuo will be rendered and with your spirit (not ‘and also with you’). Credo in unum Deum will be I believe in one God (not ‘we believe in one God). Here are two encouraging examples of what we shall be praying as from September at Mass celebrated in English. First, the Confiteor at the start of Mass (with acknowledgement to the International Committee on English in the Liturgy, © 2010)

I confess to almighty God

and to you, my brothers and sisters,

that I have greatly sinned

in my thoughts and in my words,

And, striking their breast, they say:

through my most grievous fault;

all the Angels and Saints,

and you, my brothers and sisters,

to pray for me to the Lord our God.

Behold the Lamb of God,

behold him who takes away the sins of the world.

Blessed are those called to the supper of the Lamb.

Lord, I am not worthy

that you should enter under my roof,

but only say the word

and my soul shall be healed.

Those who are familiar with the Latin texts will easily recognize that this new translation is a marked improvement. The rest of the Ordinary is more than satisfactory. The Canon is the heart of the Mass, and the new translation of the

Roman Canon is radically faithful to the Latin original. The tone and register of it are particularly illuminating and I am very much looking forward to praying it. It will of course take us all a little time to become accustomed to these new

translations but I am certain that the effort will be well worthwhile. The overall result will be a more worthy and a more uplifting celebration of the sacred mysteries. The full text of the new Ordinary can be found here

Taking the longer view, I also see this new development as a most welcome step on a long road. What is that long road? To put it briefly, our present liturgical situation, two current versions of the one Roman rite, is unusual to say the very least. Perhaps the day might eventually come when there is but one current version of the Roman rite in use throughout the Church; a new editio typica of one single Roman Missal which (I hope and pray) will make use of the evident strengths of both forms of the Roman rite currently in use, and which will also avoid the manifold deficiencies of both current forms. It is interesting to compare the coming ICEL translation with the ‘interim’ English version of the 1962 missal which was initially produced and briefly used between 1965 and 1969.

It is all too easy to be discontent, and some people are never satisfied. We should remember that our worship will never be perfect until by God’s grace we are gathered unto the Church Triumphant in heaven. The liturgy we celebrate on earth will always fall short in some ways. We strive constantly to improve the way we celebrate the Lord’s Eucharist, but our contribution to it will never be perfect. Nevertheless I believe we should all be greatly heartened by the fact of this new translation that is coming. A prodigious amount of time and work have gone into

it. That in itself is a recognition that we have sometimes made mistakes, and that we can and should learn from those mistakes. We should receive and use the new English missal with gratitude and reverence. We should take the opportunity it provides to deepen our love for the Mass.

Deepening our love for the Mass and improving the way we celebrate it are at the heart of the programme of preparation and catechesis – “Praying the Mass” – which Archbishop Nichols has initiated in very clear conformity with the wishes of the Vicar of Christ. When Church historians in the future look back on the many splendid achievements of our present Holy Father Pope Benedict, now gloriously reigning, they must surely see that among his greatest gifts to the Church was the launching of a much-needed and far-reaching liturgical renewal.

To you, therefore, most merciful Father,

we make humble prayer and petition

through Jesus Christ, your Son, our Lord:

that you accept and bless ✠ these gifts, these offerings,

these holy and unblemished sacrifices…

The Bishop’s Conference announced earlier this week that ‘there would be no changes to the liturgy (following the use of the new Missal) for at least 6 years”.
(From: www.bromptonoratory.com)