Reflects on Themes of Temptation and Conscience
ROME, MARCH 21, 2011. (Zenit.Org)

Cardinal Gianfranco Ravasi is highlighting the example of St. Thomas Becket as a man who knew how to fight temptation and be faithful to his conscience. 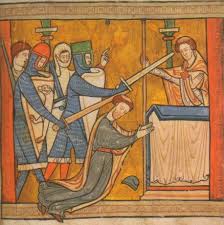 The president of the Pontifical Council for Culture gave an address on March 11 in Rome on the theme of “Temptation,” which drew from the example of the martyred archbishop of Canterbury as portrayed by T. S. Eliot in “Murder in the Cathedral.”

“At present we don’t question ourselves anymore,” the cardinal noted, and “no one makes an examination of conscience; we don’t even realize where evil is.” Referencing the work “Faust” by Johann Wolfgang von Goethe, he stated, “We have lost the great evil one and we have been left with the little villains.” The prelate reflected on the work by Eliot, written in 1935, about the martyrdom of St. Thomas Becket, who was murdered at the altar in 1170.

He noted: “In a climate of schism between the English monarchy and the Church of Rome, after seven years of exile in France, [Becket] returned to England to resolve his conflict with King Henry II. The political situation was extremely dangerous, both for him as well as his faithful.”

Temptors
Cardinal Ravasi affirmed that Becket’s spiritual mission ran into obstacles generated by his interior conflict, materialized in the figures of the four tempters.
He stated, “The first reminds the archbishop of his dissolute youth and the images evoked to which Eliot takes recourse are those of ‘flutes in the fields, violas in the salons, laughter and apple blossoms floating on the water, the whispers in the bedrooms, darkness and wine.”
The prelate said that the second tempter invited him to take off his tunic and don the garments of Grand Chancellor, but Thomas, who knew the attractive force of power, having been inebriated before with its goblet, responds: “Power with the king […] I was king, and his arm and his best reason, but what was glorious exaltation today would undoubtedly be a degrading descent!”

The two first temptations having failed, the third tempter suggested to him, also in vain, to swear against the king and to ally himself with the feudal barons who “represent nationalism, the interests of caste, the subtle game of interests and little betrayals,” explained Cardinal Ravasi.

He added that the seductions of pleasure and power are unimportant in comparison with the glory of martyrdom, and hence the fascination of immortality that the fourth tempter suggests to him: “What is pleasure or royal government, the power of men exercised under a king […] compared with the full control of the power of the spirit? […] Think, Thomas, think of the glory after death. A dead king replaced by a king. But to another king corresponds also another kingdom. The saint and the martyr reign from the tomb.”

The cardinal affirmed that the tenacious Becket also rejected this last temptation that is, in itself, “the greatest betrayal.”

On Christmas day, Cardinal Ravasi noted, during a homily, Becket explained to the people the meaning of Christian martyrdom, which is not a coincidence, or a design of man: “The real martyr is he who has become an instrument of God, and no longer desires anything for himself, not even the glory of martyrdom.”

The prelate affirmed that this is the real temptation: “to do what is convenient for a false motive.”

He recalled that when the four knights sent by the king approach the cathedral, they threaten Becket so that he will revoke the excommunication of the bishops who crowned King Henry, but the archbishop does not change his mind nor does he flee.

Coherence
At stake here are conscience and coherence, stated Cardinal Ravasi, which are eternally in temptation and well expressed by the priests when they cry out: “Close the doors!! Bolt them […] We are safe, we are safe! […] They cannot come in, they don’t have the strength.”
“They wish to say that they are safe in a protected space, where they don’t want the great trial to enter,” explained the cardinal.

However, he added, Thomas ordered that the doors be opened, allowing the hired assassins to enter. The saint stated, “I give my life for the law of God, above the law of man.”
Cardinal Ravasi noted that Becket gives his life not for glory but for coherence with his conscience: It is the moment of the manifestation of great dignity, of faith that does not accept compromises.

The prelate reference another work of Eliot, “Four Quartets,” which won the Nobel Prize for Literature in 1948. He noted that the text, which celebrates the entrance into eternity, reflects the great tension of ideals and politics.

The prelate affirmed that the playwright identifies, with sublime lyricism, the intersecting point between “time” and the “timeless.”

He stated, “It is an occupation of the saint, wrote Eliot, who later corrected himself, clarifying that it is not so much an occupation as something that is ‘given’ and ‘taken.'”

Eternity
The cardinal continued: “And when is this gift of eternity received? When does one come to the moment of intersection? The answer is in life.”

Also, he added, “in a lifetime’s death in love, ardor and selflessness and self-surrender, with self-denial and total abandonment of self.”

In conclusion, Cardinal Ravasi stated, in Eliot’s masterpiece “the parallel is created by the poet between Becket’s life and Christ’s passion, by the temptations of the devil and the sacrifice necessary for the rescue of humanity.”

The cardinal noted, “We don’t live at a time of great tragedies; we live at a time of modest intelligences and very mean behavior in that living, and almost living that is the typical attitude of the trivial person, that floating without descending into the profundity of existence.”

He added, “In his 1925 work ‘The Hollow Men,’ Eliot wrote that this is the way the world ends, not with a bang but a whimper.”

Literally, concluded the cardinal, “Where is the Life that we have lost in this life?”