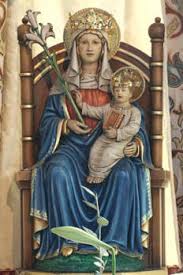 A solemn pontifical Mass celebrated by Archbishop Vincent Nichols of Westminster marked the 950th anniversary of the foundation of the national shrine of Our Lady of Walsingham.
The shrine was established in 1061, the year in which tradition holds that the Virgin Mary appeared to Lady Richeldde Faverches. It became an important pilgrimage site of the Middle Ages, but was destroyed during the Reformation.

It was restored in 1897 and now there is both a Roman Catholic shrine and an Anglican shrine at the site.

Meanwhile, the Ordinariate of Our Lady of Walsingham — the new ordinariate for former Anglicans coming into the Catholic Church under the plan proposed by the Pope in “Anglicanorum Coetibus” — is also marking the celebrations.

In the ordinariate’s newsletter, “The Portal,” Jackie Ottaway and Ronald Crane spoke of the ecumenical heart of Walsingham. They called the ancient shrine a “great leveler, for all prayed in the same Holy Place.”

“At Walsingham today there may be two shrines, but working together they share an ecumenical heart,” the authors said.

Monsignor Keith Newton, the ordinary of the ordinariate, encouraged members to make a pilgrimage to the shrine known as England’s Nazareth during the next six months of the anniversary celebrations.

He announced that he will be leading a pilgrimage there July 17.

“Mass will be celebrated at 12 noon and the intention will be ‘In thanksgiving for the Foundation of the Personal Ordinariate of Our Lady of Walsingham and for the graces of the State Visit of Pope Benedict XV1 to these Isles,'” he announced.

“This is an ideal opportunity,” the monsignor said, “for as many members of the ordinariate as possible to gather in Walsingham and give thanks for all that will have happened to us over the last six months.”