Vatican II and the Crisis of Confusion in American Catholicism 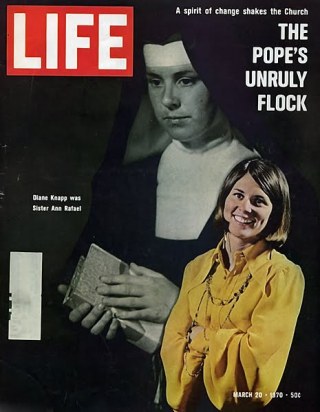 Donald J. Thorman: “It seems to me that if labels are useful, the one I’d have to pin on today’s laity: The Uncertain Catholic. The characteristic note of today’s American Catholic is confusion, indecision; we are treading water, waiting, wondering what is going to happen next. This is the age of the question mark. We no longer feel certain we have all the answers to all of men’s problems. We are no longer certain if we know all the right questions.” (America, Jan. 14, 1967, p.39)

Celledoor Miscellany has reposted these historic articles from back issues of Life magazine, which I highly commend to your attention. They give a vivid insight into the collapse of the ecclesiastical ancien régime following the Second Vatican Council and the internal turmoil facing the Church in the United States. Overall they make for very depressing reading.

I recently happened upon a succinct but comprehensive little booklet, concerning the same theme, entitled Keeping Your Balance in the Modern Church by Fr. Hugh J. O’Connell, C.SS.R., PhD. It was published in 1968 by Liguorian Pamphlets and bears the imprimatur of the Archbishop of St Louis, John J. Carberry. (Interestingly my pamphlet is also signed in pen by the conservative Archbishop John Charles McQuaid of Dublin.) It is a must read for any Catholic who has ever asked himself: ‘How did everything that was so good get so bad?’ While Fr. O’Connell’s pamphlet is largely specific to the American situation, it seems to me that strong parallels existed between all the churches of the English-speaking countries. All these local churches were dominated by Irish immigrants or their descendants in countries which had remained unconquered by Nazi Germany during the Second World War, and where there existed no serious prospect of a communist takeover. None of these characteristics hold true for the countries of the Rhine basin, whose prelates led the push for change in the Church at the Second Vatican Council. Furthermore all the English-speaking local churches were known to have exhibited comparatively less enthusiasm for the pre-conciliar ressourcement and liturgical movements while (or perhaps because) they were still able to boast of high levels of Mass attendance, vocations, popular catechetical knowledge and devotional practice.

Fr. O’Connell contends that the American Catholic Church was caught off guard by the Second Vatican Council:

The Church in North America — laity, priests, nuns and even bishops — was almost completely unprepared for the way things turned out at Vatican Council II. This was the result of a number of factors.

1) Americans had remained relatively untouched by World War II. They experienced little of the ferment and unrest, the need to reassert the value of the individual person, which in Europe flowed from the struggle against Nazism and Fascism.

2) Americans, including theologians and bishops, had little or no acquaintance with the new personalist and existentialist philosophy. This had been developed in Europe, chiefly outside the church. Introduced by certain European theologians, this philosophy exerted a powerful influence on the deliberations of Vatican II and on Catholic life and teaching since the Council.

3) American Catholics were for the most part unaware of the writings of Protestant theologians, both orthodox and liberal. The ecumenical temper of the times brought these ideas to the attention of Catholic theologians, particularly in Germany, France and Holland.

Fr. O’Connell believes that the breakdown of theological censorship has facilitated doctrinal dissent and spread confusion among ordinary lay Catholics:

A good many of the religious problems of the average Catholic laymen, priests and nuns, who make no claim to be specialists or scholars, stem from the new air of freedom of theological thought and discussion resulting from Vatican II.

[…] The great danger, as every reasonable man must recognize, is that freedom brings with it the possibility that it will be abused. In the days before Vatican II, there was actually a very considerable amount of theological speculation and innovation; there were battles quite as heated as those going on today. The only difference was that such ideas were quietly presented in theological journals, and were subjected by experts to analysis and investigation, to weighing of reasons pro and con, to a more or less general acceptance or rejection by qualified theologians before they ever came to public attention.

Moreover, among Catholics the shock of new religious ideas on the minds of those who were not experts was cushioned by the censorship of books and articles and by the index of prohibited books. Before a book treating on religion could be published by a Catholic, it had to be submitted for censorship in order to obtain an imprimatur. If the book was considered to contain opinions contrary to Catholic doctrine, to the decrees of the Holy See, or even too wild and revolutionary, permission to print would be denied. To the liberal, who claimed the right to make up his own mind about religious truth, such censorship was intolerable. To the person who felt no competence to judge between truth and error in complex religious questions, it was a comfort.

Fr. O’Connell is convinced that the actual documents of the Second Vatican Council are capable of an orthodox interpretation, though a tinge of regret for their formulation is easily discernible. He likens the conciliar Fathers’ critical adoption of personalism to St. Augustine’s critical use of Plato or St. Thomas Aquinas’ blending of Aristotelian philosophy with Christian revelation.

Then came Vatican II. We have described how the North European group of bishops, headed by Germany and France, exerted a dominant influence in the Council. Moreover, their theologians wrote the revised versions of the more important schemas which served as basis of discussion in the Council. As a result, these schemas reflected a strong tone of personalism.

Of course, as was mentioned before, these documents were debated by bishops of every caste of mind. Some of the schemas were sent back for correction four or five times. The final version blended both the new personalism and the traditional acceptance of objective truth.