To be “humble of heart”, The 12 degrees of humility according to St. Benedict and St. Thomas Aquinas

Take my yoke upon you and learn from me, for I am meek and humble of heart.
Fr. Cornelius a’ Lapide cites the words of St. Augustine on this verse: “Take my yoke upon you, and learn of Me, not to frame a world, not to create all things, visible and invisible, not to do miracles in the world and to raise the dead; but that I am meek and lowly in heart. Dost thou wish to be great, begin from the least. Thou art thinking of constructing a mighty fabric of loftiness, think first of the foundation of humility. And as great as each one wishes to build up his edifice, the greater the building, so much the more deeply let him dig his foundation.”

In following Christ our Savior, we are to imitate not so much his power and his glory, but rather his meekness and humility. But how to be humble? Indeed, it is much easier to be humble in word than humble of heart. In this regard, we turn to the writings of St. Benedict of Nursia who, in the seventh chapter of his Rule, establishes the twelve degrees of humility. Finally, we will reproduce St. Thomas Aquinas’ defense of the twelve degrees, recalling that the Angelic Doctor himself learned humility through his schooling under the Holy Rule as a boy. [what follows is taken entirely from the Rule of St. Benedict and from the Summa Theologica of St. Thomas Aquinas, respectively] 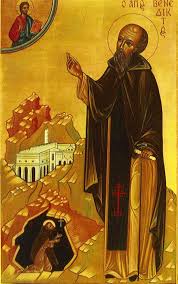 From the Holy Rule of St. Benedict, chapter VII. On Humility
The first degree of humility, then, is that a person keep the fear of God before his eyes and beware of ever forgetting it. Let him be ever mindful of all that God has commanded; let his thoughts constantly recur to the hell-fire which will burn for their sins those who despise God, and to the life everlasting which is prepared for those who fear him. […] Let a man consider that God is always look at him from heaven, that his actions are everywhere visible to the divine eyes and are constantly being reported to God by the Angels.

The second degree of humility is that a person love not his own will nor take pleasure in satisfying his desires, but model his actions on the saying of the Lord, I have come not to do my own will, but the will of him who sent me.

The third degree of humility is that a person for love of God submit himself to his Superior in all obedience, imitating the Lord, of whom the Apostle says, He became obedient even unto death.

The fourth degree of humility is that he hold fast to patience with a silent mind when in this obedience he meets with difficulties and contradictions and even any kind of injustice, enduring all without growing weary or running away.

The fifth degree of humility is that he hid from his Abbot none of the evil thoughts that enter his heart or the sins committed in secret, but that he humbly confess them.

The sixth degree of humility is that a monk be content with the poorest and worst of everything, and that in every occupation assigned him, he consider himself a bad and worthless workman.

The seventh degree of humility is that he consider himself lower and of less account than anyone else, and this not only in verbal protestation but also with the most heartfelt inner conviction.

The eighth degree of humility is that a monk do nothing except what is commended by the common Rule of the monastery and the example of the elders.

The ninth degree of humility is that a monk restrain his tongue and keep silence, not speaking until he is questioned.

The tenth degree of humility is that he be not ready and quick to laugh.

The eleventh degree of humility is that when a monk speaks he do so gently and without laughter, humbly and seriously, in few and sensible words, and the he be not noisy in his speech.
The twelfth degree of humility is that a monk not only have humility in his heart but also by his very appearance make it always manifest to those who see him. That is to say that whether he is at the Work of God, in the oratory, in the monastery, in the garden, on the road, in the fields or anywhere else, and whether sitting, walking or standing, he should always have his head bowed and his eyes toward the ground.

Having climbed all these steps of humility, therefore, the monk will presently come to that perfect love of God which casts out fear. And all those precepts which formerly he had not observed without fear, he will now begin to keep by reason of that love, without any effort, as though naturally and by habit. No longer will his motive be the fear of hell, but rather the love of Christ, good habit and delight in the virtues which the Lord will deign to show forth by the Holy Spirit in his servant now cleansed from vice and sin. 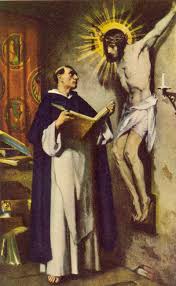 Whether twelve degrees of humility are fittingly distinguished in the Rule of Blessed Benedict? (Summa Theologica II-II, q.61, a.6)
As stated above (Article 2) humility has essentially to do with the appetite, in so far as a man restrains the impetuosity of his soul, from tending inordinately to great things: yet its rule is in the cognitive faculty, in that we should not deem ourselves to be above what we are. Also, the principle and origin of both these things is the reverence we bear to God. Now the inward disposition of humility leads to certain outward signs in words, deeds, and gestures, which manifest that which is hidden within, as happens also with the other virtues. For a man is known by his look, and a wise man, when thou meetest him, by his countenance (Sirach 19:26). Wherefore the aforesaid degrees of humility include something regarding the root of humility, namely the twelfth degree, “that a man fear God and bear all His commandments in mind.”

Again, they include certain things with regard to the appetite, lest one aim inordinately at one’s own excellence. This is done in three ways. First, by not following one’s own will, and this pertains to the eleventh degree; secondly, by regulating it according to one’s superior judgment, and this applies to the tenth degree; thirdly, by not being deterred from this on account of the difficulties and hardships that come in our way, and this belongs to the ninth degree.

Certain things also are included referring to the estimate a man forms in acknowledging his own deficiency, and this in three ways. First by acknowledging and avowing his own shortcomings; this belongs to the eighth degree: secondly, by deeming oneself incapable of great things, and this pertains to the seventh degree: thirdly, that in this respect one should put others before oneself, and this belongs to the sixth degree.

Again, some things are included that refer to outward signs. One of these regards deeds, namely that in one’s work one should not depart from the ordinary way; this applies to the fifth degree. Two others have reference to words, namely that one should not be in a hurry to speak, which pertains to the fourth degree, and that one be not immoderate in speech, which refers to the second. The others have to do with outward gestures, for instance in restraining haughty looks, which regards the first, and in outwardly checking laughter and other signs of senseless mirth, and this belongs to the third degree

24 Responses to To be “humble of heart”, The 12 degrees of humility according to St. Benedict and St. Thomas Aquinas