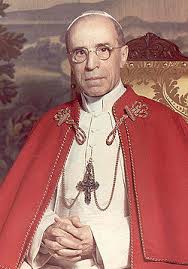 By Jesús Colina
ROME, JULY  2011 (Zenit.org).- The direct action of Pope Pius XII saved the lives of more than 11,000 Jews in Rome during the Second World War, according to documentation recently discovered by historians.

Pave the Way Foundation representative for Germany, historian and investigative researcher Michael Hesemann, discovered a number of very important original documents in his research of the open archives of Santa Maria dell Anima Church, which is the National Church of Germany in Rome.
The U.S.-based foundation, founded by Jew Gary Krupp, announced the findings in a statement sent to ZENIT.

“Many have criticized Pius XII for remaining silent during the arrest and when trains left Rome containing 1,007 Jews who were sent to the death camp Auschwitz,” Krupp stated. “The critics also do not acknowledge Pius XII’s direct intervention to end the arrests of Oct. 16, 1943.”

“New discoveries prove that Pius XII acted directly behind the scenes to end the arrests at 2:00 p.m., on the very day they began, but who was powerless to stop the ill-fated train,” he added.
According to a recent study by researcher Deacon Dominiek Oversteyns, there were 12,428 Jews in Rome on Oct. 16, 1943.
“Pope Pius XII’s direct action saved the lives of over 11,400 Jews,” Krupp explained. “On the morning of Oct. 16, 1943, when the Pope learned of the arrests of the Jews, he immediately ordered an official Vatican protest with the German ambassador, which he knew would no doubt be fruitless.

“The Pope then sent his nephew, Prince Carlo Pacelli, to meet with Austrian Bishop Alois Hudal. Bishop Hudal, head of the National Church of Germany in Rome, was by some accounts, sympathetic to the Nazi’s and had good relations with them. Prince Carlo Pacelli told Hudal that he was sent by the Pope, and that Hudal must write a letter to the German Governor of Rome, General Rainier Stahel, to demand that the arrests stop.”

Bishop Hudal’s letter to General Stahel stated: “Just now, a high Vatican source […] reported to me that this morning, the arrest of the Jews of Italian nationality has started. In the interest of a peaceful dialogue between the Vatican and the German military command, I ask you with urgency to give order to immediately stop these arrests in Rome and the surrounding area. The German reputation in foreign countries requires such a measure and also the danger that the Pope would openly protest against it.”

The letter was then hand-delivered to General Stahel by a close confidant to Pope Pius XII, German Father Pancratius Pfeiffer, superior general of the Society of the Divine Savior, who personally knew General Stahel.

The following morning, General Stahel responded by telephone: “I forwarded the affair immediately to the local Gestapo and to Himmler personally, Himmler ordered that, concerning the special status of Rome, these arrests are to be stopped immediately.”
These events are further confirmed by the testimony obtained during the investigation of relator (high Judge) to the cause of Pius XII, Jesuit Priest Father Peter Gumpel.

Father Gumpel stated that he personally spoke to General Dietrich Beelitz, who was then liaison officer between Kesselring’s office and Hitler’s command. General Beelitz listened in to the Stahel-Himmler telephone conversation and confirmed that General Stahel used a threat of military failure to Himmler if the arrests were to continue.

Exemptions
An additional document titled “The direct actions to save innumerable persons of the Hebrew nation” states that Bishop Hudal managed — through his contacts with Stahel and Colonel Baron von Veltheim — to get “550 religious colleges and institutions to be exempt from inspections and visitations of the German military Police.”

Just in one of these places, the Institute of St. Joseph, 80 Jews were being hidden.

The note also mentions the involvement “for a great part” of Prince Carlo Pacelli, the nephew of Pius XII. “The German soldiers were very disciplined and respected the signature of a high German official … Thousands of local Jews in Rome, Assisi, Loreto, Padua etc. were saved due to this declaration.”

Michael Hesemann stated that it is obvious that any public protest by the Pope when the train departed could have triggered the resumption of the arrests.

In addition, Hesemann explains that Pave the Way has on its Web site the original SS order to arrest 8,000 Roman Jews, who were to be sent to the work camp at Mauthausen — to be held as hostages — not the death camp in Auschwitz. One may speculate that the Vatican may have felt they could negotiate their release.

We have learned that it was also Bishop Hudal who was acknowledged by the Vatican as actively participating in helping some Nazis war criminals escape arrest after the war’s end.
Because of his political position, Bishop Hudal was persona-non-grata at the Vatican and in fact, was chastised in writing by the Vatican Secretary of State, Cardinal Giovanni Battista Montini (later Pope Paul VI), for even suggesting that Vatican help any Nazi escape arrest.

Gary Krupp, President of Pave the Way, further commented that “Pave the Way has devoted vast resources in order to obtain and post publicly all of this information for historians and scholars. Curiously, none of the most outspoken critics of Pope Pius XII, has bothered to either come to the open Vatican Archives (completely opened since 2006 up to 1939) for original study, or even accessed our restricted free Web site, according to sign in sheets in Rome and our registration records.”

Krupp further commented that he has the sincere hope that the scholarly representatives of the Roman Jewish community, research original materials only steps from their homes.

“I believe they will find that the very existence today of what Pope Pius XII called ‘this vibrant community’ is because of the secret efforts of Pope Pius XII to save every life,” said Krupp. “Pius XII did what he could, while under the threat of invasion, death, surrounded by hostile forces and infiltrated by spies.”

Elliot Hershberg, chairman of Pave the Way Foundation, added: “In the service of our mission, we are committed to try to bring some resolution to this controversy, which affects over 1 billion people.
“We have used our international connections and trust to obtain and post on our free restricted Web site over 46,000 pages of original documents, original news articles, video eyewitness, and scholarly interviews in order to spoon-feed this documentation to the historians and scholars.

“The international publicity from this project has yielded new documentation almost weekly, which show how we have moved to eliminate the academic logjam that has existed since 1963.”

This entry was posted in Popes and tagged Pave the Way Foundation, Zenit.Org.. Bookmark the permalink.