I recently visited a beautiful  moated Elizabethan house in the Worcestershire countryside.

This house is however, very spectacular. This  moated manor was during penal times  a recusant household belonging to the Pakington family. Its name – Harvington Hall. 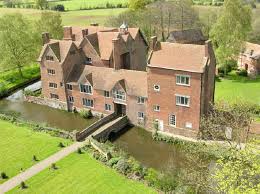 It is now owned by the Diocese of Birmingham, and although Harvington merits a post all of its own,  it also has the most number of ‘priest holes (or ‘hides’) still existing in such a house. These were all built by one man – Nicholas Owen, who, when arriving at Harvington and having brought craftsmen with him, always worked with them on a ‘legitimate’ carpentry task, leaving the construction of the priest hides as a solitary occupation lest his work aroused suspicion.

These ‘hides’ and the proud boast that no priest was ever discovered at Harvington ,( not I might add for want of them being hunted and the house searched many times,) are due to the skills of one man – St. Nicholas Owen.

As we have had some posts on the 40 Martyrs of England & Wales, and due to my recent visit, I am pleased to post on this perhaps least known of the 40 Martyrs who was responsible for a network of similar ‘hides’ in may recusant households in our country. God alone knows how many of our priests were saved from martyrdom by the skills of this practical, saintly man.

Nicholas Owen enrolled as an apprentice to the Oxford joiner William Conway on the feast of the Purification of Blessed Mary, February 2nd ,1577. He was bound for a period of eight years and the papers of indenture state that he was the son of Walter Owen, citizen of Oxford, carpenter. Oxford at the time was strongly Catholic. The Statute of artificers determined that sons should follow the profession into which they were born. If he completed his apprenticeship it would have been in 1585. We know from Fr. Gerard that he began building hides in 1588 and continued over a period of eighteen years when he could have been earning good money satisfying the contemporary demand for well-made solid furniture.

Fr. Garnet in a letter dated 1596 writes of a carpenter of singular faithfulness and skill who has traveled through almost the entire kingdom and, without charge, has made for Catholic priests hiding places where they might shelter the fury of heretical searchers. If money is offered him by way of payment he gives it to his two brothers; one of them is a priest, the other a layman in prison for his faith.

Why should priests need hiding places? From 1585 it was considered treason, punishable by a traitor’s death, to be found in England if a priest had been ordained abroad. Of Owen, the modern edition of Butler’s Lives of the Saints says: “Perhaps no single person contributed more to the preservation of Catholic religion in England in penal times”.

In the aftermath of the Gunpowder Plot, 1605, the result of the frustration of a group of young Catholics when, after dropping hints of toleration, James I made it clear that there would be no relaxation of anti – Catholic legislation, the hunt for priests accused of complicity centred on Hindlip House. This had been provided with hiding places by Nicholas Owen which proved undetectable. He himself was there and when he emerged after four days of hiding he was arrested.

Contrary to English law, which forbade the torture of a man suffering from a hernia, as he was, he was racked day after day, six hours at a time. He died under torture without betraying any secret – and he knew enough to bring down the entire network of covert Catholics in England.

He was canonized in 1970, not merely for his endurance but for his sanctity, attested by his contemporaries. The anniversary of his death is March 2nd, which is also his feast day.

The following description of the death of St Nicholas Owen is taken from The Gunpowder Plot by Antonia Fraser:

“Most brutal of all was the treatment given to Nicholas Owen, better known to the recusants as Little John. Since he had a hernia caused by the strain of his work, as well as a crippled leg, he should not have been physically tortured in the first place. But Little John, unlike many of those interrogated, did have valuable information about the hiding places he had constructed; if he had talked, all too many priests would have been snared‘like partridges in a net’. In this good cause the government was prepared to ignore the dictates of the law and the demands of common humanity. A leading Councillor, on hearing his name, was said to have exclaimed: “Is he taken that knows all the secret places? I am very glad of that. We will have a trick for him.”
The trick was the prolonged use of the manacles, an exquisitely horrible torture for one of Owen’s ruptured state. He was originally held in the milder prison of the Marshalsea, where it was hoped that other priests would try to contact him, but Little John was ‘too wise to give any advantage’ and spent his time safely and silently at prayer. In the Tower he was brought to make two confessions on 26 February and 1 March. In the first one, he denied more or less everything. By the time of the second confession, long and ghastly sessions in the manacles produced some results (his physical condition may be judged by the fact that his stomach had to be bound together with an iron plate, and even that was not very effective for long). Little John admitted to attending Father Garnet at White Webbs and elsewhere, that he had been at Coughton during All Saints visit, and other details of his service and itinerary. However, all of this was known already. Little John never gave up one single detail of the hiding places he had spent his adult life constructing for the safety of his co-religionists.
The lay brother died early in the morning of 2 March. He died directly as a result of his ordeal and in horrible, lingering circumstances. By popular standards of his day, this was a stage of cruelty too far. The government acknowledged this in its own way by putting out the story that Owen had ripped himself open with the knife given him to eat his meat – while his keeper was conveniently looking elsewhere – rather than face renewed bouts of torture. Yet Owen’s keeper had told a relative who wanted Owen to make a list of his needs that his prisoner’s hands were so useless that he could not even feed himself, let alone write.
The story of the suicide was so improbable that neither Owen’s enemies nor his friends, so well acquainted with his character over so many years, believed it. Suicide was a mortal sin in the Catholic Church, inviting damnation, and it was unthinkable that a convinced Catholic like Nicholas Owen should have imperilled his immortal soul in this manner.