VATICAN CITY, 28 JUL 2011 (VIS) – Following are highlights of the activities of Pope Benedict XVI and of the Holy See for the months of January to July 2011. 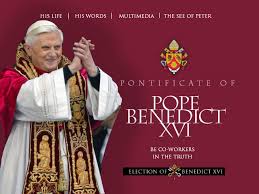 14: Benedict XVI authorises the Congregation for the Causes of Saints to
promulgate the decree of the miracle attributed to the intercession of Venerable Servant of God John Paul II (Karol Wojtyla).

15: In accordance with the provisions of the Apostolic Constitution
“Anglicanorum coetibus” of Pope Benedict XVI (4 November 2009), the Congregation for the Doctrine of the Faith erects a Personal Ordinariate within the territory of England and Wales for those groups of Anglican clergy and faithful who have expressed their desire to enter into full visible communion with the Catholic Church. The Decree of Erection specifies that the Ordinariate will be known as the Personal Ordinariate of Our Lady of Walsingham and will be placed under the patronage of Blessed John Henry
Newman.

24: Presentation of the Holy Father’s Message for the forty-fifth World Day of Social Communications, on the theme: “Truth, Proclamation and Authenticity of Life in the Digital Age”. The Day is celebrated on 5 June.

24: Benedict XVI receives a group from the Evangelical Lutheran Church of Germany, visiting Rome for the close of the Week of Prayer for Christian Unity.

25: Publication of the Pope’s Message for the eighty-fifth World Mission Day, which falls on Sunday 23 October. The theme of the document is: “As the Father has sent me, so I send you”.

1: Publication of a Message from Benedict XVI to the second Latin-American Continental Congress for Vocations, being held in Cartago, Costa Rica, from 31 January to 5 February.

3: Presentation of Benedict XVI’s Message for the nineteenth World Day of the Sick, to be held on 11 February

3: Benedict XVI receives the Letters of Credence of Alfons M. Kloss, the new
ambassador of Austria to the Holy See.

10: Publication of the Pope’s Message for the forth-eighth World Day of Prayer for Vocations, to be celebrated on 15 May on the theme: “Proposing Vocations in the Local Church”.

17: The Holy Father receives in audience Dimitry Medvedev, president of the Russian Federation.

18: Benedict XVI receives a group of prelates from the Catholic Bishops’ Conference of the Philippines at the end of their “ad limina” visit.

22: Presentation of the 2011 Lenten Message of the Holy Father Benedict XVI, entitled: “You were buried with Him in Baptism, in which you were also raised with Him”.

24: The Holy Father receives in audience Michel Sleiman, president of the Republic of Lebanon.

28: The Holy Father receives in audience Jerzey Buzek, president of the European Parliament.

1: A new “Law concerning citizenship, residency and access” to Vatican City, promulgated by Benedict XVI on 22 February, Feast of the Chair of St. Peter, comes into effect today.

3: The Holy Father receives in audience Sebastian Pinera Echenique, president of the Republic of Chile.

3: Benedict XVI receives a group of prelates from the Catholic Bishops’ Conference of the Philippines at the end of their “ad limina” visit.

4: The Holy Father receives in audience Olafur Ragnar Grimsson, president of the Republic of Iceland.

10: Presentation of the second volume of Benedict XVI’s book on Jesus of Nazareth: “From the Entrance into Jerusalem to the Resurrection”.

15: Activation of a new Facebook page concerning John Paul II in view of his beatification, at the address: http://www.facebook.com/vatican.johnpaul2.

16: Publication of a Message from the Holy Father addressed to Giorgio Napolitano, president of the Italian Republic, for the 150th anniversary of the political unity of Italy, on 17 March.

18: Presentation of the “Courtyard of the Gentiles”, an initiative by the Pontifical Council for Culture involving two days of meeting and dialogue between believers and non-believers in Paris, France, on 24 and 25 March.

20: Benedict XVI makes a pastoral visit to the Roman parish of St.
Corbinian, where he celebrates Mass and consecrates the new church.

25: The Pope grants the “Ecclesiastica Communio” requested of him in accordance with canon 76 para. 2 of the Code of Canons of the Eastern Churches by His Beatitude Bechara Rai, canonically elected as Patriarch of Antioch of the Maronites by the Synod of Bishops of the Maronite Church meeting in Bkerke, Lebanon, on 15 March.

27: Benedict XVI visits Rome’s “Fosse Ardeatine” to commemorate the 335 victims executed there in 1944 by German occupying forces in Rome, in reprisal for a bomb attack which had left thirty-three Germans dead.

28: The Holy Father receives in audience His Beatitude Chrysostomos II, archbishop of New Justiniana and All Cyprus, primate of the Orthodox Church of Cyprus, accompanied by Fr. Demosthenis Demosthenous and by Ioannis Charilaou.

1: Law 127 concerning the prevention and countering of the laundering of proceeds from criminal activities and of the financing of terrorism comes into force. The Law was published on 30 December 2010 together with the Supreme Pontiff Benedict XVI’s “Motu Proprio” Apostolic Letter on the same subject.

7: The Holy Father receives in audience a group of bishops of the
Syro-Malabar rite, at the end of their “ad limina” visit.

11: Benedict XVI receives the Letters of Credence of Filip Vucak, the new ambassador of Croatia to the Holy See.

11-13: Meeting of the Commission established by Benedict XVI in 2007 to study the most important issues regarding the Catholic Church in China.

12: Publication of a decree by the Congregation for Divine Worship and the Discipline of the Sacraments establishing that the annual celebration of the Memorial of Blessed John Paul II be inserted into the calendar of the diocese of Rome and the dioceses of Poland, on 22 October.

13: Presentation of “Youcat”, the Catechism of the Catholic Church aimed at the young, which will be distributed to participants in the twenty-sixth World Youth Day, to be held in Madrid from 16 to 21 August.

14: The Holy Father receives in audience Valdis Zatlers, president of the Republic of Latvia.

16: Benedict XVI, on his eighty-fourth birthday, receives the Letters of Credence of Maria Jesus Figa Lopez-Palop, the first woman to serve as Spain’s ambassador to the Holy See.

18: Cardinal Giovanni Saldarini, archbishop emeritus of Turin, Italy dies at the age of 86.

29: Inauguration of the exhibition: “John Paul II: Homage of Benedict XVI for the Beatification” in the Charlemagne Wing under the colonnade of St. Peter’s Square.

30: Prayer vigil in preparation for the beatification of John Paul II, held in Rome’s Circus Maximus in the presence of 200,000 people.

1: Second Sunday of Easter and Divine Mercy Sunday, Benedict XVI presides at the rite of beatification of John Paul II.

2: Holy Father receives in audience Bronislaw Komorowski, president of the Republic of Poland.

2: Cardinal Secretary of State Tarcisio Bertone S.D.B. presides at a Mass of thanksgiving for the beatification of Pope John Paul II.

3: The mortal remains of Blessed John Paul II are laid in the Chapel of St. Sebastian in the Vatican Basilica.

16: Holy Father receives a group of prelates from the Conference of Catholic Bishops of India at the end of their “ad limina” visit.

21: Benedict XVI converses via satellite with the crew of the International Space Station, on the occasion of the space shuttle Endeavour’s last mission.

24: Presentation of the document “Family: Work and Celebration”, a preparatory catecheses for the seventh World Meeting of Families. The gathering will take place in Milan, Italy, from 30 May to 3 June 2012.

26: Benedict XVI presides at the Rosary in the basilica of St. Mary Major, together with the bishops of Italy, and entrusts the people of Italy to the Blessed Virgin Mary on the occasion of the 150th anniversary of the country’s political unification.

30: Holy Father receives a group of prelates from the Conference of Catholic Bishops of India at the end of their “ad limina” visit.

17: Benedict XVI receives a group of Indian prelates (from Madras-Mylapore, Madurai, Pondicherry and Raipur), who have just completed their “ad limina” visit.

19: Holy Father makes a pastoral visit to the diocese of San
Marino-Montefeltro.

27: Presentation of the new Vatican internet portal “news.va”, to be
inaugurated by the Pope on 28 June, eve of the Solemnity of Sts. Peter and Paul.

29: Solemnity of Sts. Peter and Paul, Apostles, sixtieth anniversary of Benedict XVI’s ordination to the priesthood.

30: Benedict XVI confers the first “Ratzinger Prize”, an award established by the “Vatican Foundation: Joseph Ratzinger – Benedict XVI”, to: Manlio Simonetti, an Italian layman and scholar of ancient Christian literature and Patrology; Olegario Gonzalez de Cardedal, a Spanish priest and professor of systematic theology, and Maximilian Heim, a German Cistercian, abbot of the monastery of Heiligenkreuz in Austria and professor of fundamental and dogmatic theology.

4: The Holy Father inaugurates an exhibition in the Vatican’s Paul VI Hall, entitled: “The splendour of truth, the beauty of charity: Homage of sixty artists to Benedict XVI for the sixtieth anniversary of his ordination to the priesthood”.

5: The Pope visits the headquarters of the “Osservatore Romano” newspaper, currently celebrating the 150th anniversary of its foundation. Its first edition appeared on 1 July 1861.

13: Archbishop Rino Fisichella, president of the Pontifical Council for Promoting the New Evangelisation, announces a new pastoral initiative being promoted by his dicastery. The initiative has the name of “Metropolis Mission” and will begin in Lent 2012.

This entry was posted in Pope Benedict, Vatican Information Services. Bookmark the permalink.