“Non Prævalebunt.” How and Why Benedict XVI Is Standing Up to the Attacks

Earlier this year we posted on ‘Why they attack the Pope’. Sandro Magister (www.chiesa.espressonline.it) continues looking at the attacks on our Holy Father from both within the Church, and outside the Church.

The crisis of the Church is not resolved with the practical changes requested by its critics, but with a more lively and more real faith. Joseph Ratzinger was absolutely convinced of this as already as a cardinal. A memorable clash between him and a French archbishop helps to explain his current conduct as pope 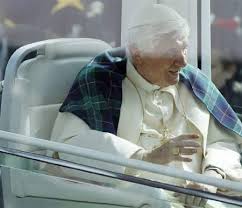 ROME, August 1, 2011 – In the heart of this summer, the attacks against Benedict XVI have suddenly picked up steam again, from outside and inside of the Church.

From the outside, there has been the frontal attack – of unprecedented harshness – of Irish prime minister Enda Kenny, who accused the Catholic hierarchy, even at the highest levels, of protecting pedophile priests from the rigors of earthly justice. Kenny even found a guilty seat for Joseph Ratzinger, because of this statement when he was a cardinal: “Standards of conduct appropriate to civil society or the workings of a democracy cannot be purely and simply applied to the Church.”

In an editorial, the “Financial Times” also sided with the Irish prime minister and against the Catholic Church. In Ireland, a law is being considered that would require priests to inform state agencies of any sexual abuse of minors learned about in the sacrament of confession.

From within the Church, meanwhile, a new onslaught of demands has emerged on the part of droves of priests in Austria, the United States, Australia, and little by little in other countries, calling for the abolition of clerical celibacy, the conferral of priestly ordination on women, communion for divorced and remarried persons.

What ties all of these attacks together is the pressure to make the Church conform to the practices of the modern democracies, and imitate the dominant cultural currents.

At closer inspection, the reform of the Church demanded by these accusers has at its center not doctrinal changes, but the modification of its organization and discipline. Orthodoxy does not matter to them, but orthopraxy does: it is the practical rules of the Church that must be changed and brought into step with the times.

It is precisely of this that Benedict XVI is accused: of insisting on the truth of doctrine, and rejecting the practical innovations that the Church needs.

In reality, the current pontificate is also characterized by an important series of normative changes in the areas of liturgy, finance, law, ecumenism, to the point that authoritative scholars of ecclesiastical law dedicated a recent conference precisely to “Benedict XVI, canonical legislator.”

The conclusions of the conference are found in this article from http://www.chiesa:

But in what sense does Benedict XVI see himself as a “legislator”?

To answer this question, it is helpful to go back to before his election as pope: to a talk given by Cardinal Ratzinger in Paris, at the Sorbonne. A talk that was followed by a lively debate between himself and the archbishop of Bordeaux at the time, Cardinal Pierre Eyt, also a member of the congregation for the doctrine of the faith of which Ratzinger was prefect.

It was November 27, 1999. Ratzinger entitled his talk “Truth of Christianity?” And anyone who rereads it will find it in extraordinary harmony with the lecture he gave as pope in Regensburg on September 12, 2006.

“Looking at the past, we can say that the power that transformed Christianity into a worldwide religion lies in the synthesis that it achieved among reason, faith, and life, briefly indicated with the expression ‘religio vera’.”

That is, precisely, from Christianity’s “claim of truth,” at a time in which for many men there are no longer certainties, but only opinions.

Cardinal Eyt reacted to these theses a few days later, in the December 9, 1999 issue of the Catholic newspaper “La Croix.”

He objected that the “institutional problems” of the Church are not at all secondary, as Ratzinger had maintained.

Bishops and cardinals, in Eyt’s view, must every day “decide and take positions with urgency.” They cannot dawdle, because every day “their backs are against the wall.” Under the provocations of the sensibility of today, “we must put our conceptions and practices to the test a little bit more.”

Which practices? By way of example, Cardinal Eyt cited the remarks of Cardinal Carlo Maria Martini at the synod that year, which had indicated the following questions as requiring change: “the role of women in society and in the Church, the participation of laypeople in some ministerial responsibilities, sexuality, matrimonial discipline, the relationship with the sister Churches of Orthodoxy, the need to revive ecumenical hopes, the relationship between democracy and values, between civil law and morality.”

Ratzinger counterreplied on December 30, in “La Croix.” And the first two points of his reply were the following:

“I cannot agree on this point. The relationship between faith and reason, in fact, is an original option of the Christian faith already formulated clearly in the prophetic and wisdom literature of the Old Testament, and then revisited decisively by the New Testament. The claim, in the face of mythical religion and politics, of being a faith in relationship with the truth and thus responsible with respect to reason, belongs to the essential self-definition of the biblical heritage, a heritage that preceded Christian mission and theology and that, even more, made them possible.

“The relationship with human law, instead, was developed only gradually beginning in the fourth century, and, with respect to the decay of the structures of the empire, was never able to attain in the West the same significance that it had in the Church of the Byzantine empire. This is a matter of a secondary option, which was introduced in a particular era and could also disappear again. It is certainly true that there is a fundamental mutual relationship between law and the Church, but this is a question independent of the other.

“2. My confrere of the college of cardinals maintains that I undervalue the meaning of the institutions. It is an indisputable fact that the Christian faith, from its origins, did not want to be only an idea, that it entered into the world endowed with institutional elements (apostolic function, apostolic succession) and that, therefore, the institutional form of the Church belongs by essence to the faith. But the institutions cannot survive if they are not sustained by common fundamental convictions, and if there is not an emphasis of values that establishes its identity.

“The fragility of this emphasis is – I repeat – the specific reason for the current crisis of the Church. Cardinal Eyt is right to remind me of the institutional decisions that I must make on a daily basis. But it is precisely here that the connection becomes clear for me. Wherever the decisions of the magisterium on values decisive for the identity of the ecclesial institution can no longer count on a common conviction, they are necessarily perceived as repressive, and remain, in the final analysis, ineffective.

“Those who defend the Trinitarian doctrine, the Christology, the sacramental structure of the Church, its origin in Christ, the function of Peter or the fundamental moral teaching of the Church etc., and must combat the negation of these as incompatible with the ecclesial institution, are shooting in the dark if the opinion spreads that all of this [truth as a whole] is without importance. In this way, an institution becomes an empty shell and falls into ruin, even if it remains powerful on the outside or gives the appearance of having solid foundations.

“Because of this, the institutional decisions of the magisterium can become fruitful only on the condition that they are connected to a serious and determined fight for a new emphasis of the fundamental options of the faith.”

Returning to today, in seeing Ratzinger at work as “legislator pope,” it might seem that he has changed his mind: that is, that the institutions, systems, and canonical norms are no longer something “secondary” for him.

But that’s not the case. Every time that Benedict XVI legislates – for example, by liberalizing the Mass in the ancient Roman rite or reinforcing the norms against the “delicta graviora” – he does everything he can to demonstrate both the foundation of truth of the decisions made, and their specificity with respect to the laws of the earthly city.

Where this “emphasis of the fundamental options of the faith” is lacking, he is careful to avoid complying with the “provocations of today’s sensibility.”

For him, orthopraxy cannot be separated from orthodoxy, just as “caritas” is such only “in veritate.”

The final paragraph of his 1999 talk at the Sorbonne said exactly this:

“The attempt to restore, in this crisis of humanity, a global significance to the notion of Christianity as ‘religio vera’ must aim simultaneously at orthopraxy and orthodoxy. Its content, now as before, must consist, more profoundly, in the correspondence between love and reason as fundamental pillars of the real: true reason is love, and love is true reason. In their unity, they are the true foundation and the end of all reality.”

19 Responses to “Non Prævalebunt.” How and Why Benedict XVI Is Standing Up to the Attacks