In 1974, a Trabant — an old East German car — was chugging through the Thuringian countryside, a province in the communist German Democratic Republic. 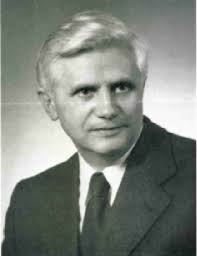 In its passenger seat sat Professor Joseph Ratzinger and at the wheel was Father Joachim Wanke, then an assistant at a local seminary — the only one in the GDR.
The two priests, writes Rainer Erice, a journalist for the German radio station Mitteldeutsche Rundfunk Thüringen (MDR), were on a harmless sightseeing tour, taking in the historic cities of Jena and Weimar. It was a moment of relaxation during Father Ratzinger’s short visit to East Germany, the purpose of which was to give several lectures to students and theologians in Erfurt, Thuringia’s capital.
What gave this visit added significance, however, was that it marked the beginning of covert surveillance of Father Ratzinger by the East German “Stasi”, or secret police

That Professor Ratzinger was spied upon by Stasi informants is already known. In 2005, it was revealed that the East German agents had had files on the newly elected Pope. But now new files, uncovered this week by MDR, add more light on how the secret police viewed the future Pontiff, and who was employed to inform on him.

The documents reveal that in 1974, the Stasi were well aware that Father Ratzinger was a rising star in the Church, but they lacked suitable spooks to track him. All they knew at that stage (from an unofficial informant called Birke, an employee of the bishop of Meissen) was that Professor Ratzinger had given lectures on modern theology to students and academics during his visit.

Intensified efforts
As the theology professor’s role in the Church grew, however, so the East German secret police began to take more of an interest in his activities and stepped up their efforts, according Erice’s report. By the time Archbishop Joseph Ratzinger of Munich visited Berlin in 1978 for a meeting with Cardinal Alfred Bengsch, chairman of the Berlin Bishops’ Conference, the foreign section of East Germany’s homeland security had taken over the task of spying on him and had assigned numerous unofficial informants in both East and West Germany.

The GDR secret service viewed Professor Ratzinger as “conservative, reactionary and authoritarian,” Erice writes, and contended that John Paul II had appointed the then-Cardinal Ratzinger as organizer for “counter-revolutionary development in Poland.” More Stasi notes reveal they considered him as “one of the fiercest opponents of communism”; they believed he supported nuclear deterrence between the East and West military blocs, and that he considered pacifism “unrealistic.”
But Erice adds that despite “several hundred pages” of information on Joseph Ratzinger, there was “little that was meaningful,” and individual reports of foreign espionage had been “almost completely deleted.” The discovered documents related only to “basic information about the author and the occasion of when the information was gathered.”

Yet the documents reveal some interesting facts, namely details about the Stasi agents employed to inform on Joseph Ratzinger. Erice writes that “at least a dozen unofficial employees” were assigned to the task. These included two East German university professors known to the Stasi as “reliable”: Agent “Aurora” was a professor of scientific atheism in Jena and Warnemünde, while Agent “Lorac” worked undercover as a theology professor in Leipzig. Agent “Georg” was in the executive committee of the Berlin Bishops’ Conference and was apparently well versed on the internal workings of the Church.

In West Germany, the Stasi’s network included a Benedictine monk in Trier known by the codename “Lichtblick” (Ray of Hope). Lichtblick spied for the Stasi for decades and, according to Erice, “shared very extensive and reliable reports about Vatican events.” Another unofficial agent, known as “Antonius” was a journalist with the German Catholic news agency KNA and provided “masses” of information about the Pope, Cardinal Ratzinger and the Vatican.

Another journalist was hired in Munich under the alias “Chamois”, while a particularly prominent spy was a politician belonging to the Christian Social Union party and a former confidant of Franz Josef Strauss, once a leader of the party. The agent was known by the codenames “Lion” and “Trustworthy”. Their network also went beyond the borders of Germany. In Italy, the Stasi employed Agent “Bernd” who provided information on the Holy See’s foreign policy.

Shy, but charming
With all these informants in place, Erice writes that the Stasi were well prepared when Joseph Ratzinger travelled to Dresden in 1987 to meet a group of Catholics. “The Stasi mounted a huge effort in monitoring the meeting,” Erice says, and they strove to avoid drawing attention to any surveillance that was taking place, especially when passing through the border. “The security forces were instructed to give him preferential and polite treatment at the border crossing,” say the reports, and that “worldly evils such as customs inspections” usually applied to Western visitors “had to be omitted.”

But despite their great efforts, Erice says the Stasi made some basic mistakes. They incorrectly spelled Cardinal Ratzinger’s native town Merkl instead of Marktl. And although they wanted to portray him negatively, they couldn’t help but make the occasional positive observation. In addition to praising his high intelligence, they noted: “Although he would be shy at first with an interlocutor, he possesses a winning charm.”

Benedict XVI is, of course, not the first Pontiff to have had much of his life closely monitored by secret agents. Blessed Pope John Paul II was heavily spied upon by the KGB and the SB (Poland’s secret police).  According to research revealed by George Weigel in his recent book “The End and the Beginning,” the agencies began taking a keen interest in Karol Wojtyla’s activities after he was made auxiliary bishop of Krakow in 1958.

Weigel recalls that between 1973 and 1974, Polish authorities considered arresting Karol Wojtyla and charging him with sedition. Secret police stalked him on kayaking trips and tried to compromise his closest associates, occasionally bungling their operations. And it wasn’t just the Pope who was in their sights; the Vatican was, too.

“What most surprised me was the sheer magnitude of the effort, which involved millions of man-hours and billions of dollars,” Weigel said in an interview with the National Catholic Register last year. “I was also unaware of the degree to which Soviet-bloc intelligence agencies attempted to manipulate the Second Vatican Council for their purposes — and how unaware of this assault the Vatican seemed to be (and continued to be until 1978).”

This week’s disclosures come just days before Benedict XVI makes a Sept. 22-25 state visit to Germany, which will include a stop in Erfurt.

He will be welcomed to the city by the current bishop of the diocese, his driver on that 1974 visit, Joachim Wanke.
* * *
Edward Pentin is a freelance writer living in Rome.