Biblical Reflection for the 26th Sunday in Ordinary Time A – Are We Faithful and Generous Workers in His Vineyard?

By Father Thomas Rosica, CSB
Immediately preceding today’s Gospel story, Jesus has returned to the Temple (23a) and reclaimed this sacred space for his healing ministry (14) and the stage for teaching and challenging his opponents. The chief priests and elders of the people continue to pressure him: “By what authority are you doing these things and who gave you this authority?” (23b). 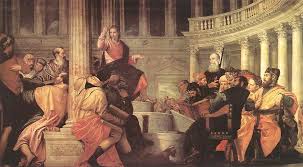 It is God himself who is the source of Jesus’ authority, but stating this fact clearly would be nothing short of blasphemy on Jesus’ part. Instead of directly answering his opponents, Jesus challenges them with his own question about the baptism of John. Those gathered around Jesus refuse to see God at work in John’s ministry. They therefore reject Jesus in the process. This withholding of faith in God and in Jesus is exemplified in Jesus’ opponents’ reaction to John the Baptist.

Today’s story begins by introducing us to the familiar scenario of a father who asks each of his sons to go out and work in the vineyard (Matthew 21:28-32). To a Jewish listener, familiar with Hebrew Scripture, this would already have been an important clue that there would be problems in the story! We need only recall the stories of Biblical brothers, which are almost always stories of conflict, alienation, misunderstanding, competition and tension. We need only recall Jacob and Esau, Isaac and Ishmael, or Joseph and his brothers. Jesus is truly a gifted storyteller who draws his listeners in to the teaching moment. I can only imagine what the listeners were thinking as Jesus began his story: “What do you think? A man had two sons.”

After giving the command, the father expects an answer from them. Not satisfied with mere words, the father desires a real commitment. Initially the first son responds negatively, but then repents, or has a complete change of heart, and goes out to work. The second son acknowledges with lip service his father’s request and gives in, but does not follow through on his promise.
Blindness to God’s work
The two sons represent the religious leaders and the religious outcasts who followed John’s call to repentance. By the answer they give to Jesus’ question (Matthew 21:31), the leaders effectively condemn themselves. As religious leaders, they claim to be faithfully obedient to God, but they are blind to the fact that authentic obedience includes responding in faith to the new things God is doing. In the end, the sinners in Israel, exemplified by the tax collectors and prostitutes who had carelessly ignored the demands of their religion, will take their place in the kingdom, while Jesus’ adversaries will be shut out. Those who would otherwise be judged as outside the reach of salvation because of their rejection of the outward form of religion, may in fact be those who are most sensitive to their need for God’s grace, and thus repent and serve the Master most meaningfully. This same strange and surprising way of God is found in today’s Old Testament reading in which the ways of God and the ways of God’s people stand in stark contrast (Ezekiel 18:25-28).

Insight into the kingdom
Today’s parable gives us a glimpse into the radical nature of the Kingdom of God. Although this parable may contain a judgment on Jewish religious leaders, Matthew intended a much wider application of its message, even to us. In this parable each one of us can recognize his or her own personal experience. We ourselves can become blind to what God is doing in the world around us. Could the parable be speaking about those who seem to be very religious and subservient at the start, but in reality may never sufficiently probe the depths of God’s mercy to truly know the heart and mind of God? The parable is a lesson for those who claim to be Christian, but do not worship as Christians or live the Christian life; compared to those who come to Christ later but never claimed to be righteous.

Today many claim to know Christ but do not live the Christian life. It doesn’t matter so much what you say on the outside if it is not matched by your heart on the inside, or your actions. Lip service to Christ that is merely an outward mouthing of polite promises and pious platitudes is empty by comparison with the inward acceptance of the message that prompts people to repentance and action. What God looks for is the final outcome in people’s lives. God is infinitely patient with us and can certainly tolerate our initial “no” on the way to our final, definitive “yes.”

Evangelization, renewal, enthusiasm
How easily our “church efforts” end up being little more than simply maintaining the institution, with no excitement concerning what God’s active grace is doing and consequently no enthusiasm for true evangelization and renewal. We say that we are going to work in the vineyard but instead of harvesting the grapes we spend our time complaining, moaning, ridiculing, despairing collecting the stones along the path and not rejoicing in the abundant growth that is taking place around us.

Humiliation and exultation
Today’s second reading from St. Paul to the Philippians (2:1-11) contains one of the most beautiful Christological hymns of the New Testament. The short rhythmic lines fall into two parts, verses 6-8 Christ is the subject of every verb, and verses 9-11 where God is the subject. The general pattern is thus of Christ’s humiliation and then exaltation.
Although Paul is in prison and no longer can visit and preach to his beloved community at Philippi, they are not without his intercession and assistance. From his prison cell, Paul begs them to make his joy complete by being of “the same mind” and “having “the same love.” Rather than being caught up in the upward mobility and passing things of the world, of society, of all of our broken and sinful ways of life, we are invited to enter into the downward mobility of Jesus Christ who empties himself in order to find fullness and life.

Jesus and the Law
Consider these excerpts from the Catechism of the Catholic Church:
“The perfect fulfillment of the Law could be the work of none but the divine legislator, born subject to the Law in the person of the Son. In Jesus, the Law no longer appears engraved on tables of stone but ‘upon the heart’ of the Servant who becomes ‘a covenant to the people,’ because he will ‘faithfully bring forth justice.’ Jesus fulfills the Law to the point of taking upon himself ‘the curse of the Law’ incurred by those who do not ‘abide by the things written in the book of the Law, and do them,’ for his death took place to redeem them ‘from the transgressions under the first covenant'” (No. 580).

“The Jewish people and their spiritual leaders viewed Jesus as a rabbi. He often argued within the framework of rabbinical interpretation of the Law. Yet Jesus could not help but offend the teachers of the Law, for he was not content to propose his interpretation alongside theirs but taught the people ‘as one who had authority, and not as their scribes.’ In Jesus, the same Word of God that had resounded on Mount Sinai to give the written Law to Moses, made itself heard anew on the Mount of the Beatitudes. Jesus did not abolish the Law but fulfilled it by giving its ultimate interpretation in a divine way: ‘You have heard that it was said to the men of old. … But I say to you.” With this same divine authority, he disavowed certain human traditions of the Pharisees that were ‘making void the word of God” (No. 581).

This entry was posted in Bible Exegesis. Bookmark the permalink.