A Reflection on the Sin of Gossip 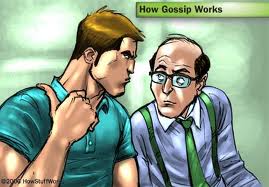 One of the more under-rated categories of sin are the sins of speech. There are many ways we sin, but perhaps the most common way is by speech. Too easily, almost without thought, do we engage in gossip, idle chatter, lies, exaggerations, harsh attacks, uncharitable observations and remarks. With our tongue we can spread hatred, incite fear and maliciousness, spread misinformation, cause temptation, discourage, teach error, and ruin reputations. We can surely cause great harm with a gift capable of such good!

And not only do we sin by commission but also by omission. For frequently we are silent when we should speak. We do not correct when we should. In our age the triumph of evil and bad behavior has been assisted by our silence as a Christian people. Prophets are to speak God’s word but too often we fulfill Isaiah 56:10 which says, Israel’s watchmen are blind, they all lack knowledge; they are all dumb dogs, they cannot bark; they lie around and dream, they love to sleep.

Well did James say: Anyone who is never at fault in what they say is perfect! (James 3:2) And too easily do we dismiss sins of speech as of little account. While it may be true that not every sin of speech is serious or mortal, it is possible to inflict great harm with speech and thus have the matter become very serious, even mortal. Jesus warns, But I tell you that men will have to give account on the day of judgment for every careless word they have spoken (Matt 12:36)

With this in mind, it may be of value to focus in on one aspect of the sins of speech commonly called “gossip.” (I was privileged to be on Catholic Answers Live last night and speak with Patrick Coffin and listeners on this very topic. You can listen to the hour-long broadcast here: Catholic Answers Podcast)

In defining gossip in a general way, the term can merely apply to talk of a personal or trivial nature. But the sin of gossip is more specifically considered to be idle talk or rumor, especially about the personal or private affairs of others. It usually involves uncharitable or inappropriate conversation about others, not present and has a reputation for the introduction of errors and variations into the information transmitted. St Thomas includes it in his treatise on justice (II, IIae 72-76) in the Summa since, by it, we unjustly harm the reputation of others, through either lies or truths shared inappropriately. The Catechism of the Catholic Church includes gossip under its treatment of the 8th Commandment, “You shall not bear false witness against your neighbor.

As he most often does, St. Thomas well distinguishes a number of different forms of gossip (injustice in speech) and we can look at them one by one.

1. Reviling – dishonoring a person, usually to their face, and often in the hearing of others. It is done openly, audibly and is usually rooted in anger and personal disrespect. It may include name-calling, caricature, profanity and even cursing (which will also be treated later). For the most part, we do not consider reviling to be a form of gossip per se, (since gossip is usually conducted apart from the offended person and reviling to their face). But reviling is a sin of speech that ought to be mentioned here, since it is annexed to the general dishonor and harming of the reputation of others that is at the heart of gossip. Reviling as such is intended to cause personal embarrassment or dishonor.

2. Backbiting – Generally we call this today, “talking behind someone’s back.” Backbiting is the secret and quiet injuring of a person’s good name to others. Here the key point is that the injured person is not present either to defend or clarify what is said. There are two forms of backbiting that St Thomas distinguishes:

A. Calumny – which is telling lies about someone behind their back. The written form of this is called slander.
B. Detraction – which is passing on harmful truths about others. What is said is true, but is not necessary information to be shared, and the information has the effect of diminishing a person’s reputation or harming their good name before others. For example, it may be true that Joe has a drinking problem, but it is not necessary information to share.

3. Tale -Bearing – also called tale whispering – This may sound like backbiting, but St Thomas makes a distinction here. Whereas a backbiter seeks to harm the reputation of another absent person, the tale bearer seeks to stir up trouble and arouse people to action against a person. Perhaps he seeks to have others end professional, business, or personal relationships with the one gossiped about. Perhaps his goal is to incite angry responses toward him, or even violence. Perhaps too, some legal action is the desired outcome. But the tale-bearer seeks to incite some action against the one he gossips about, hence it goes further than the harming of reputation, to include the harming of relationships, finances, legal standing, and so forth.

4. Derision – is making fun of a person, perhaps of their mannerisms, perhaps of a physical trait, or personal quality. While some of this can be light-hearted, it often strays into hurtful and humiliating actions or words that diminish someone else’s standing or honor within the community.

5. Cursing – a spoken wish or command that another person be afflicted with some evil or harm. This may or may not be spoken to their face. Here too we see a dishonoring of a person in the presence of others. The usual goal is to incite from others, anger and dishonor towards the injured person. The cursing of a person is considered in the realm of gossip, whereas the cursing of irrational things is considered merely vain or futile speech, though not wholly sin-free.

How serious these sins of speech (forms of gossip) are will depend on a number of factors including the degree of harm caused to a person’s reputation, who and how many overhear, and circumstances of place, time and language used. Lack of intent to harm may lessen the culpability of the sinner, but not the fact of sinfulness of the act. However, to dishonor a person, especially with the intent of harming their reputation or necessary standing before others, can easily become a very serious sin.

One of the most precious things a person has is their reputation, for, on it rests their capacity to interrelate with others and engage in just about every other form of human interaction. It is a very serious thing, therefore, to harm the reputation of another. And while this harm may sometimes be mild, we ought not easily dismiss the possibility that, what we think to be a small matter, might actually cause greater harm that we imagine. St James says of the gossiping tongue: Consider how a great forest is set on fire by a small spark. The tongue also is a fire, a world of evil among the parts of the body. It corrupts the whole body, sets the whole course of one’s life on fire, and is itself set on fire by hell (James 3:11).

It remains true that we sometimes must have necessary conversations about others who are not present. Perhaps we are seeking advice about how to handle a delicate situation. Perhaps we need encouragement in dealing with a difficult person, or need to do legitimate fact-checking. Perhaps, especially in professional settings, we are asked to make and give evaluations of colleagues, employees, or situations. However, in cases like these we need to limit the scope our conversations to what is necessary and include only those who certainly ought to be included.

In seeking personal advice or encouragement we also ought to speak only with others who are trustworthy and can reasonably be of help. Where possible we should exclude unnecessary details, even the name of the person being discussed, (if feasible). Discretion is the key word in these necessary conversations.

It may also be important to balance the avoidance of gossip with a reminder that extreme secrecy may also be unhelpful in a community. There are times when egregious situations must be directly addressed. In cases like these we ought to follow the norms set forth by Jesus in Matthew 18:15-17

If your brother sins, go and show him his fault, just between the two of you. If he listens to you, you have won your brother over. But if he will not listen, take one or two others along, so that ‘every matter may be established by the testimony of two or three witnesses.’ If he refuses to listen to them, tell it to the Church; and if he refuses to listen even to the Church, treat him as you would a Gentile or a tax collector.

Hence, discretion must also give way to some transparency in given circumstances, and communities may need to address some matters publicly and clearly.

But as a consistent rule, we ought to be very careful about sins of speech. Too easily and carelessly we risk ruining the reputation and standing of others by our gossip. Idle chatter about others can bring great harm and draw many others into sin. Scripture says, Set a guard over my mouth, O LORD; keep watch over the door of my lips. (Psalm 141:3). Indeed, Help Lord! keep Your arm around my shoulder and Your hand over my mouth! Put your word in my heart, so that when I do speak, it’s really you.

7 Responses to A Reflection on the Sin of Gossip