VATICAN CITY, 28 SEP 2011 (VIS) – During today’s general audience, celebrated this morning in St. Peter’s Square, Benedict XVI reflected on his recent apostolic trip to Germany, defining it as “a great feast of the faith” during which he had seen “how it is God Who gives our lives their deepest meaning, their true fullness”. 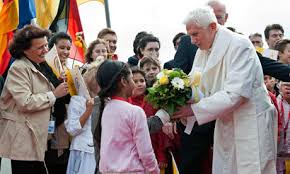 The Pope recalled the various stages of his journey, beginning with his
visit to Berlin where, before the Federal Parliament, he had “expounded on
the foundations of law and the rule of law; that is, the measure for all laws inscribed by the Creator into the very heart of His creation”. After addressing the Bundestag, he had gone on to meet members of the German Jewish community with whom, “having recalled our shared roots of faith in the God of Abraham, Isaac and Jacob, we highlighted the fruits that have
thus far emerged from dialogue between the Catholic Church and Judaism in Germany”. In his subsequent meeting with members of the Muslim community, the Pope had reflected on “the importance of religious freedom for the peaceful development of humankind”.

Benedict XVI then went on to speak of his satisfaction at seeing such large numbers of people in attendance at the Mass he had celebrated at the Olympic stadium in Berlin. On that occasion he had dedicated his homily “to the importance union with Christ has for our personal lives as believers and for our being Church, His mystical body”.

The Holy Father had then gone on to visit the region of Thuringia, cradle of the Protestant Reformation. Hence, said Pope Benedict, “the particular ecumenical emphasis of that second stage of my journey”. In Thuringia he had met with members of the German Evangelical Church Council in the city of Erfurt, where Martin Luther had joined the Augustinian order and been ordained a priest. In the former Augustinian convent of Erfurt “we again saw how important our combined witness of faith in Jesus Christ is in today’s world. … We need to make joint efforts on the journey towards full unity”,
however “only Christ can give us that unity, and we will become increasingly united to Him in the extent to which we return to Him and allow ourselves to be transformed by Him”.

The Pope also mentioned the Vespers he had celebrated at the Marian shrine of Etzelsbach, located on “a strip of land that has always remained Catholic through the vicissitudes of history, and the inhabitants of which courageously opposed the dictatorships of Nazism and Communism”. During Mass
the following day in the Cathedral Square of Erfurt, the Pope had spoken about the patron saints of Thuringia – Elizabeth, Boniface and Kilian – highlighting “the shining example of the faithful who bore witness to the Gospel under totalitarian regimes. I invited the faithful to be saints today, worthy witnesses of Christ, and to contribute to building our
society”, he said.

The Pope went on: “I had a moving encounter with Msgr. Hermann Scheipers, the last living priest to have survived to concentration camp of Dachau. At Erfurt I also had the opportunity to meet some victims of sexual abuse by
clergy, to whom I spoke of my regret and my participation in their suffering”.

The last stage of the Pope’s apostolic trip took him to the archdiocese of Freiburg im Breisgau. There he had presided at a prayer vigil with young people, where “I was happy to see that the faith in my German homeland has a young face, that it is alive and has a future”, he said. “I told them that the Pope trusts in the active collaboration of the young. With the grace of Christ they can bring the fire of God’s love into the world”.

Another outstanding moment of his visit was his meeting with seminarians. “I wanted to show those young men the beauty and greatness of their divine call, and to offer them some help to continue their journey joyfully and in profound communion with Christ”, the Pope said. Referring then to his encounter with representatives from the Orthodox Churches, the Pope laid emphasis on “the shared duty to be a leavening for the renewal of our society”.

Mass celebrated at the airport of Freiburg im Breisgau gave Benedict XVI “the opportunity to thank everyone involved in various areas of ecclesial life, especially the many volunteers who collaborate in charitable initiatives. It is thanks to them that the German Church is able to offer such great assistance to the universal Church, particularly in the mission lands. I reminded them that their precious service will be fruitful as long as it derives from an authentic and living faith, in union with the bishops and the Pope, in union with the Church. Finally, before my return, I addressed a thousand Catholics active in the Church and society, to whom I proposed certain points for reflection on Church activity in a secularised
society, on the call to be free from material and political burdens in order to be more transparent to God”.

“This apostolic trip to Germany”, Pope Benedict concluded, “provided me with an opportunity to meet the faithful of my own homeland, to confirm them in faith, hope and love, to share with them the joy of being Catholic. But my message was also addressed to the German people as a whole, inviting them
to look to the future with trust. It is certain that ‘where God is, there is a future'”.
AG/ VIS