The Angelus – “God Gives Himself Into Our Hands”

VATICAN CITY,  The address Benedict XVI gave yesterday before and after praying the midday Angelus with those gathered in St. Peter’s Square. 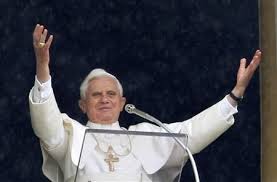 This Sunday’s Gospel closes with Jesus’ warning addressed to the chief priests and elders of the people that is particularly severe: “The Kingdom of God will be taken away from you and given to a people that will bear its fruits” (Matthew 21:43). These are words that make us think of the great responsibility of those who, in every age, are called to work in the vineyard of the Lord, especially with the role of authority; they move us to complete fidelity to Christ. He is the “stone that the builders rejected” (cf. Matthew 21:42), because they judged him an enemy of the law and a threat to public order; but he himself, rejected and crucified, is risen, becoming the “cornerstone” upon which every human existence and the entire world can rest with absolute security.

The parable of the unfaithful tenants, to whom a man gave his vineyard to be cultivated to bear fruit, speaks of this truth. The owner of the vineyard represents God himself, while the vineyard symbolizes God’s people as well as the life that he has bestowed upon us to do good through our commitment and his grace. St. Augustine says that “God cultivates us like a field to make us better” (Sermo 87, 1, 2: PL 38, 531). God has a project for his friends but unfortunately man’s answer is often oriented to infidelity, which translates into rejection. Pride and egoism impede the recognition and acceptance even of God’s most precious gift: his only begotten Son. When, in fact, “he sent them his son,” writes the Evangelist Matthew, “they seized him, threw him out of the vineyard, and killed him” (Matthew 21:37, 39). God gives himself into our hands, he allows himself to be an unfathomable mystery of weakness and manifests his omnipotence in fidelity to a plan of love that, in the end, foresees also punishment for the wicked (cf. Matthew 21:41).

Solidly anchored in faith in the cornerstone that is Christ, we remain in him as a branch that cannot bear fruit on its own if it does not remain in the vine. Only in him, through him and with him is the Church, the people of the New Covenant, built up. In this connection the Servant of God Pope Paul VI wrote: “The first benefit which we trust the Church will reap from a deepened self-awareness, is a renewed discovery of its vital bond of union with Christ. This is something which is perfectly well known, but it is supremely important and absolutely essential. It can never be sufficiently understood, meditated upon and preached” (“Ecclesiam Suam,” August 6, 1964: AAS 56 [1964], 622).
Dear friends, the Lord is always near and working in human history, and he also accompanies us with the unique presence of his angels, whom the Church venerates today as “guardians,” that is, ministers of the divine care for every man. From the beginning until the hour of death, human life is surrounded by their unceasing protection. And the angels are the crown of the august Queen of Victories, the Blessed Virgin Mary of the Rosary, who in the first Sunday of October, precisely at this hour, receives the fervid plea, from the sanctuary in Pompeii and from the whole world, that evil be defeated and the goodness of God be revealed in its fullness.

[Following the Angelus the Holy Father addressed the pilgrims in various languages. In Italian he said:]
Dear brothers and sisters, this afternoon, in Ivrea, Italy, Sister Antonia Maria Verna, foundress of the Institute of the Sisters of Charity of the Immaculate Conception of Ivrea, will be proclaimed blessed. The rite will be celebrated by Cardinal Tarcisio Bertone, my secretary of state. We thank God for the luminous figure of this newly beatified woman, who lived between the 18th and 19th centuries, a model for women who lead the consecrated life and those who are teachers.

[In English he said:]
I greet all the English-speaking pilgrims and visitors present for this Angelus. In particular, I extend cordial greetings to the participants in the Second International Congress on Divine Mercy in Krakow, and to the students from Iona College, Australia. The Gospel of today’s liturgy spurs us to pray for all who work in the Lord’s vineyard, especially where they face violence and threats because of their faith. May God grant them, and all of us, strength in our service to him and to one another. God bless all of you!

1 Response to The Angelus – “God Gives Himself Into Our Hands”