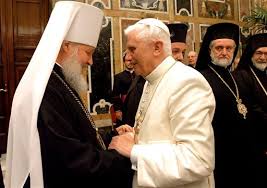 Giacomo Galeazzi
Vatican City
For the Russian Orthodox Church, this is the biggest reform since 1990. The Patriarch of Moscow and All Russia, Kirill has decided to establish new Eparchies throughout the Country. This will be the biggest ecclesiastical restructuring since the fall of the Soviet Union. The territorial reform decided by Moscow involves three new Eparchies in the North Caucasus: a move that some see as an attempt to strengthen Patriarch Kirill’s power. In line with the redefinition of territories which began last March, creating eight new eparchies, three of which are in the North Caucasus, the Holy Synod has given the go ahead for the formation of 13 more eparchies in the regions of Saratov Irkutsk, Orenburg and Ryazan, as well as in Kazakhstan.

Giovanni Farina, Professor of Religious Studies at George Mason University, considers the move a sign of religious re birth in the post-Soviet period. “The opening of new churches is a sign that religion is re-emerging in Russia,” Farina underlined. “But there are numerous others, from new religious movements to actions of great historical faiths.” Some observers, however, see the creation of new eparchies as an attempt by Kirill to consolidate his power, who in Russia represents both a religious and a political figure. “The creation of new eparchies could obviously benefit the Church’s “government” but at the same time, the Patriarch would be bolstering his power. After all, there are always new bishops who depend on him,” Roman Lunkin, President of the association of religious experts, commented.

Vladimir Vigilyansky, spokesman for the Patriarchate of Moscow, pointed out that the reform should improve the “government” of the eparchies, changing the Soviet era structure, according to which an eparchy often stretched thousands of kilometres. Many clergy representatives have welcomed the reform, in the belief that it will help bishops establish tighter relations with the churches in the area. Fr. Andrei, from the Church of the Assumption of the Mother of God in Angarsk, in the region of Irkutsk, stressed that “the problem was that, often, a priest could only see his bishop a few times during his lifetime and the bishop was not informed about daily life in the Church.”

For example, the new eparchy of Irkutsk Bratsk will monitor a number of areas around the city, which is the region’s industrial centre, with a population of approximately 250.000 people. “The bishop of Bratsk can lend his attention to the northern areas, where there are districts that only have one priest,” Fr. Andrei pointed out. Travelling costs will be reduced as some places are only reachable by helicopter. The Orthodox Church currently has 30.142 parishes, 160 Dioceses, 207 bishops and a total of 32.266 clerics.

At the end of January 2009, Kirill (former Metropolitan of Smolensk and Kaliningrad and President of the Patriarchate of Moscow’s Department for External Church Relations, for 20 years) replaced Alexy II, aiming, right from the start of his mission, at a convergence of positions between the Russian Orthodox Church and the Catholic Church on the main current social issues: “Our views are similar on many problems Christians are facing in the modern world. These include aggressive secularisation, globalisation and the erosion of traditional moral principles.”

With regards to the “big freeze” between Moscow and Rome during the papacy of Polish Pope, Karol Wojtyla much of the resistance towards the Holy See, has disappeared over the past few years. “It should be underlined that on the big social questions, Benedict XVI has assumed a similar position to that of the Orthodox Church,” The Patriarch of Moscow declared a year ago, in a report he presented to his Church’s bishops, in the Cathedral of Christ the Saviour. According to the report, differences between Protestant denominations are growing by contrast: “The Russian Church observed that the Protestant communities are collaborating less and less in the efforts being made to preserve the Christian heritage. This is because of a relentless liberalisation in the Protestant world.”

Patriarch Kirill strengthens his position by reforming the Orthodox Church and looks towards Rome in the meantime. In practice, however, there is one thing standing in the way: the Ukraine. The Ukraine is the Russians’ birthplace. Russia rose from Kiev over a millennium ago, out of the Viking principality of Rus, and that is when it converted to Christianity; this is where the prototypes of its faith, art, the liturgy and monasticism are found. But the Ukraine is also home to the world’s largest Catholic Church of the Eastern Rite, with more than five million faithful. We are similar to the Orthodox faith in every aspect, in the Greco-Byzantine liturgies, in our customs and in the clergy’s right to marry. The two churches only differ in terms of showing obedience to the Pope. The Russian Orthodox faithful fear that Rome might decide to place Ukraine’s Greek Catholic Church at the head of the Patriarchate. Nothing would be more intolerable for Russian ecclesiology that a “Roman” Patriarchate that acts as a rival in a land where there is already an Orthodox Patriarchate. All the more so, if one bears in mind the existence of the Patriarchate of Moscow, which has carried the name of “third Rome” since the Sixteenth century. In sum, it all boils down to this: if Rome can show that it does not intend to raise Ukraine’s Greek Church to the Patriarchate, then a meeting between the Russian Patriarch and Benedict XVI can be arranged.