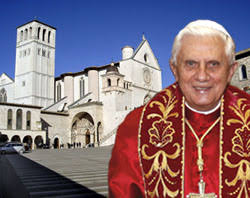 The President of the Pontifical Council for Culture takes stock of the “court of the gentiles,” and explains the presence of non-religious at the interreligious meeting of October 27

“The Pope wanted the Atheists in Assisi.” Cardinal Gianfranco Ravasi, president of the Pontifical Council for Culture, returning from Bucharest, where he received an honorary degree and has chaired a meeting of the “court of the gentiles”, explains to reporters the programs and projects of his department. He also explains how the idea to invite some non-believers to Assisi for the interreligious prayer meeting for peace on the twenty-fifth anniversary of that led by John Paul II in 1986.

“It was an idea of ​​Benedict XVI’s”, says the Cardinal of Milan, “and he himself presented it during a meeting with some cardinals in sight of the preparations for Assisi. ” In doing so, explains Ravasi, “Ratzinger shows that he holds in great esteem an ancient teaching of Christian theology: man is made of natural and supernatural. The supernatural does not remove or destroy nature, but perfects it. It sets itself, that is, an additional element, but does not eliminate human nature. So the invitation of the Pope’s attempt to reassert the importance of the relationship between faith and reason.”

The four atheists who participate in Assisi are the French philosopher and psychoanalyst Julia Kristeva (who will speak before Benedict XVI), the Italian thinker philosophy professor at UCLA in Los Angeles Bodei Remo, the British philosopher Anthony Grayling, which established the New College of Letters and Philosophy, London, and Mexico’s Guillermo Hurtado, founder of the second period of the history and philosophy magazine Dianoia. The day before the meeting in Assisi, October 26, the four will participate in a panel discussion in the main hall of the Rectorate of Roma 3 University.

Mapping out an initial – positive – assessment of the “court of the gentiles,” the initiative of dialogue with non-believers wanted by the Pontiff, Ravasi did not hide a limit and a problem to the encounter: “I realized – he says – that the problem is not atheistic world, that engages in high-level dialogue, and certainly does not consider religion as an element of underdevelopment, but rather indifference, dullness, lack of questioning, banality and sometimes vulgarity … In short, we have to face a somewhat more difficult horizon, a sort of slime.”

In addition to presenting the upcoming events, such as the one scheduled in November in Florence (a dialogue between Moni Ovadia and Sergio Givone, and between Erri de Luca and Antonio Paolucci), Ravasi also responded to questions about possible future horizons of the “courtyard”, speaking specifically about the Middle East. “It’s a dream of mine”, he explained, “to open a dialogue in the territory of the world which is by far the most difficult but also more creative, because there are religions that live their very nature of identity, but they are also growing secular forces in society. It would be nice to bring such a dialogue between believers and non believers to Israel, where the original court of the Gentiles existed.

Finally Ravasi and colleagues presented the new website of the court of the gentiles (www.cortiledeigentili.com) and even his landing on twitter, where the Cardinal (whose profile is @CardRavasi) sends out one biblical thought a day, as well as messages related to his presence at meetings and dialogues.

37 Responses to Atheists in Assisi?