Biblical Reflection for the 29th Sunday in Ordinary Time A

We Are Marked and Sent Into the World

In today’s Gospel (Matthew 22:15), the Pharisees try once again to entrap Jesus in his speech. They realize that they are being portrayed by Jesus as having refused an invitation to conversion of heart (last Sunday’s banquet story 22:1-14). Therefore they begin to plot against Jesus by launching an attack. They begin their questioning by flattering Jesus, attempting to take him off guard. A Pharisee compliments Jesus for being honest, teaching the way of God authentically, and taking no account of any person’s status or opinion. 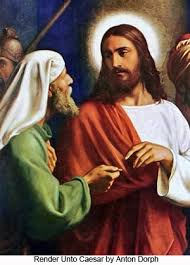 In asking Jesus the question “Is it lawful to pay the census tax to Caesar or not?” they acknowledged that Jesus is qualified to explain the Torah. Jesus was certainly aware of the hidden agenda behind this question, and he understood the challenge before him. The Pharisees intended to force him to take either a position contrary to that held by the majority of the people or one that would bring him into conflict with the Roman authorities.

The significance of the poll tax
The specific tax described in today’s Gospel is a head or poll tax required of every man, woman and slave between the ages of 12 and 65. It amounted to a denarius, that is, a day’s wages. This hated poll tax, instituted in 6 A.D. when Judea had become a Roman province, was fuel on the flames of nationalist opposition to the occupying power. From such sentiments emerged the Zealot movement, which fomented the disastrous Jewish War of 66-70. The Pharisees resisted the poll tax, while the Herodians openly supported the Romans and favored payment of the tax.

If Jesus supported paying tribute to Caesar, he would be discredited as a prophet. If however, he argued against paying this tax, it could be used later to portray him to the Romans as a dangerous revolutionary. Jesus saw through their trap and asked for the coin used to pay the tax. The Pharisees handed Jesus the Roman coin (19). The mere fact of producing this currency indicated their use of it and their acceptance of the financial advantages of the Roman occupation in Palestine.
Jesus inquired about the image and inscription found on the coin. Most Jews considered the coin blasphemous because it had a human representation and violated the commandment against graven images. Its inscription “Tiberius Caesar, august son of the Divine Augustus, high priest” made a claim that rivaled God’s exclusive sovereignty over Israel. The coin was therefore rightly despised by the Jews.

Give to Caesar …
Jesus’ response, “Give therefore to Caesar the things that are Caesar’s, and to God the things that are God’s,” implies that neither the Pharisees nor the Herodians are doing that. This is a serious charge. Those who willingly use the coin that is Caesar’s should repay him in kind. Jesus’ answer avoids taking sides in the question of the lawfulness of the tax.
Jesus is fully aware of the hypocrisy of his opponents, and he does get the better of them, but he does so with the simple truth. Jesus raises the debate to a new level and he does not compromise his integrity and honesty. Those who have hypocritically asked about tax in respect to its relation to the law of God should be concerned, rather, with repaying God with the good deeds that are his due.

Service to God and to Caesar
Two images are before us: that of Caesar and that of God. To the first image, Jesus asks a simple question: “Whose picture is on the coin?” And the answer is simple, “Caesar.” Therefore, give to Caesar what belongs to him, i.e. the part of your possession that belongs to him. But Jesus also has a second, penetrating question: Whose image and blessing is on every human being? And the answer is simple, “God’s.” Therefore, give to God what belongs to him, i.e. your entire being, whole and undivided.

From whom do we receive the blessings of life and to whom do we owe thanksgiving and allegiance? Is it God? Are service to God and to Caesar compatible? Or are they competing loyalties that carry with them divergent senses of blessing? The Lord commands not only to give to God what is God’s (that is, everything), but also to give to Caesar what is Caesar’s, that is to say, to live completely the requirements of justice and peace in social relationships, and to work for the common good.

Cyrus was an instrument in God’s hands
In today’s first reading from Isaiah 45:1, 4-6, we encounter Cyrus, king of Persia. Isaiah tells us that he was “anointed,” a word which originally referred only to those of Israel, but it is applied here to Cyrus because he is the agent of the Lord (45:1). Israel’s period of slavery ended when Cyrus, king of Persia, permitted the Israelites to return to their land and rebuild the temple that had been torn down in Jerusalem. Cyrus represents the Messiah awaited by Israel. He is an image of the promised Redeemer who was to set the People of God free from the slavery of sin and bring them into the kingdom of true freedom. Though he was raised as a pagan, he was anointed of God to be the deliverer of his people. Though he did not know God, he came to know that he was called by God. The Lord God gave everything into Cyrus’ hands for the accomplishment of his purpose. God raised him up specifically for the purpose of delivering the Jews out of Babylon.
Remembering “Gaudium et Spes”

In light of today’s Gospel, let us recall one of the most important Church documents that speaks about the Church’s mission to and involvement in the modern world. The Second Vatican Council’s Pastoral Constitution on the Church, “Gaudium et Spes” offered the Church a new strategy that emphasized neither withdrawal, triumphalism, nor assimilation, but critical conversation (listening and speaking) along with principled cooperation with other social institutions and communities of people. The mission of the Church must be expressed in social categories and has to take seriously the realities of secularization and pluralism. It is good to remember some of the key points of “Gaudium et Spes.”

The Church’s Pastoral Constitution on the Church in the Modern World promoted an attitude of openness to the reality of the presence of the sacred in dimensions of temporal existence too often understood simply as secular, bereft of religious significance.

“Gaudium et Spes” developed a Christian humanism which has shaped the social teaching of both Paul VI and John Paul II, and certainly the mind and work of Joseph Ratzinger, now Benedict XVI. The document provided an understanding of the human person that took into account the contemporary concern for human freedom, equality and solidarity. It helped to redefine the mission of the Church as the sign and safeguard of human dignity. The Pastoral Constitution thus provided a theological basis for the Church’s social mission.

Finally, it suggested an ecclesial strategy for how the Church might engage the world with an attitude of respect and reverence for the activity of the Spirit working through the many events, institutions and communities of our world. The work of “Gaudium et Spes” is far from complete or over. We need further integration of social mission into the center of Catholic life. We need to insist that social ministry is the work of the whole Church, not a task for a few people or an elite group of experts.

Ultimate evaluation of Vatican II
The ultimate evaluation of Vatican II, “Gaudium et Spes,” of all of our pastoral and theological efforts, lies in this key point: If we truly believe that Jesus Christ is the Lord of history, and that our world and our times belong to him, should we not judge our efforts according to the mind and heart of Christ? Should we not evaluate everything we are and do in terms of how well we have opened our eyes and the eyes of others to the radiant and saving beauty of Christ? Should we not ask ourselves if our efforts have deepened our commitment and trust in the kingship, presence and power of Jesus Christ in human history?
If the image of Caesar was stamped on Roman coins that were to be rendered to him, the human heart bears the imprint of the Creator, the one Lord of our life. He has marked us for his own and sent us on mission to the world. Do our human projects make us better prophets, servants and agents of the Kingdom of Jesus? Let us never be ashamed of working publicly for Jesus’ kingdom, and telling people about him. He alone guarantees us authentic joy and deep hope, a real “gaudium et spes” for the people “in our time.” His kingdom will have no end.
Let us pray this week for the courage and wisdom to give simple, truthful answers when we find ourselves in ambiguous and compromising situations. We are marked and blessed with God’s image. Let us never forget to whom we really belong, and why we really do the things we do. We are not called for ourselves, but we are summoned by the Lord and sent to the world, to proclaim his name and his saving works. It is a daunting mission. But it is also cause for rejoicing.
[The readings for this Sunday are Isaiah 45:1, 4-6; Psalm 96:1, 3, 4-5, 7-8, 9-10; 1 Thessalonians 1:1-5B; Matthew 22:15-21]

Basilian Father Thomas Rosica, chief executive officer of the Salt and Light Catholic Media Foundation and Television Network in Canada, is a consultor to the Pontifical Council for Social Communications. He can be reached at: rosica@saltandlighttv.org.