Religious and secular media were quick in reporting on the surprise visit which Benedict XVI and his brother, Msgr Georg Ratzinger, made in early August to a tiny church, a real art jewel etched in the mountains of the Marsica district in Abruzzo.

But these media failed to pose a question, probably because they did not have the answer: how did the Pope come to the decision to select such a unique place in a region known as a treasure chest of hundreds if not thousand ancient churches, convents and monasteries, many of which are of invaluable religious and artistic value, scattered all over its impervious and picturesque territory?

The church in question, until then also almost unknown, is Santa Maria in the Porclaneta Valley (more commonly referred to as church of Santa Maria in Valle or Santa Maria in Porclaneta) , close to the village of  Rosciolo, which is part of the municipality of Magliano dei Marsi, in the province of L’Aquila. Santa Maria in Porclaneta dates back as far as early medieval times and is nested in a grandiose and breath-taking mountain landscape, at the foot of Mount Velino, that with its over 2 500 meters is the third highest peaks in Abruzzo after Gran Sasso and Maiella.

But thanks to an exclusive interview with the local persons involved in the visit on the spot, we are in a position to provide the answer.

This little secret was revealed by Costanza Di Cristofaro, the octuagenarian custodian of Santa Maria in Porclaneta, who has been volunteering on this job for 62 years now. The key person, she said, was the Pontiff’s brother, Msgr. Georg, who had visited the church the year before. “I gave him a copy of the book on the history of the church, asking him to make sure for it to be also passed on to his brother, Pope Benedict”, she went on, hardly concealing a well deserved sense of satisfaction for having somehow contributed to stirring the interest of the Pope and thus prompted his decision to come to Rosciolo to visit a jewel he had never seen before.  “You see, I did pass the book on to my brother”, Msgr. George was said to have quipped upon seeing again Costanza, since he was also accompanying the Pope during his visit there.

The administrator priest attached to the local parish church, Don Vincenzo Angeloni, was the person responsible of overseeing the welcome arrangements for the Pope and his delegation. “The idea of a visit was probably suggested by his brother”, he said, thus confirming Costanza’s recount, “who had already come here the year before and was struck by this temple set here, amidst these mountains”. Few days prior to the Pope’s arrival, he went on, a monsignor from the curia came and tell him that the Pope would be coming on Thursday, August 11th, for a visit, an event that obviously was to be kept as an absolute secret, “and naturally I did so”, don Vincenzo remarked.

“We prepared the church”, he goes on saying, “and punctually at 5 pm the Pope arrived, we first prayed that day’s Vespers of St Clare and then he visited the church, being guided by an art history expert who was part of the Papal retinue”. However, the more one gets to know Don Vincenzo, an almost 90 years old priest ordained in 1941, the more one realises how fitting is the English word “understatement” to describe him: in other words, with all due respect, the impression is that there could not have been a better guide than Don Vincenzo himself, as it occurred during the meeting to the author of this article. Not only did he write the book mentioned above (of which 8000 copies, due to the “Benedict effect”, were totally sold out after his visit), he is also author of another book on the ancient parish church in Rosciolo itself, Santa Maria delle Grazie. Moreover, he said he was delighted to have found out that he shared common passion with Msgr. Georg Ratzinger: music. In fact, Don Vincenzo is also a music expert and composer, and he gladly donated us with a copy of his latest work on music. 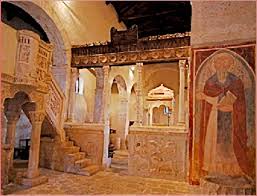 Don Vincenzo recounted, that after the guided tour inside the Chuch, there was a cordial conversation between him and the Pope, mainly focused on past and recent local historical events and Church developments, including the ancient history of the noble house of “conti dei Marsi” (the earls of Marsi), that even gave two saints to the Church: the Patron saint of Sicily, Santa Rosalia, and Bishop Berardus.

The earls of Marsica were a powerful family originated from a noble Frank, Berardus, claiming to be of Carolingian stock (directly descending from Charlemagne) who settled in Abruzzo in late IX – early X centuries replacing the local defeated Longobards’ rule, and under whose aegis, protection and jurisdiction the crucial and documented early stages of our little church came to unfold in the XI century.

But what about the rest of the complex, since the document spoke of a monastery and not just a small church, which is what has been left today? However incredible it may be, the rest of the complex disappeared in the wake of an event which was at the heart of Italian and European medieval history: the crucial battle of Tagliacozzo that took place on August 23rd, 1268, in the nearby Piani Palentini between Conradin of Swabia, the last descendant of the Holy Roman German emperors of the Hohenstaufen line, and the French king Charles I of Anjou.

A battle which was also immortalized by Dante Alighieri in his masterpiece “The Divine Comedy”. However, don Vincenzo pointed out, it’s not clear whether the destruction of the monastery annexed to the church was carried out by the soldiers of Conradine, who notoriously was the standard bearer of the faction opposing the Pope, or by the forces of the Anjou who, in their hot pursuit of the routed enemy soldiers up the hills from where they had descended, set alight the whole area, including the monastery. Interestingly, the prestige of the earls of Marsica reached its apogee after they supported Pope Boniface VIII in the historical vicissitudes known as the “outrage of Anagni” by the King of France Philip IV “the Fair” in 1303. The pope could ultimately save himself also thanks to the support of the earls of Marsica. Therefore, as explained by don Vincenzo, no surprise if the Benedectine, in order to please such valuable and powerful allies, did not spare efforts to restructure and embellish the complex of the church of Santa Maria in Porclaneta by resorting to the most capable and famous artists of the time.

Albeit virtually unknown to today’s public, these artists worked in a church which could not have been more secluded and far away, albeit nested in such a gorgeous setting, leaving us such immortal art treasures in terms of architectural design, sculptures, frescoes and most of all one of the rarest and finest, even unique according to some scholars, examples of iconostasis, which here takes the shape of a sort of elevated wooden trabeation  with inlaid ornamental symbols supported by two little columns, in turn premised on a small wall with stone plates similar to a bas-relief with etched icons depicting episodes of sacred history.

Don Vincenzo is convinced that such feature, the fact that “Porclaneta” is considered a word of Greek origin meaning “rock mantled” and the presence of so many decoration elements of Byzanthine style, have prompted scholars to opine that a community of oriental monks fleeing the iconoclast war raging in the Byzanthine empire under Leo Isauricus in VII-VIII centuries settled in the area, thus starting the building of the church where they reproduced the features of their religious life.

11 Responses to A little secret revealed