ASSISI: RELIGION CAN NEVER BE JUSTIFICATION FOR VIOLENCE

VATICAN CITY, 27 OCT 2011 (VIS) – Today marks the twenty-fifth anniversary of the historic meeting for peace in the Italian town of Assisi, called by Blessed John Paul II. For the occasion, Benedict XVI has made a pilgrimage to the city of St. Francis, accompanied by representatives of other religions and by non-believers, for a Day of reflection, dialogue and prayer for peace and justice in the world under the theme: “Pilgrims of Truth, Pilgrims of Peace”. 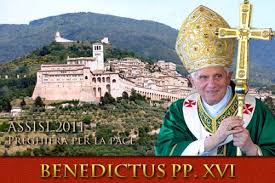 The Pontiff and the members of the various delegations left the Vatican by
train at 8 a.m. today, reaching Assisi at 9.45 a.m. where they were greeted by the civil and religious authorities in front of the Basilica of Santa Maria degli Angeli. As the ceremony unfolded inside the basilica, the large numbers of faithful present were able to follow events on giant screens set up in the square outside.

Following a greeting from Cardinal Peter Kodwo Turkson, president of the Pontifical Council for Justice and Peace, a video was screened in commemoration of the 1986 meeting. Then, one after the other, the representatives of the various religions rose to speak: His Holiness Bartholomew I, Ecumenical Patriarch of Constantinople; Anglican Archbishop Rowan Williams of Canterbury, Primate of the Anglican Communion; Archbishop Norvan Zakarian, Primate of the Armenian Diocese of France; Rev. Olav Fyske Tveit, secretary general of the World Council of Churches; Rabbi David Rosen, representative of the Chief Rabbinate of Israel; Wande Abimbola, spokesperson for the Yoruba faith; Acharya Shri Shrivatsa Goswami, representative for Hinduism; Ja-Seung, president of the Jogye Order of Korean Buddhism; Kyai Haji Hasyom Muzadi, secretary general of the
International Conference of Islamic Schools, and Julia Kristeva,
representing non-believers.

The Holy Father then rose to make his address, extracts of which are given below:

“Twenty-five years have passed since Blessed Pope John Paul II first invited representatives of the world’s religions to Assisi to pray for peace. What has happened in the meantime? What is the state of play with regard to peace today?

“At that time the great threat to world peace came from the division of the earth into two mutually opposed blocs. A conspicuous symbol of this division was the Berlin Wall. … In 1989, three years after Assisi, the wall came down, without bloodshed. … In addition to economic and political factors, the deepest reason for the event is a spiritual one: behind material might there were no longer any spiritual convictions. … For this
victory of freedom, which was also, above all, a victory of peace, we give thanks. What is more, this was not merely, nor even primarily, about the freedom to believe, although it did include this. To that extent we may in some way link all this to our prayer for peace.

“But what happened next? Unfortunately, we cannot say that freedom and peace have characterised the situation ever since. … Violence as such is potentially ever present and it is a characteristic feature of our world. Freedom is a great good. But the world of freedom has proved to be largely directionless, and not a few have misinterpreted freedom as somehow including freedom for violence. Discord has taken on new and frightening
guises, and the struggle for freedom must engage us all in a new way”.

“In broad strokes, we may distinguish two types of the new forms of violence, which are the very antithesis of each other in terms of their motivation and manifest a number of differences in detail. Firstly there is terrorism, for which in place of a great war there are targeted attacks intended to strike the opponent destructively at key points, with no regard for the lives of innocent human beings, who are cruelly killed or wounded in
the process. In the eyes of the perpetrators, the overriding goal of damage to the enemy justifies any form of cruelty. Everything that had been commonly recognised and sanctioned in international law as the limit of violence is overruled. We know that terrorism is often religiously motivated and that the specifically religious character of the attacks is proposed as a justification for the reckless cruelty. … In this case, religion does not serve peace, but is used as justification for violence”.

“The fact that, in the case we are considering here, religion really does motivate violence should be profoundly disturbing to us as religious persons. In a way that is more subtle but no less cruel, we also see religion as the cause of violence when force is used by the defenders of one religion against others. The religious delegates who were assembled in Assisi in 1986 wanted to say, and we now repeat it emphatically and firmly: this is not the true nature of religion. It is the antithesis of religion and contributes to its destruction”.

“As a Christian I want to say at this point: yes, it is true, in the course of history, force has also been used in the name of the Christian faith. We acknowledge it with great shame. But it is utterly clear that this was an abuse of the Christian faith, one that evidently contradicts its true nature. The God in whom we Christians believe is the Creator and Father of all, and from Him all people are brothers and sisters and form one single family. For us the Cross of Christ is the sign of the God Who put ‘suffering-with’ (compassion) and ‘loving-with’ in place of force. … It is the task of all who bear responsibility for the Christian faith to purify the religion of Christians again and again from its very heart, so that it truly serves as an instrument of God’s peace in the world, despite the fallibility of humans.

“If one basic type of violence today is religiously motivated and thus confronts religions with the question as to their true nature and obliges all of us to undergo purification, a second complex type of violence is motivated in precisely the opposite way: as a result of God’s absence, His denial and the loss of humanity which goes hand in hand with it. The enemies of religion – as we said earlier – see in religion one of the principal sources of violence in the history of humanity and thus they demand that it disappear. But the denial of God has led to much cruelty and to a degree of
violence that knows no bounds, which only becomes possible when man no longer recognises any criterion or any judge above himself, now having only himself to take as a criterion. The horrors of the concentration camps reveal with utter clarity the consequences of God’s absence.

“Yet I do not intend to speak further here about State-imposed atheism, but rather about the decline of man, which is accompanied by a change in the spiritual climate that occurs imperceptibly and hence is all the more dangerous. The worship of mammon, possessions and power is proving to be a counter-religion, in which it is no longer man who counts but only personal
advantage. The desire for happiness degenerates, for example, into an unbridled, inhuman craving, such as appears in the different forms of drug dependency. … Force comes to be taken for granted and in parts of the world it threatens to destroy our young people. Because force is taken for granted, peace is destroyed and man destroys himself in this peace vacuum”.

“In addition to the two phenomena of religion and anti-religion, a further basic orientation is found in the growing world of agnosticism: people to whom the gift of faith has not been given, but who are nevertheless on the lookout for truth, searching for God. Such people do not simply assert: ‘There is no God’. They suffer from His absence and yet are inwardly making their way towards Him, inasmuch as they seek truth and goodness. They are ‘pilgrims of truth, pilgrims of peace’. They ask questions of both sides. They take away from militant atheists the false certainty. … But they also challenge the followers of religions not to consider God as their own property, as if He belonged to them, in such a way that they feel vindicated in using force against others.

“These people are seeking the truth, they are seeking the true God, Whose image is frequently concealed in the religions because of the ways in which they are often practised. Their inability to find God is partly the responsibility of believers with a limited or even falsified image of God. So all their struggling and questioning is in part an appeal to believers to purify their faith, so that God, the true God, becomes accessible. Therefore I have consciously invited delegates of this third group to our meeting in Assisi, which does not simply bring together representatives of religious
institutions. Rather it is a case of being together on a journey towards truth, a case of taking a decisive stand for human dignity and a case of common engagement for peace against every form of destructive force. Finally I would like to assure you that the Catholic Church will not let up in her fight against violence, in her commitment for peace in the world. We are animated by the common desire to be ‘pilgrims of truth, pilgrims of peace'”.

Following the meeting in the basilica, Benedict XVI and the delegations made their way to the convent of Porziuncola. A frugal lunch was followed by a period of silence for individual refection and prayer before the participants moved on to the Basilica of St. Francis for the concluding ceremonies of the Day.
PV-ITALY/ VIS