Benedict XVI remembered the priest who lost his life in Dachau concentration camp, “killed during the dark era of National Socialism” 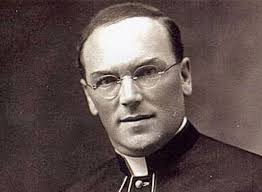 Decapitated in the city of Halle, in the German state of Saxony-Anhalt, at 16:00 on 13 November 1944, Carl Lampert, the Austrian diocesan priest who had been entrusted with the Apostolic Administration in Innsbruck during World War Two, will be beatified today, by Cardinal Angelo Amato, Prefect of the Congregation for the Causes of the Saints, in the capital city of the Tyrol state. After the annexation, he played a leading role in the conflict between the Tyrolese Church and the regional Nazi Administration and in 1939, was arrested and transferred to Dachau concentration camp.

He was freed and confined to Szczecin, but was then arrested again in 1943, along with 40 other people accused of hostile aiding and abetting, of divulging military information and of listening to enemy radio stations. The two trials that followed, led to the priest being sentenced to death. He was decapitated along with two other priests, Herbert Simoleit and Friedrich Lorenz, and died with the names of Jesus and Mary on his lips.

Today, Benedict XVI recognized the priest’s martyrdom and reminded his audience that “during an interrogation that could have led to his freedom, Lampert had said: I love my Church. I remain faithful to my Church and to the priesthood. I am on Christ’s side and I love His Church.”