Fatima: Man’s future is in God – a reminder. 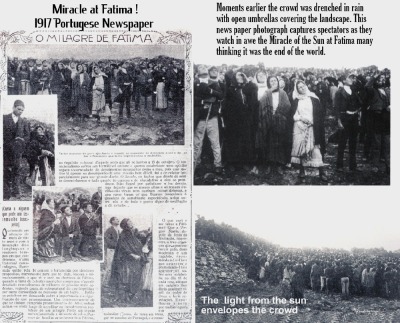 The Miracle of the Sun has been characterized as the greatest supernatural occurrence of the 20th century and does not belong to the domain of faith or science it is an historical event!

The miracle of the sun as viewed by so many in other alleged apparitions did not happen in the same extraordinary manner as at Fatima witnessed by everyone present and in a 70 mile radius by believers and unbelievers alike. This was a supernatural event something only God can do. Other similar manifestations of the Miracle of the Sun at other alleged Marian apparitions may be extraordinary to those who witness them but not supernatural in character. These fall in the realm of preternatural or angelic causes. Then we must discern is this from the good angel or a bad angel. The devil has also appeared to mystics as Jesus and Mary. Bl. Anne Catherine Emmerich and Bl. Anna Maria Taggi both stated that if they had not seen Jesus and Mary previously when the devil appeared as such they would have been deceived. According to present church law the bishop of the diocese has the charisma from God to confirm the authenticity and origin of alleged apparitions occurring within their own diocese. God has the power to convince and bring an unbelieving bishop to his knees as he did for Juan Diego when he opened his tilma and presenting a double miracle, Roses out of season cascading to the floor and a miraculous image of Our Lady imprinted on Juan Diego’s Tilma.Witnesses of the Miracle of the sun, a supernatural historical event, testified to the terrifying nature of the solar miracle.

The Servant of God Fr. John Hardon S.J. asks: “How Does the Solar Phenomenon Confirm the Message of Fatima?”

Maria Carreira stated that: “The sun turned everything in view different colors, yellow, blue, white, and it shook and trembled; it seemed like a wheel of fire which was going to fall on the people. They cried out: ‘We shall all be killed, we shall all be killed!’… At last the sun stopped moving and we all breathed a sigh of relief. We were still alive and the miracle which the children had foretold had taken place. Other people witnessed the solar miracle from a distance thus ruling out the possibility of any type of collective hallucination. A final intriguing, and important, point was that the heat of the sun, as it descended on the people, also had the effect of drying their clothes and the ground, so that they went from being completely soaked to being dry in about ten minutes. The people who witnessed this stupendous event were frightened believing that they were all going to die.

“It was no coincidence that the solar phenomenon at Fatima came only several months after the basic message of Fatima had been communicated to the children. The phenomenon had to have a purpose for its occurrence, and the message had to have a divine confirmation of its authenticity. When the phenomenon occurred in October, it was witnessed by thousands of people, friendly and unfriendly, simple believers and professed skeptics, those disposed to believe Our Lady’s message and others who were openly hostile to what the Blessed Virgin was reported to have said. In God’s providence the hostility of the skeptics was necessary to give rational grounds for believing what the children said the beautiful Lady was telling them. All the reports of those who witnessed the spectacle of the sun testify to their stupefaction at what they saw. No one, not even the most hardened agnostic, doubted that what he saw was a prodigy. This was necessary to provide the rational foundation for accepting, on faith, the Marian message of Fatima because of the solar event which everybody had to accept, as a fact, perceived by the senses.

Why, then, was the solar prodigy of Fatima necessary?   It was necessary in order to satisfy our spontaneous need for giving rational credence to what Mary was telling Lucia, Francisco, and Jacinta. The children did not need the solar phenomenon to believe what Our Lady was telling them. But we do. It is not coincidental that Mary asked her Divine Son to work the miracle at Cana as the first of the signs performed by her Son. Immediately, we are told, his disciples believed in Him. She has been doing the same ever since. As God, He is master of the sun, moon and stars which He created. Her message at Fatima was to tell a sinful world to stop offending the Divine Majesty and to repent of their sins. As at Cana, she asked Jesus to work a miracle. At Cana, as the poet said, the water looked at its Maker and blushed. At Fatima the sun looked at its Maker and whirled in dazzling splendor to acknowledge its Creator.” Excerpt From Soul Magazine Vol. 43 – #5 (Copyright © 1999 by Inter Mirifica)

The Third part of the Secret of Fatima took place during the miracle of the sun and was revealed by Bl. John Paul II during the beatification of Jacinta and Francesco Marto.We learned that during the Miracle of the Sun while everyone was taken up with the solar events the children also witnessed the Angel of God’s descending towards the earth crying out three times in a loud voice that thundered  “PENANCE! PENANCE! PENANCE!” Lucia describes what they saw as those around them were taken up with the solar event that authenticated the Fatima Apparitions: Lucia writes:

“We saw an Angel with a flaming sword in his left hand; flashing, it gave out flames that looked as though they would set the world on fire; but they died out in contact with the splendor that Our Lady radiated towards him from her right hand: Pointing to the earth with his right hand, the Angel cried out in a loud voice:

The events at Fatima that took place during the miracle of the sun were revealed by Bl. John Paul II during the beatification of Jacinta and Francesco Marto.

We learned that during the Miracle of the Sun while everyone was taken up with the solar events the children also witnessed the Angel of God’s descending towards the earth crying out three times in a loud voice that thundered  “PENANCE! PENANCE! PENANCE!” Lucia describes what they saw as those around them were taken up with the solar event that authenticated the Fatima Apparitions: Lucia writes:

..And we also saw in an immense light that is God: ‘something similar to how people appear in a mirror when they pass in front of it’ a Bishop dressed in White ‘we had the impression that it was the Holy Father’. Other Bishops, Priests, Religious men and women were going up a steep mountain, at the top of which there was a big Cross of rough-hewn trunks as of a cork-tree with the bark; before reaching there the Holy Father passed through a big city half in ruins and half trembling with halting step, afflicted with pain and sorrow, he prayed for the souls of the corpses he met on his way; having reached the top of the mountain, on his knees at the foot of the big Cross he was killed by a group of soldiers who fired bullets and arrows at him, and in the same way there died one after another the other Bishops, Priests, Religious men and women, and various lay people of different ranks and positions. Beneath the two arms of the Cross there were two Angels each with a crystal aspersorium in his hand, in which they gathered up the blood of the Martyrs and with it sprinkled the souls that were making their way to God.”

Sister Lucia already gave us an indication for interpreting the third part of the “secret” in a letter to the Holy Father on May 12, 1982. Here Sr. Lucia writes:

“The third part of the secret is a symbolic revelation, and is conditioned by whether we accept or not what the Message itself asks of us: ‘If my requests are heeded, Russia will be converted, and there will be peace; if not, she will spread her errors throughout the world, etc. Since we did not heed this appeal of the Message, we see that it has been fulfilled; Russia has invaded the world with her errors. And if we have not yet seen the complete fulfillment of the final part of this prophecy, we are going towards it little by little with great strides. If we do not reject the path of sin, hatred, revenge, injustice, violations of the rights of the human person, immorality and violence, etc. And let us not say that it is God who is punishing us in this way; on the contrary it is people themselves who are preparing their own punishment. In his kindness God warns us and calls us to the right path, while respecting the freedom he has given us; hence the people are responsible”.

For God’s faithful in this age of apostasy and perversion, it is more necessary now than ever that we carefully heed the admonitions of the Angel and Our Lady with a sincere amendment of life, and increased prayer.

Our Lady asked especially for the five first Saturdays, the daily Rosary with meditation upon the Mysteries, sacrifice of our daily duty, and consecration to the Sacred Heart of Jesus and the Immaculate Heart of Mary.If we hope to persevere in this age of apostasy, we must take to heart and apply in our daily lives the admonition of the Gospels! UNLESS YE DO PENANCE, YOU SHALL ALL LIKEWISE PERISH! These times do not permit anymore “easy living” for those of us who desire salvation. If we do not reject the spirit of the world, we have chosen it for our master — if we continue to live by the material standards of our modern society we shall lose our souls “no man can serve two masters”! Such a difficult truth is not easy to accept for us, who live in a society rotting with the cancer of materialism and glorification of the flesh!

Who is our master? Christ or the world?

What daily penance and mortification do we practice so that we will not “likewise PERISH”? In the second apparition of the Angel in 1916 he told the children: “Offer prayers and sacrifices continually to the Most High. Make everything you do a sacrifice, and offer it as an act of reparation for the sins by which God is offended, and as a petition for the conversion of sinners.” If we chose to scorn these warnings of Divine Mercy that Our Lord is giving through his Mother at Fatima we may soon reap the wrath of Divine Justice, for we have freely chosen it! We must purify ourselves or be purified!

The action of God, the Lord of history, and the co-responsibility of man in the drama of his creative freedom, are the two pillars upon which human history is built.

Fatima reminds us that man’s future is in God, and that we are active and responsible partners in creating that future. What will that future be? It is up to us what we choose to do today.

15 Responses to Fatima: Man’s future is in God – a reminder.