VATICAN CITY, 7 DEC 2911 – Benedict XVI dedicated the catechesis of today’s Wednesday audience, celebrated in the Vatican’s Paul VI Hall, to the Messianic Hymn of Jubilee, Jesus’ prayer of praise recorded in the Gospels of Matthew and Luke, which constitutes the “apex of a path of prayer in which Jesus’ profound and intimate communion with the Father in the Holy Spirit and His divine filiation clearly emerges “.

Already at the opening of the hymn, the Pope observed, Jesus addresses God by calling him Father, a term that expresses “Jesus’ awareness and certainty of being ‘the Son’ in close and constant communion with Him. This is the central point and the source of Jesus’ every prayer. … The name of ‘Father’ is followed by a second title: ‘Lord of heaven and earth'”, which “recalls the great biblical narration of the history of God’s love for human beings that began with creation. Jesus … is the pinnacle and the fullness of this history of love. … Through the expression ‘Lord of heaven and earth’ we also recognize how, in Jesus, the one who reveals the Father, the possibility of access to God is opened to humanity”.

But, to whom does the Son want to reveal the mysteries of God? “Divine revelation”, the pontiff explained, “does not occur within earthly logic, according to which humans are the wise and powerful who posses important knowledge and transmit it to those who are more simple. … God’s style is another: His communication is addressed precisely to the ‘childlike’. … And what is this childlikeness that opens humans to a filial intimacy with God and to welcoming His will? … It is the pureness of heart that allows us to recognize the face of God in Jesus Christ. It is keeping our hearts as simple as those of children, without the presumptions of those who are locked in themselves, thinking they have no need of anyone, not even God”. 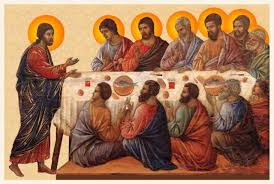 “In Matthew’s Gospel, after the Hymn of Jubilee, we encounter one of Jesus’ most moving pleas: ‘Come to me, all you who labor and are burdened, and I will give you rest.’ Jesus asks that we go to Him, the true wisdom, to the one who is ‘meek and humble of heart’; He proposes His ‘yoke’, the path of evangelical wisdom, which is neither a doctrine to learn nor an ethical proposal, but rather a Person to follow: He himself, the only-begotten Son, in perfect communion with the Father”.

“We also can address God with the confidence of sons and daughters”, Benedict XVI concluded, “calling Him Father when we pray. But we have to keep the heart of a child, the heart of those ‘poor in spirit’, in order to recognize that we are not self-sufficient … that we need God, that we have to seek Him, listen to Him, speak to Him. Prayer opens us to receiving the gift of God, His wisdom who is Jesus himself, in order to accept the will of the Father in our lives and to find consolation in the weariness of our journey”.

At the end of the audience, Benedict XVI greeted the pilgrims present in the hall in their various languages and noted that the Solemnity of the Immaculate Conception, which is celebrated tomorrow, “reminds us of Mary’s singular acceptance of God’s salvific plan. Preserved from any stain of sin in order to be the holy dwelling place of the Incarnate Word, she always trusted fully in the Lord”. The Pope especially urged the youth to make the effort to imitate the Virgin “with pure and clean hearts, letting yourselves be shaped by God who, in you as well, desires to bring about ‘great things'”.