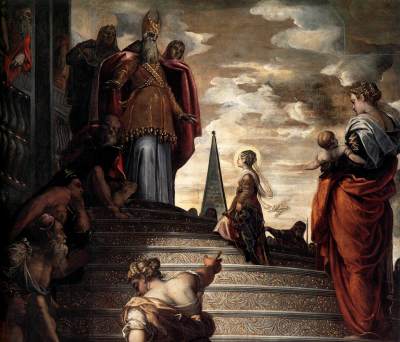 Mary’s Presentation as a Temple Virgin

Previously we examined the tradition and biblical foundation for the Catholic teaching that Mary was consecrated as a Temple virgin at the age of three and lived in the temple precincts till the age of fourteen when she was married to Saint Joseph and there after virginally conceived the Son of God.*

See post: The True Presentation of the Virgin Mary (Foretold in the Book of Sirach)

This school of Temple virgins in Jerusalem formed an altar guild that fulfilled the necessary tasks at the Temple. This included sewing and creating vestments, washing the vestments of the priests which would be stained regularly by animal blood, preparing liturgical linen, weaving the veil of the Temple, and most importantly, liturgical prayer. The Jewish and Catholic tradition holds that this school for Israelite virgins was completed by marrying age of about 14 and that they were dismissed at this time. There were also older women, perhaps widows such as the prophetess Anna, who served as teachers and governesses for the virgins under their care.

There has been some doubt as to whether their were really consecreated Jewish virgins at the Temple. In my previous post I referenced the first-century Jewish historian Josephus in support of “Temple virgins” in Jerusalem, but I fear that this cannot be substantiated. Jimmy Akin asked me for the citation and I cannot find it. One would assume that it would be in Book 5 of the Jewish Wars of Josephus. There Josephus mentions cloisters, but he does not tell us who lived in them. That’s as close as Josephus gets.

There are, however, three Scriptural accounts that are used by Catholics to demonstrate that there were special women who ministered at the Temple complex.

Exodus 38:8 mentions women who “watch (צָבָא) at the door of the tabernacle.”

The second is in 1 Samuel:

“Now Heli was very old, and he heard all that his sons did to all Israel: and how they lay with the women that waited (צָבָא) at the door of the tabernacle:” (1 Samuel 2:22, D-R)

In both of the verses above, Hebrew verb for “watch” and “waited” is the same. It is the Hebrew word צָבָא, which is the same verb used to described the liturgical activity of the Levites (see Num 4:23; 8:24). This corresponds to the Latin translation in the Clementine Vulgate, which relates that these women “observabant” at the temple doors – another liturgical reading.

So these women are not simply hanging out around the Temple, looking for men, gossiping, or chatting about the weather. These are pious women devoted to a liturgical function. In fact, the Court of Women might exist formally for these special “liturgical women.”

The third and final reference to these liturgical females is in 2 Maccabees:

And the virgins also that were shut up, came forth, some to {High Priest} Onias, and some to the walls, and others looked out of the windows. And all holding up their hands towards heaven, made supplication. (2 Macc 3:19-20)

Here are virgins that are shut up. In the Greek it is “αἱ δὲ κατάκλειστοι τῶν παρθένων” or “the shut up ones of the virgins.” In this passage the Holy Spirit refers not to all the virgins of Jerusalem, but to a special set of virgins, that is, those virgins who had the privilege and right to be in the presence of the High Priest and address him. It’s rather ridiculous to think that young girls would have general access to the High Priest of Israel. However, if these virgins had a special liturgical role at the Temple, it becomes clear that they would both address the High Priest Onias and would also be featured as an essential part of the intense supplication in the Temple at this moment of crisis.

There is further testimony of temple virgins in the traditions of the Jews. In the Mishnah, it is recorded that there were 82 consecrated virgins who wove the veil of the Temple:

“The veil of the Temple was a palm-length in width. It was woven with seventy-two smooth stitches each made of twenty-four threads. The length was of forty cubits and the width of twenty cubits. Eighty-two virgins wove it. Two veils were made each year and three hundred priests were needed to carry it to the pool” (Mishna Sheqalim 8, 5).

We also find another reference to this Temple Virgins who “weave linen and silk threads with gold from Ophir, and who are bidden now to cast their work into the flames,” are the women who made the veils for the Temple” (Ketubot 106a). Here we also learn that these virgins lived in the three-storey building inside the Temple area. However, it is difficult to find any other details about this structure. The visions of Anne Catherine Emmerich placed the cloisters of the Temple Virgins on the north side of the Temple.

In the Talmud, it records how when the Romans sacked Jerusalem in AD 70, the Temple virgins leapt into the flames so as not to be abducted by the heathen soldiers: “the virgins who were weaving threw themselves in the flames” (Pesiqta Rabbati 26, 6).

Even more, the first century document by the name of the Apocalypse of Baruch (sometimes called “2 Baruch”) describes the Temple virgins living in the Temple as weavers of the holy veil:

“And you virgins who weave byssus and silk, and gold from Ophir, in haste pick it all up and throw it in the fire that it will return it to its Author, and that the flame will take it back to its Creator, from fear that the enemy might seize it” (2 Baruch 10:19).

So then, there is ample evidence for the role of consecrated women, especially virgins at the Temple. If one were to accept the passages above, we have plenty of testimony for cultic women in the time of Moses’ tabernacle, in the time of David, in the Second Temple era, and in the first century of Our Lord.

This substantiates the claims of the Fathers and Doctors of the Church who claim that the Blessed Virgin Mary was presented to the Temple and served there from the age of three until the age of fourteen. To claim that Temple virgins are a myth of celibacy-crazed Catholic bishops does not hold up. Scripture and Jewish tradition records that there were specially commissioned virgins associated with the Temple. We may not know much about them, but we know that they existed.

That the most holy human girl of all time, the Mother of the Messiah, should live as a temple virgin should come as no surprise. This also accounts for the vow of virginity she had taken since she “knew not a man” even though she was already espoused to Joseph.

Perhaps by a singular inspiration, the High Priest of that time had been inspired to lead this immaculate virgin into the inner sanctum of the Holy of Holies. My heart leaps when contemplating this. The angels of heaven would rejoice to see the true Ark of the Covenant restored into the earthly Temple of Jerusalem. In fact, it would be a foretaste of the glorious assumption of Mary. The Temple represented a new Garden of Eden and, of course, Mary is the New Eve. Thus, her entry into the Temple reveals that the fullness of time has come. The New Eve will soon bring forth the New Adam to reverse the curse and lead the faithful into the presence of God.

This is speculation and I do not want it to obscure the purpose of this post, which is to defend the existence of Temple virgins in Jerusalem. Nevertheless, the presence of the New Eve at or in the Temple certainly is fitting since it hearkens back to the prophecy that the virgin mother will crush the head of the serpent. This is an exciting new perspective at the meaning of Christmas.

Immaculate Mary, dutiful at the Temple, pray for us.

*It is blasphemy to say that the Blessed Virgin Mary was an “unwed mother” or that she conceived Christ “out of wedlock.” Joseph and Mary were married before the angel Gabriel came to her in the Annunciation, and thus she conceived Christ after she was married to Saint Joseph. “The angel Gabriel was sent…to a virgin espoused to a man whose name was Joseph.” Joseph and Mary were “spouses.”