St. Aelred is celebrated by the English Benedictine Congregation today (11th) as the 12th is the celebration of another Benedictine Saint- St. Benet Biscop. 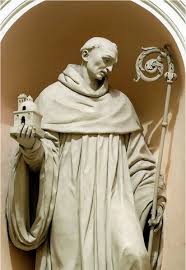 Aelred was born at Hexham, Northumberland, and grew up at the court of King David of Scotland, where he later served as an administrator. On one occasion when Aelred was in Yorkshire on the business of the royal court he heard of the ‘angelic men’ of Rievaulx and, after visiting the community, decided to enter monastic life there. Aelred soon rose to prominence; he became novice-master of Rievaulx and was then sent to lead a new foundation at Revesby, Lincolnshire. In 1147 Aelred returned to Rievaulx and presided as abbot until his death in 1167. Aelred’s charisma and devotion encouraged many to join the community and the number of monks and lay-brothers rose considerably during his abbacy. He played a prominent role in affairs outside the Order, offering advice to rulers and religious communities, and arbitrating in disputes. Aelred’s writings were highly regarded by contemporaries and are still greatly valued. These include his treatises On Spiritual Friendship and The Mirror of Charity, his Rule for the Recluse, various sermons and a life of Edward the Confessor. Shortly after Aelred’s death in 1167 an account of his life was written by his pupil, Walter DanielA contemporary, Jocelin of Furness, gives the following account of Aelred in his Life of St Waldef:

He was a man of fine old English stock. He left school early and was brought up from boyhood in the court of King David with Henry, the king’s son, and Waldef. In the course of time he became a monk, afterwards abbot of Rievaulx. His school learning was slight, but as a result of careful discipline in the exercise of his acute natural powers, he was cultured above many who had been thoroughly trained in secular learning. He drilled himself in the study of the Holy Scripture and left a lasting memorial behind him in writings distinguished by their lucid style, and wealth of edifying instruction, for he was wholly inspired by a spirit of wisdom and understanding. Moreover, he was a man of the highest integrity, of great practical wisdom, witty and eloquent, a pleasant companion, generous and discreet. And, with all these qualities he exceeded all his fellow prelates of the Church in his patience and tenderness. He was full of sympathy for the infirmities, both physical and moral, of others.

The preface for the feast, which draws on Aelred’s own writings, is worth pondering and praying. Above all, those who have any kind of leadership or managerial role should seek out his Oratio Pastoralis (Pastoral Prayer) and pray it often.

Truly it is right and just, our duty and our salvation,
always and everywhere to give you thanks,
Lord, holy Father, almighty and eternal God, through Christ our Lord.

Tenderly you drew Saint Aelred  to the school of your service
where, having tasted of the sweetness of your love,
he became the gentle father of many sons,
a merciful shepherd to the weak,
and a model of spiritual friendship.

Inflamed by the love of Christ,
he embraced the Cross
as the pattern of monastic conversion,
and so attained the repose of those who love you,
the true and eternal Sabbath of the blessed.

And so, on his feast day, we join with him to adore you,
and with all the company of Angels and Saints,
sing the ageless hymn of your praise: sanctus, sanctus, sanctus . . .

was the son of a noble family in Northumbria who served at the court of King Oswiu, until 653. He made a couple of pilgrimages to Rome and on the return journey from the second, he became a monk at Lerins off the south coast of France, taking the name Benedict. While visiting Rome for a third time he met Theodore who had just been appointed Archbishop of Canterbury and returned to England with him, becoming abbot of St Augustine’s, Canterbury.

He wanted to make his own foundation in Northumbria: in 674 King Egfrith gave him land to found a monastery at Wearmouth. He employed Frankish masons to build a Romanesque church, and he also imported various craftsmen including glass makers, who not only worked on the church, but also taught their crafts to local Northumbrians. Books were also imported and Biscop drew up a rule based on that of St Benedict, together with the customs of the many monasteries he had visited on his travels.

In 679 he made his fifth visit to Rome, and brought back to Wearmouth the arch cantor of St Peter’s Rome to teach the Roman chant to the community, and the abbot of St Martin’s to teach the Roman liturgy and uncial script. As well as books he also brought liturgical texts, relics and paintings to adorn the church. The monastery was put under the special protection of the Bishop of Rome.

In 682 King Egfrith provided some more land to make a foundation at Jarrow, to which Benet sent twenty-two monks with Ceolfrith as abbot. As he grew old he delegated the rule of Wearmouth to others and when he was approaching death he addressed the community telling them to elect an abbot for the worthiness of his life and not for his family connections, and he asked them to maintain his library. The community duly obeyed and elected Ceolfrith as their second abbot, and the library enabled St Bede to achieve his great work. The script and iconography he introduced at Wearmouth enabled England to produce work that was the equal of the best continental efforts. ‡