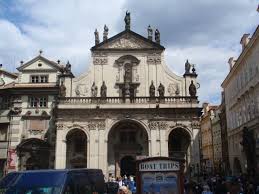 (AP) PRAGUE – Churches were seized, priests jailed or even executed and those allowed to lead religious services did so under the watchful eye of the secret police. More than 22 years after the fall of Communism, the Czech government agreed Wednesday to pay billions of dollars in compensation for property seized by the former totalitarian regime.

The deal at one point, however, threatened to topple the coalition government after a junior partner this week voiced anger at the thought of huge sums being paid to churches given the current economic gloom.

But in a country where indifference to religion is strong — a legacy of the Soviet plan to create one of the most atheist states in their orbit — the compensation plan — to be spread over 30 years — proved a win-win situation: The state no longer wanted to pay the priests’ salaries, and religious organizations — mostly Catholic and Protestant — expressed relief after previous failed attempts.

The Communist regime, which seized power in 1948 in what was then Czechoslovakia, confiscated all the property owned by churches and persecuted many priests. Churches were then allowed to function only under the state’s strict control and supervision and priests’ salaries paid by the state.

After the 1989 Velvet Revolution brought democracy to the region, some churches and monasteries were returned, but the churches have since sought to get back other assets such as farms, woodlands and buildings.

Wednesday’s ruling still needs the approval of Parliament, but the governing three-party coalition has a comfortable majority.

Under the plan, the country’s 17 churches, including Catholic and Protestant, would get 56 percent of their former property now held by the state — estimated at 75 billion koruna ($3.7 billion) — and 59 billion koruna ($2.9 billion) in financial compensation paid to them over the next 30 years. The state will also gradually stop covering their expenses over the next 17.

Culture Minister Alena Hanakova, whose ministry drafted the bill, called the decision “historic” and the Catholic Czech Bishops’ Conference welcomed the move, saying it hoped Parliament will follow suit. The Catholic Church will receive the biggest share of the restitution money.

In 2008, a similar bill was approved by the government but Parliament rejected it.

The government’s decision Wednesday came after its junior coalition party withdrew its objection to the plan.

Prime Minister Petr Necas had threatened to dismiss the Public Affairs party’s ministers if they blocked the proposal, which would have ended the three-party coalition that came to power after the 2010 election.

“It’s crucial that we’ve managed to agree on it,” Necas said.

Public Affairs chairman Radek John said his party only agreed after it received guarantees the government would not apply cuts and other austerity measures to raise funds for the compensation.

The party’s opposition reflected the overall atmosphere in the country, considered one of the most atheist in Europe.

According to a December 2011 public poll, 69 percent of Czechs were against the religious restitution and only 40 percent considered churches to be useful.

This entry was posted in Uncategorized and tagged Czech Government, Persecuted Church. Bookmark the permalink.