The Conversion of St. Paul

St. Paul, named Saul at his circumcision, a Jew of the tribe of Benjamin, was born at Tarsus, the capital of Cilicia. He was a Roman citizen. He was brought up as a strict Jew, and later became a violent persecutor of the Christians. While on his way to Damascus to make new arrests of Christians, he was suddenly converted by a miraculous apparition of Our Lord. From a fierce persecutor he became the great Apostle of the Gentiles. He made three missionary journeys which brought him to the great centers of Asia Minor and southern Europe, and made many converts. Fourteen of his Epistles are found in the New Testament. He was beheaded in Rome in 66, and his body is kept in the Basilica of St. Paul near the Ostian Way 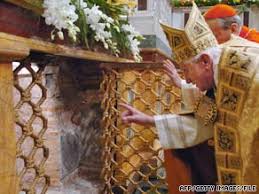 St. Paul was born at Tarsus, Cilicia, of Jewish parents who were descended from the tribe of Benjamin. He was a Roman citizen from birth. As he was “a young man” at the stoning of Stephen and “an old man” when writing to Philemon, about the year 63, he was probably born around the beginning of the Christian era.

To complete his schooling, St. Paul was sent to Jerusalem, where he sat at the feet of the learned Gamaliel and was educated in the strict observance of the ancestral Law. Here he also acquired a good knowledge of exegesis and was trained in the practice of disputation. As a convinced and zealous Pharisee, he returned to Tarsus before the public life of Christ opened in Palestine.

Some time after the death of Our Lord, St. Paul returned to Palestine. His profound conviction made his zeal develop to a religious fanaticism against the infant Church. He took part in the stoning of the first martyr, St. Stephen, and in the fierce persecution of the Christians that followed.

Entrusted with a formal mission from the high priest, he departed for Damascus to arrest the Christians there and bring them bound to Jerusalem. As he was nearing Damascus, about noon, a light from heaven suddenly blazed round him. Jesus with His glorified body appeared to him and addressed him, turning him away from his apparently successful career.

An immediate transformation was wrought in the soul of St. Paul. He was suddenly converted to the Christian Faith. He was baptized, changed his name from Saul to Paul, and began travelling and preaching the Faith. He was martyred as an Apostle in Rome around 65 AD.

— Excerpted from Lives of the Saints

This entry was posted in Devotion, Saints and tagged Feast of St. Paul. Bookmark the permalink.