Pope Benedict XVI was the principal celebrant at Mass on Sunday morning in St. Peter’s Basilica, with the twenty-two Cardinals he created the day before during the course of an Ordinary Public Consistory he had called for just that purpose. In his homily, the Holy Father stressed the centrality of the Petrine ministry – the special office of care and responsibility for the whole Church everywhere in the world, which the Bishop of Rome exercises in virtue of his being the Successor to St. Peter. Focusing on the Feast of the Chair of St. Peter, which was moved forward to Sunday from its usual calendar place on February 22nd, since this coming February 22nd is Ash Wednesday, the Holy Father explained:

Saint Peter’s chair, we could say, is the throne of truth which takes its origin from Christ’s commission after the confession at Caesarea Philippi. The magisterial chair also reminds us of the words spoken to Peter by the Lord during the Last Supper: “I have prayed for you that your faith may not fail; and when you have turned again, strengthen your brethren.” 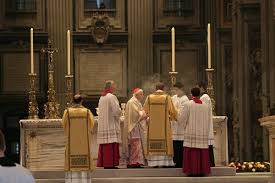 Describing the great chair present in the Basilica behind the High Altar, Pope Benedict noted that it is supported by the Fathers of the Church – symbolically represented in statues that bear the chair. “The two Eastern masters, Saint John Chrysostom and Saint Athanasius, together with the Latins, Saint Ambrose and Saint Augustine, represent the whole of the tradition, and hence the richness of expression of the true faith of the one Church,” said Pope Benedict. “This aspect of the altar teaches us that love rests upon faith. Love collapses if man no longer trusts in God and disobeys him. Everything in the Church rests upon faith: the sacraments, the liturgy, evangelization, charity. Likewise the law and the Church’s authority rest upon faith.”

“Dear brothers and sisters,” he said, “the gift of this love has been entrusted to us, to every Christian. It is a gift to be passed on to others, through the witness of our lives.”

“This,” he told the new Cardinals, “is your task in particular: to bear witness to the joy of Christ’s love.”

It was a theme to which the Holy Father returned in his Angelus address to the thousands of faithful gathered in St. Peter’s Square for the occasion. “Dear friends,” he said before the ancient prayer of Marian devotion, “we entrust the new Cardinals to the maternal protection of Mary Most Holy, asking that she always assist them in their service to the Church and sustain them in the trials,” they shall face.

The Holy Father asked that Mary, Mother of the Church, help him and his collaborators to work tirelessly for the unity of the People of God and to proclaim to all peoples the message of salvation, humbly and courageously serving the truth in love.

After the Angelus, Pope Benedict had greetings for the faithful in many languages, including English:

I welcome all the English-speaking visitors present for this Angelus prayer, especially those accompanying the new Cardinals. In today’s Gospel, Jesus grants healing and life in body and soul in response to faith. May we too believe and trust in Christ, and seek from him both forgiveness of sin and the power to live a new life of grace. Upon all of you I invoke God’s blessings of joy and peace!