Today is the Solemnity of Mary Mother of God, the World Day of Peace, and the first day of the calendar year in the West. The following reflection on Mary, Mother of God, is taken from an address by Pope Benedict to October’s Synod. 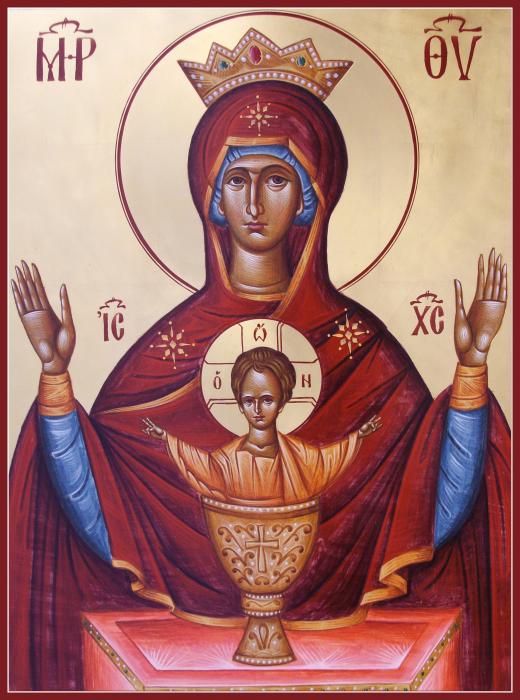 In reality, “Theotókos” is an audacious title. A woman is Mother of God. One might say: how is this possible? God is eternal, he is the Creator. We are creatures, we are in time: how could a human person be Mother of God, of the Eternal, given that we are all in time, we are all creatures? So one realizes that there was strong opposition, in part, against this expression. The Nestorians said: one may speak of “Christotókos,” yes, but of “Theotókos,” no: “Theós,” God, is beyond, above the events of history. But the Council decided this, and precisely in this way brought to light the adventure of God, the greatness of what he has done for us. God did not remain within himself: he came out from himself, he united himself so much, so radically with this man, Jesus, that this man Jesus is God, and what we say about him we can always say about God as well. He was not born only as a man who had something to do with God, but in him God was born on earth. God came out from himself. But we can also say the opposite: God has drawn us into himself, so that we are no longer outside of God, but we are inside, inside God himself.

Christ was not born as an individual among others. He was born to create a body for himself: he was born – as John says in chapter 12 of his Gospel – to draw all things to him and in him. He was born – as the letters to the Colossians and to the Ephesians say – to recapitulate all the world, he was born as the first-born of many brothers, he was born to reunite the cosmos in himself, such that he is the head of a great body. Where Christ is born, there begins the movement of recapitulation, the moment of the calling, of the construction of his body, of the holy Church. The Mother of “Theós,” the Mother of God, is Mother of the Church, because she is Mother of the one who came to reunite all in his risen body.

Saint Luke helps us to understand this in the parallelism between the first chapter of his Gospel and the first chapter of the Acts of the Apostles, which repeat the same mystery on two levels. In the first chapter of the Gospel, the Holy Spirit overshadows Mary, and so she gives birth and gives us the Son of God. In the first chapter of the Acts of the Apostles, Mary is at the center of the disciples of Jesus who are all praying together, imploring the cloud of the Holy Spirit. And so from the believing Church, with Mary at the center, is born the Church, the body of Christ. This twofold birth is the one  birth of the Christus totus, of the Christ who embraces the world and us all.
Birth in Bethlehem, birth in the cenacle. Birth of the Child Jesus, birth of the body of Christ, of the Church. They are two events, or one single event. But between the two really stand the cross and the resurrection. And only through the cross does the journey toward the totality of Christ take place, toward his risen body, toward the universalization of his being in the unity of the Church. And so, keeping in mind that it is only from the grain that falls to the ground that the great harvest comes, from the Lord pierced on the cross comes the universality of his disciples gathered into his body, put to death and risen.

Keeping in mind this connection between “Theotókos” and “Mater Ecclesiae,” our attention shifts to the last book of Sacred Scripture, Revelation, where, in chapter 12, this very same synthesis appears. The woman clothed with the sun, with twelve stars on her head and the moon under her feet, gives birth. And she gives birth with a cry of pain, she gives birth with great suffering. Here the Marian mystery is the mystery of Bethlehem extended to the cosmic mystery. Christ is always being born again through all the generations, and so he takes up, he gathers humanity into himself. And this cosmic birth is realized in the cry of the cross, in the suffering of the passion. And the blood of the martyrs belongs to this cry.

This downfall is not only the knowledge that these are not God. It is the process of the transformation of the world, which costs blood, costs the suffering of the witnesses to Christ. And, if we look closely, we see that this process is never finished. Even today, in this moment, in which Christ, the only Son of God, must be born for the world with the downfall of the gods, with suffering, the martyrdom of the witnesses.

We think of the great powers of today’s history, we think of the anonymous capitals that enslave man, that are no longer something belonging to man, but are an anonymous power that men serve, and by which men are tormented and even slaughtered. They are a destructive power that threatens the world. And then the power of the terrorist ideologies. Violence is done apparently in the name of God, but this is not God: these are false divinities that must be unmasked, that are not God. And then drugs, this power that, like a ravenous beast, stretches its hands over all parts of the earth and destroys: it is a divinity, but a false divinity, which must fall. Or even the way of life promoted by public opinion: today it’s done this way, marriage doesn’t matter anymore, chastity is no longer a virtue, and so on.

These ideologies that are so dominant that they impose themselves by force are divinities. And in the suffering of the saints, in the suffering of believers, of the Mother Church of which we are part, these divinities must fall, what is written in the letters to the Colossians and Ephesians must come true: the dominations and powers fall and become subjects of the one Lord Jesus Christ…

Let us entrust ourselves again to the Mother of God, to Mary, and pray: “You, the great believer, you who have opened earth to heaven, help us, open the doors today as well, so that the truth may be triumphant, the will of God, which is the true good, the true salvation of the world.” Amen.

1 Response to Mary, Mother of God