Biblical Reflection for the Third Sunday of Lent

Today’s first reading from Exodus (3:1-8a; 13-15) carried me back to my first visit to Mount Sinai and St. Catharine’s Monastery in 1990, during my years of study in Jerusalem. I remember well that awesome experience of standing on “holy ground” in Sinai, at the place where God gave humanity his Law, the Ten Commandments of the Covenant.

I also recall the moving words of Pope John Paul II spoken at St. Catherine’s Monastery in Sinai on Feb. 26, 2000, during his historic Jubilee Pilgrimage to the places of our salvation: “How many have come to this place before us! Here the People of God pitched their tents (cf. Exodus 19:2); here the prophet Elijah took refuge in a cave (cf. 1 Kings 19:9); here the body of the martyr Catherine found a final resting-place; here a host of pilgrims through the ages have scaled what Saint Gregory of Nyssa called ‘the mountain of desire’ (The Life of Moses, II, 232); here generations of monks have watched and prayed.

“We humbly follow in their footsteps, to ‘the holy ground’ where the God of Abraham, of Isaac and of Jacob commissioned Moses to set his people free (cf. Exodus 3:5-8).”

In today’s well-known passage from the book of Exodus Chapter 3, the image of “holy ground” is vivid. For centuries, spiritual writers have contemplated the deep significance of holy ground and holy places. The whole area of the Sinai, with its rugged, natural beauty and the ancient monastery still standing at the foot of God’s holy mountain, are silent witnesses to God’s entrance into human history.

In today’s first reading, Moses is simply “minding his business” keeping the flock of his father-in-law Jethro, the priest of Midian, when he comes to Horeb, the mountain of God (Exodus 3:1ff). Horeb has this special designation probably because of the divine apparitions that took place there, as well as the place where the Israelites sojourned after the departure from Egypt. 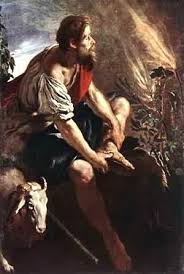 The angel of the LORD appeared to Moses in a flame of fire out of a bush; he looked, and the bush was blazing yet it was not consumed. Then Moses said, “I must turn aside and look at this great sight, and see why the bush is not burned up.” When the LORD saw that he had turned aside to see, he called to him out of the bush, “Moses, Moses!” Moses, fearful, shocked and amazed, became aware that someone who knows him must be here, someone who is truly interested in him. And Moses said, “Here I am.” Then the Lord said, “Come no closer! Remove the sandals from your feet, for the place on which you are standing is holy ground” (Exodus 3:2-5).

Moses hears his name called out twice: “Moses, Moses!” In the Bible it is rare for a person to be called twice. In the book of Genesis (22:1), Abraham is summoned to sacrifice his son. “Abraham, Abraham!” It is a major turning point in his life. His own sincerity was put to the test. Another instance of a double name calling is in 1 Samuel 3:10 “Samuel! Samuel!” And Samuel said, “Speak, for your servant is listening.” The confusing period of the Judges is ending and the time of the kings, which marks a new nearness of God to his people, is beginning.

Moses tried to consider the phenomenon of the burning bush as a part of his view of God, of history, and of God’s presence in history. But the Lord’s strong words to Moses from the bush are a warning, as if Moses were being told: “Moses, you are not going to come to me by enclosing me into your personal scheme of things. You are not the one to integrate me into your personal plans. Instead, I want to fit you into my master plan!” No one of us waltzes into availability to the mystery of God. It is the Lord God who seeks Moses […] where he happens to be. The Lord does the same with each of us.

We must never forget that while God revealed himself to Moses in a particular place and through a particular fashion, this does not limit God, to those places and ways. Our human tendency to limit this God to certain times, places and peoples will be lessened to the degree that we understand the absolute sovereignty of God.

The presence of God and the power of Jesus cannot be limited to mere places. Let us recognize God’s great ability to break through our distances, structures, borders and rules in order to speak to us wherever we are the words once spoken to Moses: “Come no closer! Remove the sandals from your feet, for the place on which you are standing is holy ground.”

The Old Testament typology of desert, rock and water is very evident in today’s second reading from St. Paul’s first letter to the Corinthians (10:1-6, 10-12). St. Paul writes: “All ate the same spiritual food, and all drank the same spiritual drink, for they drank from a spiritual rock that followed them, and the rock was the Christ. Yet God was not pleased with most of them, for they were struck down in the desert.”

Paul refers to a spiritual rock that followed the people. The Torah speaks only about a rock from which water issued, but rabbinic legend amplified this into a spring that followed the Israelites throughout their migration. Paul uses this legend as a literary type: He makes the rock itself accompany the Israelites, and he gives it a spiritual sense. The rock was Christ.

In the Old Testament, the Lord God is the Rock of his people (Moses’ song to the Lord, the Rock in Deut 32). Paul now applies this image to the Christ, the source of the living water, the true Rock that accompanied Israel, guiding their experiences in the desert.

Destiny of all God’s people

Let us ponder words of Pope John Paul II spoken ten years ago at St. Catherine’s Monastery in Sinai during his Jubilee Pilgrimage in February 2000:

“Here on Mount Sinai, the truth of ‘who God is’ became the foundation and guarantee of the Covenant. Moses enters ‘the luminous darkness’ (The Life of Moses, II, 164), and there he is given the Law ‘written with the finger of God’ (Exodus 31:18). But what is this Law? It is the Law of life and freedom! At the Red Sea, the people had experienced a great liberation. They had seen the power and fidelity of God; they had discovered that he is the God who does indeed set his people free as he had promised. But now on the heights of Sinai, this same God seals his love by making the Covenant that he will never renounce. If the people obey his Law, they will know freedom forever. The Exodus and the Covenant are not just events of the past; they are forever the destiny of all God’s people!

“The Ten Commandments are not an arbitrary imposition of a tyrannical Lord. They were written in stone; but before that, they were written on the human heart as the universal moral law, valid in every time and place. Today as always, the Ten Words of the Law provide the only true basis for the lives of individuals, societies and nations. Today as always, they are the only future of the human family. They save man from the destructive force of egoism, hatred and falsehood. They point out all the false gods that draw him into slavery: the love of self to the exclusion of God, the greed for power and pleasure that overturns the order of justice and degrades our human dignity and that of our neighbor. If we turn from these false idols and follow the God who sets his people free and remains always with them, then we shall emerge like Moses, after forty days on the mountain, ‘shining with glory’ (Saint Gregory of Nyssa, The Life of Moses, II, 230), ablaze with the light of God!

“To keep the Commandments is be faithful to God, but it is also to be faithful to ourselves, to our true nature and our deepest aspirations. The wind which still today blows from Sinai reminds us that God wants to be honored in and through the growth of his creatures: ‘Gloria Dei, homo vivens.’ In this sense, that wind carries an insistent invitation to dialogue between the followers of the great monotheistic religions in their service of the human family. It suggests that in God we can find the point of our encounter: In God the All Powerful and All Merciful, Creator of the universe and Lord of history, who at the end of our earthly existence will judge us with perfect justice.”

On this Third Sunday of Lent, the lessons of Sinai are clear for us: We too shall be truly free if we learn to obey as Jesus did. The encounter of God and Moses on Mount Horeb in the Sinai enshrines at the heart of our religion the mystery of the liberating obedience, which finds its fulfillment in the perfect obedience of Christ, by his birth in Bethlehem and his crucifixion in Jerusalem.

This entry was posted in Uncategorized and tagged Biblical Reflections, Fr. Thomas Rosica. Bookmark the permalink.

2 Responses to Biblical Reflection for the Third Sunday of Lent