The Floodgates of Divine Mercy 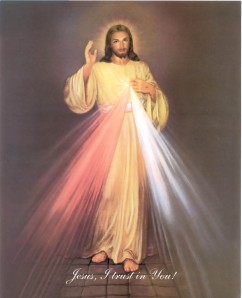 Beginning on Good Friday and culminating on Divine Mercy Sunday, the second Sunday of the Octave of Easter, the Church turns her attention to the divine mystery of merciful love.

This devotion in different forms is a special gift from the saints of our era.  St. Therese of Lisieux made an offering of herself to this mystery at the end of the 19th Century.   Blessed Elisabeth of the Trinity understood her vocation to praise the glory of its immensity at the beginning of the 20th Century.   St. Faustina Kowalska was made the apostle of this devotion at the outbreak of World War II, faithfully transmitting the special prayers she received in extraordinary ways in her contemplation of the Risen Lord, especially the Chaplet of Divine Mercy.  Blessed John Paul II was instrumental in restoring this devotion just before he was elected Pope.  He would later beatify and canonized St. Faustina, and declare Divine Mercy Sunday as an observance for the Universal Church.  John Paul II wrote an encyclical about this defining reality of the Christian life.  He also beatified St. Teresa of Calcutta, a living icon of Divine Mercy in action.   He died on the Eve of Divine Mercy Sunday and later was beatified by Pope Benedict on this same feast.

One of the beautiful truths that Blessed John Paul II illustrates in his Encyclical on Divine Mercy is that logic of mercy only makes sense from the inside, from those who are implicated in it.  He using the Parable of the Prodigal Son (Luke 15: 11ff),  he observes that when we remain on the outside of the relationship between the father and the son of the parable, what the father does appears foolish.   This indeed is how the older son looks at it.   It is only when we think about the father’s words and actions from within the logic of his relationship with his sons that the depths of his love is disclosed to us.  In both cases, the figure of the father suffers the misery of his sons.  In the first instance, awareness of the living death into which his younger son had fallen pained his own heart.  In the second instance, his heart is pained that the older son, after all they had been through together, still did not understand how much he had been loved, how much was his.   In both instances, the father’s heart is pierced by the plight of his sons.

Mercy, as a word, is related to the Latin idea of “miserum cor.”   It is a movement of love where one’s heart is pierced over the plight of another.   This pain of heart stirs a deep love that must be shown forth in action.  In the case of the father, he obviously spends his life searching for his sons to bring them home.   The celebration of this season of mercy which begins in the very heart of the Triduum and extends through the Easter Octave is a time to allow our hearts to be pierced by one another’s plights.  This is especially the case for those who have strayed far from the father’s house and who have not yet come to their senses.

If someone wondered about how to access divine mercy for themselves, the only place to find it is the Cross of Christ.  The Paschal Mystery is the threshold to mercy – its unbounded font, its supreme summit.   This may be why the Novena to Divine Mercy begins on Good Friday.   Contemplating the Agony of the Lord is a meaningless exercise outside the logic of mercy.  If we do not implicate ourselves in the drama of God the Father’s love, the death of the Suffering Servant can only be seen as an enigma of injustice.   But with the eyes of faith, one discerns in the outstretched arms of our Crucified Master how the overwhelming misery of humanity (on both the most personal and most social levels) finds its limits in the limitlessness of Divine Mercy.

In the light cast by the Passion of the Lord, mercy demands that we be ready to forgive every debt and trespass, and that we be solicitous to be reconciled with those the Lord has entrusted to us.   It is time to abandon our lukewarm indifference to God and to our neighbor, and to allow our hearts to be pierced as is the heart of God for us.  It is time to make no provision for our fallen nature or its appetites – but in each and every moment to choose that mercy that gushes forth from our Risen Lord.  It is a time to go to confession and to take a little more time to examine our consciences in regards to the way we treat the poor, the needy and the vulnerable in our lives.    It is a time to let go of grudges, bitter judgment and resentment – and if our struggle to let go of these things that bind our hearts is fierce, we must beg for the courage and strength to be able to do so in the face of our weakness.

Why would our merciful Father not hear such heart-felt prayer?  But once you taste mercy, it is never enough to keep it to yourself.  Sobered and humbled before its vast horizons, we cannot help but pray for our brothers and sisters who struggle under the weight of intense suffering and death.   Once we feel the heartbeat of mercy in the Father’s embrace, we feel compelled to seek out those who, like us, are coming home from a long way off.   Our hearts have not yet been pierced by merciful love if we do not feel with urgency the need to run and welcome those who feel they are no longer worthy to be called the sons and daughters of the Father — He who yearns for our homecoming.   This is the time and this the hour in which we must make every effort for their sake.  How can we not join this jubilation that resounds even now in the Father’s House, that infinite excess of love in the bosom of the Trinity?

By Anthony Lillies at rcspiritualdirection

2 Responses to The Floodgates of Divine Mercy