Biblical Reflection for the Third Sunday of Easter

Peter’s Rehabilitation and Ours

This “sea” is really a fresh-water lake in the shape of a small harp that is 12-13 miles in length and 7-8 miles wide. Fish and fishing played an important role in the New Testament and in the early Church. Fishing eventually became an important symbol of the church’s missionary task, since Jesus had invited his earliest disciples to “fish for people” (Matthew 4:19; Mark 1:17; Luke 5:10). There is something “fishy” about the origins of Christianity!

The “breakfast symphony” in two movements 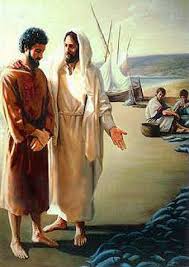 Chapter 21 is an epilogue to the Fourth Gospel, a post-resurrectional “breakfast symphony” in two movements. The first movement (vv.1-14) describes the appearance of the Risen Jesus to his disciples “by the Sea of Tiberias.” It is concerned with fish and fishing. When Peter decides to go fishing, there is a certain feeling of resignation and bleakness about it, alluding to the depression and discouragement he and the other disciples must have experienced after Jesus’ death. Peter is simply taking up his old profession.”

Jesus’ appearance is shrouded in mystery, in the familiar atmosphere of “not knowing who he was” that we see so often from the Gospel writers. The disciples have been out at sea and “that night they catch nothing” (v 3), a graphic portrayal of barrenness. They have done what they thought was the right thing but experienced failure. This prepares them to learn one of the central lessons of discipleship — apart from Jesus they can do nothing (15:5). The turning point comes early in the morning, perhaps symbolizing the dawning of spiritual light. Jesus is described again as simply standing there, without a description of his arrival on the spot (v 4; 20:14, 19, 26).

Jesus takes the initiative and calls out to the disciples: “Friends, haven’t you any fish?” (v. 5).  The disciples admit they have failed at fishing and Jesus tells them, “Throw your net on the right side of the boat and you will find some” (v. 6). They could have easily understood this remark as the idle suggestion of a bystander. But he does not say, “Try over there and you might find some!” He doesn’t offer a suggestion; he gives a promise that in fact they will find fish where he directs them to cast.

When the disciples come ashore, they notice is a charcoal fire with bread and fish already prepared (v. 9). There is no indication of where Jesus got the bread and fish; the appearance of the food is as mysterious as his own. The only other charcoal fire mentioned in the Gospels is the provocative scene from Luke’s Passion Narrative when Peter disowns Jesus (Luke 22:55). That scene presents the fire of denial and betrayal. John’s Gospel offers the fire of repentance and recommitment.

The meal referred to may have had Eucharistic significance for early Christians since John 21:13 recalls John 6:11 which uses the vocabulary of Jesus’ action at the Last Supper. Many people have asked and continue to ask about the number of fish — 153. Long ago, St. Jerome had claimed that Greek zoologists catalogued 153 species of fish in the lake! The number is meant to have special symbolism in relation to the apostles’ universal mission.

The next scene is one of great awe, with none of the disciples daring to ask Jesus, “Who are you?” (v. 12). There was something different about him, yet they were able to recognize him. Now it is the Lord Jesus who is the focus of the story. After breakfast Jesus speaks to Peter. Throughout this story Peter has been referred to as Simon Peter (vv. 2-3, 7b, 11) or simply as Peter (v. 7a), the name Jesus had given him (1:42; cf. Mark 3:16; Luke 6:14). Now Jesus calls him by his former name, Simon son of John (v. 15), as if he were no longer (or not yet!) a disciple.

The second movement of the “symphony” (vv. 15-23) presents a poignant dialogue between Jesus and Peter. It is one of the most personal and moving commissionings in the Bible, concerned with sheep and shepherding. Peter certainly knew failure along the road of discipleship. The disciple who was called “rock” wept with regret in Luke 22:62 after denying his Lord. Peter is given an opportunity to repent and recommit himself to Jesus.

Jesus questions Peter and then gives a command, and he does so three times. His question is the ultimate question in life: do you truly love me more than these? (v. 15). Does it refer to the net, the boats, the material things of their fishing profession? By “these” Jesus probably means “these other disciples.” According to the other Gospels, Peter had boasted that though all the others fall away, he would not (Matthew 26:33; Mark 14:29; Luke 22:33; John 13:37). John does not record this boast, but Peter’s actions in swimming to shore and hauling up the net by himself reveal the same attitude. Jesus’ question, therefore, goes even deeper than the issue of false attachments. He gets at the root of all sin, namely, pride.

Behind this translation there are two verbs for love, truly love (agapao) and love (phileo). There is a pattern, with Jesus asking Peter twice whether he loves him (agapao) and each time Peter responding that, yes, he does love him (phileo). Then the third time Jesus switches to using Peter’s word. Peter’s three-fold denial of Jesus during the trial and crucifixion is now canceled out by the three-fold declaration of love.

In response to the searing, painful third question, Peter says, Lord, you know all things; you know that I love you (v. 17). After each profession of love Jesus gives a similar command, using different words. First he is to feed (boske) lambs (arnia, v. 15); then he is to shepherd (poimaine) sheep (probata, v. 16). The third command includes a word from both of the previous commands (v. 17, boske/probata), thereby tying the three commands together.

Why does Jesus ask Peter, on whom he is going to confer the pastoral office as chief shepherd, these questions and not others? Wouldn’t there be other questions which we can imagine his having asked him concerning his suitability for ministry? For example, “Simon, son of John, are you aware of the great responsibilities that you are undertaking?” “Do you realize your weakness and track record?” “Simon, son of John, do you understand?” “Are you aware of how many people about you are in need of help?” “Are you able to respond to all the demands made of you?”

In our day where proficiency and efficiency seem to be at the top of the list of “professional” ministerial aptitudes, we might translate those questions into the language of age and agility, academic qualifications, psychological balance, previous leadership experience, financial management, success in public relations, eloquence, diplomacy, etc. Such questions may be important to varying degrees for effective ministry today. But Jesus sums them all up in a single, basic question, repeated with two different verbs in Greek to indicate the different nuances of love and friendship which are being referred to: “Simon, son of John, do you love me? Are you really my friend?” This question goes directly to a person’s heart.

The key qualification for the Petrine ministry, and for all ministry in the name of Jesus Christ, is a love for the Lord that is characterized by humility, dependence and obedience. Peter already had a devotion to Jesus, but he was still full of self-will and was thrusting himself to the front. Such a proud attitude of heart would spell disaster for the community, as had already been evident in Israel’s history right up to the opponents who had just had Jesus crucified and has been just as evident in the history of the church to our own day!

Peter himself learned his lesson, as is clear from his first letter. When he addresses the elders of the communities he does so as a “fellow elder” and encourages them to “be shepherds of God’s flock that is under your care, serving as overseers … not lording it over those entrusted to you, but being examples to the flock. And when the Chief Shepherd appears, you will receive the crown of glory that will never fade away” (I Pet 5:1-4). This is authority exercised in humility and conscious of the Chief Shepherd. Such are marks of an authentic shepherd.

Ultimate responsibility for the flock

Once Peter’s love has matured, he allows the Risen Lord to look into his own heart: “Lord, you know everything; you know that I love you” (John 21:17). Only when Peter allowed himself to be forgiven by Jesus, would he receive his new responsibility for the flock. For Peter, insight into Jesus’ true identity and his compassion brought new demands and responsibilities. Peter is truly a model for us, as he must always remember his own failures as he undertakes leadership within the church. Rather than incapacitating him, his remembrance enables him to be a merciful and compassionate leader.

How do we deal with memories of our own failures as we reach out to others? Into what kind of intimacy is God calling us at this moment in our life? With whom is God calling us to be intimate? What do we understand to be our responsibilities following upon our own declaration of faith in Jesus? Peter learned his lesson well; he would imitate Jesus the rest of his life even to the point of giving that life as a martyr, dying upside down on a cross on the Vatican hill. Are we prepared to go to that extreme for our faith in Jesus? Do we love Jesus more than “these?”

3 Responses to Biblical Reflection for the Third Sunday of Easter