Where next for Same-sex ‘Marriage’?

The subject, same-sex ‘marriage’, is one we have discussed many times before on CP&S, but seeing the current problems, outrage and divisions it has caused among our neighbours in France, the coming bill to legalise this abomination in England and Wales, is starting to make us all uneasy. The media (mostly in total agreement with this ludicrous bill) in continually calling the French opponents to same-sex marriage “extreme right-wing traditionalists”, or even “fascists”, does not help matters. In making the biased assumption that these opponents are no more than groups of twisted fanatics, not to be taken seriously, rather than normal citizens (most of whom are Catholic, but by no means all) who uphold the one and only possible meaning of ‘marriage’, the general public are receiving a distorted picture of the French resistance to the bill. Same-sex ‘marriage’ is wrong and anti-natural, and one could even say non-existent, whatever it is being called by the politicians!

It remains to be seen what will happen here.

This talk by Richard Kornicki was written and given to us as one of our ‘meditations’ as we walked on the recent Chartres pilgrimage: https://catholicismpure.wordpress.com/2013/05/26/2013-pentecost-pilgrimage-from-notre-dame-de-paris-to-notre-dame-de-chartres/ 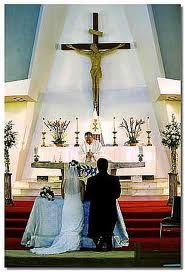 Marriage: one man and one woman

For Same-Sex Marriage to become law, like any other Act of Parliament, it will require Royal Assent. As it happens, the Government’s plans have already been given Royal Assent – in one form, and that was some years ago. The Monarch in question was the Red Queen in “Alice Through the Looking Glass”. In one famous exchange she declares: “Words mean what I want them to mean”. What Lewis Carroll regarded as absurdity, this Government has, with same-sex marriage, now adopted as a legislative principle. Marriage has always had a perfectly clear meaning; but the Government now wants the word to mean something inherently self-contradictory. You can no more have ‘same-sex marriage’ than you can have mountain-climbing fish or pigs that fly.

Judging by the media reports you would have thought it was already all over. If you listened to the commentators, the vote in favour of Same-Sex Marriage at Second Reading in the House of Commons was the end of the story. Parliament had spoken, all that remained was the dotting of i’s and crossing of t’s.

Fortunately, our Constitution is little less despotic than that. There is still the consideration of the Bill by the House of Lords. And among their Lordships are some blessedly independent minded Peers of all parties.

If you are beginning to think that this could go on forever as an absurd form of Parliamentary ping-pong, you are absolutely right. But the convention is that the House of Lords will ultimately always give way on a Finance Bill or a manifesto commitment.

And that is where this all gets rather interesting, because three days before the last election Cameron said that he had no plans to introduce same-sex marriage. It was never in his manifesto. There was no Green Paper for discussion, and no White Paper with detailed proposals. And the Bill was not even mentioned in the recent Queen’s Speech setting out the Government’s programme for the coming session. As one MP commented, this has become the Bill that dare not speak its name.

In these circumstances, there is no reason why the Lords should necessarily give way in the end. The Government would then have to use the Parliament Act to force it through. Whether they would dare, given the extraordinary lack of democratic underpinning for the policy, is anyone’s guess. It would be a breathtaking constitutional outrage and many might not support it for that reason alone.

And the Government now knows the price of its policy. In the local elections, same-sex marriage was clearly identified as one of the reasons a number of voters turned to UKIP. The Government has since analysed all the reasons why people voted for UKIP…. Except for this one. It is the elephant in the Cabinet Room.

But the only thing that ultimately drives politicians is votes. Without votes, you cannot get elected, without votes you cannot form a majority Government, without votes you do not have the power to fulfil any of your ambitions. Given the present state of the economy, of employment, of the NHS, of the armed forces; it would be a very rash Prime Minister who thought he could risk losing any votes. I think Sir Humphrey of fond memory would describe it not as ‘brave’ but as ‘courageous’ – if I can translate, brave means you lose votes, courageous means you lose elections.

So it is all to play for. But what will it mean if – God forbid – it does go through?

We have been told there is no need for the Churches to worry, because the Bill is bursting with cast-iron guarantees and a quadruple lock to protect freedom of religion.

No matter how many locks the Bill is shackled with, the European Court of Human Rights can flick them all off with the stroke of a pen. And the Government knows it.

In any event the policy is changing by the day. Originally we were solemnly assured that the policy would not allow for same-sex marriage in Churches, but then the Prime Minister told us that now it would be permitted.

The supporters of the Bill boast of it as providing ‘equal marriage’. But the goal posts have moved again and we now learn that there will be no requirement for same-sex couples to consummate their marriage; that adultery will not be a ground for divorce for same-sex couples (unless with a person of a different sex); and even the table of kindred and affinity will not apply. That is not equal marriage, whatever else it may be. But there is little point expecting logic or common sense to have any application to this Bill. We are in Alice in Wonderland territory.

If the Government had approached this policy with any serious thought, it would have begun by being clear about what marriage is. But insofar as the Government has bothered to set out any thoughts at all, it is a sadly impoverished understanding, unable to see that marriage constitutes anything beyond an inward looking arrangement for the emotional and practical convenience of any two people. But what marriage has always meant is very much more than that. It is inherently procreative, capable of building the family and extending itself. It produces the unit of society which, as all the evidence shows, provides the best foundation on which the next generation can be created and brought up as functioning members of society. That is why society has always given a particular legal status to marriage distinct from all other relationships: it is because it provides an essential benefit to society itself.

At present, the limitation of marriage to heterosexual couples means that a whole range of issues where same-sex equality issues might arise are simply not justifiable. However, the moment the definition of marriage is changed to accommodate same-sex couples, every one of them will suddenly become open to challenge in the courts. And recent experience suggests we will not have to wait long before the lawyers are briefed. Let me take just a few examples.

State schools, including faith schools, are required to teach the national curriculum. Once the state has redefined marriage, teachers will be obliged to teach all children that marriage between a same-sex couple is identical to marriage between a man and a woman. How long will it be before a teacher is disciplined or dismissed for being unable to teach something which is against his conscience or against the religious ethos of the school in which he teaches? We are told by the Government, that we will be able to state the Catholic view of marriage in a Catholic school – how very kind and generous of them. But we will also be obliged to teach the state’s very different understanding of marriage. Already Stonewall has prepared the cheerily illustrated little story-books for five year olds, telling cosy stories about having two Daddies. Woe betide the child who is upset by this. Woe betide the parent who objects. Woe betide the teacher who refuses to use them.

Or to take another example, we know how great is the need for foster and adoptive parents. They are rightly subject to close scrutiny by Social Services before acceptance. But if a potential foster couple believe that marriage can only be between a man and a woman, what will the reaction be? Every local authority department is bound by the public sector equality duty, to say nothing of its own diversity policies. It could not regard a belief in the unique status of marriage between a man and woman as being compliant with its policies and duties. Having disposed of the Catholic adoption agencies, this Government might well succeed in disposing of Catholic foster and adoptive parents.

And when a Catholic priest marries a couple, he does so in law as well as religion because he is legally authorised to conduct marriages in the absence of a registrar. But how long will it be before someone challenges the right of a priest to be authorised to conduct marriages if he is not prepared to conduct everything that the State would regard as a marriage? Whatever safeguards the Government may put in the Bill, they are all capable of being European Court of Human Rights – which, as we have seen time and again, allows only very limited discretion where homosexual rights are concerned. Of course same-sex marriage in a Church will only be where the religious body opts in to the arrangement… but if they don’t opt in, their right to conduct any marriage may well be called into question. We may find ourselves doing as they do here in France, going to a civil registrar to establish a marriage in law, and then to a Church for a sacramental marriage.

These are all practical questions that have already been put to the Government in response to its consultation process. We are still waiting for answers.

As we marched out of Paris we sang “Faith of Our Fathers”. We sang how sweet our fate would be, if we could suffer for Christ as our martyrs did.

We do not face anything so dramatic, but we certainly will face a direct confrontation between our beliefs and the law of the land. For some of us, if employed in the public sector, we may be required to assent to diversity policies which would be against our conscience. The security of jobs, or our hopes of promotion, may well come into issue. Whatever the situation is, it will be far from sweet. Taking a stand will be lonely, embarrassing, and difficult. It may be profoundly uncomfortable. Others around us may compromise their beliefs for practical reasons. Many of our friends and family will think we are mad not to do so. We will gain nothing but abuse; who knows how much we may face losing.

This is the reality that we may well face. So we had better prepare ourselves now. We need to know what we will say and why, before the Human Resources department hauls us in to explain ourselves.

Pray God that this awful Bill does not become law. But if it does, pray God that we may find the courage to continue to proclaim the truth.

21 Responses to Where next for Same-sex ‘Marriage’?