The powerful innovations of Francis’ pontificate

From Andrea Tornelli at Vatican Insider: 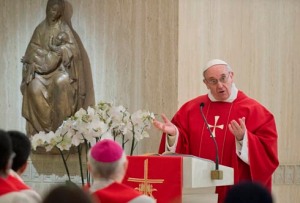 Francis’ alarm clock goes off at 4:45 every morning in room 201 in St. Martha’s House, when everything is still pitch black. Such an early start to the day means Francis has to have a siesta after lunch. Juan Perón called this time of rest an “almost liturgical must” which made it possible for him to fit “two mornings” into his day.

The first few hours of Francis’ day are dedicated to prayer and meditation on the Readings which the Pope comments on, in the brief homilies he gives in his morning masses in the chapel of the place he likes to call the “boarding school”, commonly known as St. Martha’s House: a simple and modern building decorated with light-coloured marble and stained glass. The Bishop of Rome sits in the pews at the back of the chapel to pray.

These spontaneous but not completely improvised morning preachings are one of the most important changes of the new pontificate. And this is where the third leg of our journey begins. The Pope is assisted by cardinals, bishops or visiting priests and the masses are attended mostly by Vatican staff – from IOR staff to rubbish collectors – and their families. Francis greets all of them one by one and then has breakfast in the St. Martha’s House “common room”. For Francis, being with people and hugging them one by one is in no way a chore or a waste of time: in Argentina he would spend whole nights listening to confessions without wearing his cardinal’s insignia, so anonymously, when big pilgrimages to Our Lady of Luján would take place.

The man who deals with requests to participate in the Pope’s morning masses and sends out invitations is a priest from the northern Italian city of Bergamo, Fr. Tino Scotti. The Pope/parish priest breaks the Gospel down for and with the faithful who attend the mass, in such a way that Vatican Radio is able to provide a summary of what Francis said, just two hours later. This has helped make these morning celebrations popular across the world. Bergoglio is a big admirer of Argentinean writer Jorge Luis Borges and once invited him to the high school where he was teaching, so his pupils could meet him. Every morning Francis comes up with new and effective illustrations to his messages, such as the “babysitter” church, the concept of “God spray”, confession not being like a “dry cleaner’s”, “sitting room Christians”, “museum-piece Christians” and “starch-pressed Christians”. Then there are his references to “prayers of courtesy”, the “balm of memory”, “adolescent progressivism” and “pastoral customs” which instead of fostering people’s faith, complicate it.

But the most striking thing about Francis is the simplicity of his words. Particularly those about tenderness and forgiveness: “The message of Jesus is mercy. For me, I say this humbly, it is the Lord’s most powerful message.” This message has encouraged people across the world to return to the Church and to confession after years of estrangement.

“The Pope preaches like he used to do in Buenos Aires and no one in the history of the Church has broken down the Gospel as he does. We have still not realised the theological significance of this. People are aware that these are not just abstract reflections,” the founder of the Bose community, Enzo Bianchi told Italian newspaper La Stampa.

Francis has quoted his grandmother Rosa Margherita Vassallo in many of his homilies, even the big ones in St. Peter’s Square. She used to explain little Jorge the importance of Jesus’ resurrection and not being too attached to money because “burial shrouds don’t have pockets”. And when her Jesuit grandson was about to be ordained, she said to him: “Celebrate mass, every mass, as if it were your first and last.” Francis’ grandmother testified the faith of the simple and ordinary people, which is something that links the Pope to John Paul I. The elderly archpriest of the Italian town of Canale d’Agordo would tell Albino Luciani who was a seminarian at the time: “Remember when you preach, that even the little old lady sat at the back of the church who didn’t go to school must be able to understand you.”

During his discussions with the Apostolic Nuncios, the Pope’s ambassadors across the world, who have been entrusted with the task of selecting candidates for the episcopacy, Francis urged them “to choose pastors who are close to their people, fathers and brothers, who are meek, patient and merciful,” who “love interior poverty” and live that externally with a simple lifestyle. They should not have “the mentality of a prince” and should steer clear of ecclesiastical “careerism”. He warned against “triumphalism” and should not place too much trust in wealthy bodies within the Church. This shows a strong continuity with what his predecessor Benedict XVI said and wrote.

Historian Andrea Riccardi said “it seems to me that by putting together the old and the new, he has created a language made up of gestures that give meaning to the great words of faith. This is clear for everyone to see when you look at how the people relate to Francis. He has only been in office for one hundred days but his message has gone far…” Now bishops need to get in tune with this approach which is purely evangelical and not so clerical.

“Something similar happened with John XXIII,” Riccardi went on to say. “Getting in tune is not always easy. The Church is not a radio with a channel selection button. It is a process that encounters great enthusiasm but also resistance.”

“Francis represents a powerful provocation for everyone. Providence has given us this wake up call. Each one of us is trying to follow the Pope in our own personal way. It’ll take some time…,” said Cardinal Angelo Scola. Meanwhile, the bishops of the northern Italian region of Lombardy have met and announced that they feel the responsibility of taking on the challenge of Francis’ new style and language. Since his election, Francis has often said : “I am ok, I have not lost my inner peace, I have not lost any sleep over a surprising event like the one which happened to me. And I consider this a gift from God.”

This entry was posted in Pope Francis I and tagged Pope Francis, Vatican Insider. Bookmark the permalink.

23 Responses to The powerful innovations of Francis’ pontificate