What Happened at Medjugorje? 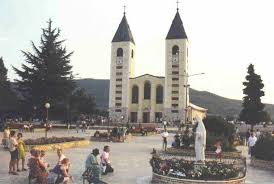 In 1981, a year after the death of ex-Yugoslavia’s communist dictator, Josip Broz Tito, events in Medjugorje, a small town in Bosnia-Hercegovina, began to stir the Christian world. Six Croatian Catholic children-four girls and two boys, then aged from ten to sixteen-claimed to have experienced visions of the Virgin Mary.

Even now, after twenty-eight years, three of the Medjugorje seers still report nightly visitations, usually around 6:40 local time, according to their official website. One of them, Ivan Dragicevic, who was sixteen years old when the apparitions commenced, holds prayer sessions on Mondays and Fridays, at 10:00, with additional communications from the Virgin. When the visionaries travel, they say, the Virgin increases the number of her messages to accommodate their itineraries.

As a result, Medjugorje is said to have drawn some 30 million pilgrims. But the visions were always controversial, especially within the Catholic Church. Bishop Pavao Žanic of Mostar-the nearest major city-who officiated in 1981, refused to support the authenticity of the children’s revelations. Bishop Žanic died in 2000 and was succeeded by Bishop Ratko Peric in 1993, who also repudiated Medjugorje. Rumor circulated in Bosnia over the past year that Benedict XVI shared their incredulity.

And this summer, at the end of July 2009, Benedict acted on his doubts. He has removed from the clergy one of two local priests most active in supporting the visions, Tomislav Vlašic, and threatened him with excommunication. (The suspension of the other, Jozo Zovko, from pastoral duties was confirmed in 2004.) Vlašic is also prohibited from residing in Franciscan facilities. The story has received little coverage in the United States, but has excited widespread comment in Ireland, from where millions of people had gone to Medjugorje, and Britain, which also contributed a significant contingent.

Simon Caldwell of the Catholic News Service recently wrote that Vlašic was moved last year to a Franciscan monastery in the Italian city of L’Aquila, “after he refused to cooperate in a Vatican investigation of his activities for suspected heresy and schism. He also was being investigated for ‘the diffusion of dubious doctrine, manipulation of consciences, suspected mysticism, disobedience towards legitimately issued orders and charges contra sextum (against the Sixth Commandment not to commit adultery).”

These harsh phrases appeared over the signature of Cardinal Levada, prefect of the Congregation for the Doctrine of the Faith. But Vlašic had already moved from Bosnia to the Italian city of Parma in the mid-1980s. And Franciscan minister general Fr. José Rodríguez Carballo has said that Vlašic requested his own laicization.

So what happened at Medjugorje? The visionaries, now approaching middle age, claim they were visited by the Virgin on tens of thousands of occasions. When Bishop Žanic was reluctant to support them, the children’s proponents accused him of submitting to Communist government pressure. Still, even after Croatia became independent in 1991, the Catholic hierarchy rejected the supernatural character of the incidents at Medjugorje.

While it is difficult and tragic to cast doubt on a religious occurrence that brings comfort to ordinary people, the Croatian and Bosnian Catholic bishops were aware that Medjugorje had questionable aspects in its local, political, and secular background.

Members of the Franciscan Province of the Assumption of the Blessed Virgin Mary, located in Hercegovina, took up the children’s cause. What had once been an obscure hamlet “between hills” (the meaning of the name Medjugorje) was transformed. New facilities were added to the local church of St. James; guest houses proliferated, along with souvenir shops. During my first visit to ex-Yugoslavia in 1990, I went to Dubrovnik-where the international airport served flights filled with passengers to and from Medjugorje-but knew nothing about them, aside from observing their fervor.

The location itself is remarkable, in that it sits at the western point of a triangle formed with two of the most important Islamic and Jewish spiritual sites in the Balkans, both of which have also drawn many wayfarers. Northeast of Medjugorje is the Sufi shrine of Blagaj. In its appearance, Blagaj could not be more different. While Medjugorje sits in a dusty basin, Blagaj stands at the source of a river, under steep limestone cliffs. Blagaj was built in the sixteenth century and survives as a rather modest complex, including a guesthouse and a tekija or Sufi meditation lodge. The river has been seeded with trout and a fish restaurant accommodates visitors-but in nothing like the numbers who go to Medjugorje.

Directly east of Medjugorje is the old Ottoman town of Stolac, outside of which one finds another hamlet, Krajsina, and the tomb of the “wonder-working rabbi,” Moshe Danon of Sarajevo, who died there in 1830 while on a pilgrimage to Jerusalem. Until the Holocaust, the grave of Rav Danon was visited by large groups of Bosnian Jews, who composed songs and devotional tracts about the virtue of making the journey.

On the road to Stolac sits Radimlja, a large aboveground necropolis of centuries-old stone sarcophagi, decorated with human and natural motifs, as well as crosses and other religious symbols. Although not considered a spiritual site, Radimlja is nonetheless a significant Bosnian cultural asset. The stone memorials are, more than any other feature in the landscape, the object of cultural rivalries, claimed by Croats, Muslim Bosnians, and Orthodox Christians.

I have visited all these places, some of them repeatedly. Blagaj is admirable for its simplicity. The grave of Rav Danon is saddening, because photographs and pamphlets demonstrate that it was once crowded with Jewish visitors, who were slain in the Holocaust. Radimlja is mysterious, rather than spiritual, but fascinating in revealing the premodern culture of the region. There are also reports of Serbian Orthodox shrines nearby, but since the Balkan wars of the 1990s they are not easily found.

I have also been to Medjugorje. In 1999 I copublished an article with a then-colleague, Laura Peterson, in a Californian Catholic monthly describing the hubbub at the town. But Peterson and I also heard the voices of discord. At Medjugorje, we listened to a Canadian woman who had been there twenty-five times. She told us, “It’s the peace. . . . There’s nothing like this in the West. If I didn’t have a family, I’d sell my home and move here. [The West] just doesn’t have the strength of faith they have here.”

Such a comment was counterintuitive, to say the least, given that the surrounding area had been devastated during the Croatian and Bosnian wars. Muslims and Serbs had been driven from the district; Serbs in Trebinje, a city further east, had expelled Muslims and Croats, destroying many old mosques; Ottoman monuments in Stolac were demolished by Croats, and the surviving Sarajevo Jews were afraid to visit the grave of Rav Danon. And that seemed to justify the question put forward by a Franciscan critic of the Medjugorje story, Fr. Ivo Sivric, who was born in the village. With exquisite understatement, he commented, “The lack of reconciliation and division in Herzegovina contraindicate the presence of the Queen of Peace and the apparitions.” Others asked why the messages from the Virgin were apocalyptic and punitive, filled with end-times rhetoric.

Some have even alleged that at Medjugorje, Mary had replaced Jesus at the center of worship. For most Bosnians, the most significant elements in the Medjugorje narrative are precedents from church and local history. The Franciscans in Bosnia have two provinces: one based in Hercegovina and the other, the Province of Srebrena Bosna, headquartered in Sarajevo. The Bosnian Franciscans had been granted special privileges to tend to the religious needs of Catholics, after the Muslim conquest of the land in 1463. This was a break from the Ottoman custom of recognizing the Orthodox churches as Christian representatives. But the Hercegovinians have a reputation as hard-headed nationalists, while the Franciscans in central Bosnia are considered by Muslims as well as Christians as dedicated to interreligious civility and local patriotism.

At Medjugorje, for almost thirty years, many have seen a demonstration of Hercegovinian militancy, and even of heresy. Once the local bishop rejected the visionaries, priests sent to the area by the regular ecclesiastical authorities were beaten up, prayer was held in local churches without the presence of clergy, and, some allege, the Medjugorje group was on the road to schism from the Roman church.

Serbs have loudly denounced Medjugorje as a Croatian conspiracy, while Bosnian Muslims have tended to remain subdued about it, at least in public. Local Muslims are mostly silent, especially after a war that took so many lives. But many admit they perceived in Medjugorje a Croatian ultranationalist production.

More could be said about the matter, but Benedict XVI appears to have made up his mind about Medjugorje. And many Croats, as well as Muslims and other Bosnians, are likely to quietly welcome his action.

Stephen Schwartz is a widely published journalist and author of The Two Faces of Islam.

This entry was posted in Uncategorized and tagged Medjugorje. Bookmark the permalink.

13 Responses to What Happened at Medjugorje?