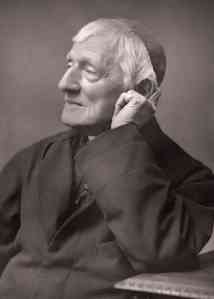 The 9th of October is the feast of Blessed John Henry Newman, the founder of the English Oratory. A new Latin hymn in his honour has been commissioned by the Birmingham Oratory and composed by Fr.John Hunwicke of the Walsingham Ordinariate. The hymn highlights some of the salient facts of  Blessed John Henry’s life; that he brought St.Philip’s Oratory to England; that he has helped many to find their way into the one true fold of the Redeemer; that he has shown us how Truth is unchanging in the development of doctrine; that he was made a Cardinal of the Holy Roman Church; that in heaven he intercedes for us. The full Latin text of the new hymn is given here, with a plain English translation for those whose Latin is not as good as Fr.Hunwicke’s. The metre of this new hymn enables it to be sung to the same melody as our beloved Cardinal’s own hymn in honour of St.Philip, “This is the Saint of gentleness and kindness.”

Hail, Founder, Father and Master! Hail John, who were the first to show the great Heart of blessed Philip to the English, and St. Philip’s mind.

Hail! God’s kindly light guided you from the shadows and error of darkness and made you the guide to truth for many of your countrymen.

Hail! Among teachers yourself more learned, you reveal that the teaching given to Christians is ever handed on whole and in the same sense.

Hail! To whom the guardian of the one sheepfold granted the blood-red hat, sign and pledge of Apostolic Faith and of martyrdom.

Hail, Founder! We pray that you be our intercessor with the eternal Trinity, to Whom may all the ages sound worthy praises throughout the world. Amen.

Author: Fr.John Hunwicke, The Ordinariate of Our Lady of Walsingham.

O God, who bestowed on the Priest Blessed John Henry Newman
the grace to follow your kindly light and find peace in your Church;
graciously grant that, through his intercession and example,
we may be led out of shadows and images
into the fullness of your truth.
Through our Lord Jesus Christ, your Son,
who lives and reigns with you in the unity of the Holy Spirit,
one God, for ever and ever. Amen.

1 Response to Hymn in honour of Blessed John Henry Newman