A perspective on Franciscan humility in the liturgy 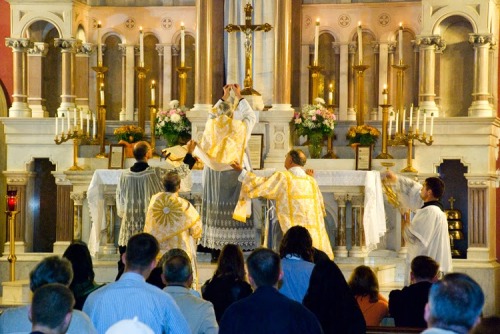 I am so fortunate to live in Hong Kong to be able to worship at a church where they have an unusually humble and inclusive form of liturgy at Mass.  There has been a lot of talk recently about humility and how important this for the Church – how priests in particular should be more humble.

The form of worship at the Mass I attend is not only in the spirit of Saint Francis of Assisi but is actually a form of worship that he would recognise when he served as a deacon so many hundreds of years ago.

When I attend Mass, the priest will genuflect upon approaching the altar indicating that it’s about Christ not himself.  Our priest will bow down low as he personally confesses his sins to God – specifically asking for prayers of the angels, saints and the people around him.

In this truly humble liturgy the priest shows his oneness with the People of God by facing the same direction as them – in doing so he doesn’t draw attention to himself but towards Christ, the crucifix and Eucharist.  He will bow his head at the name of Jesus and the Trinity and will genuflect in adoration every time he passes the tabernacle too.

In the creed he will use a term for ‘human beings’ rather than ‘man’ – which is a wonderful example of encompassing all.  The Mass I prefer to attend uses extremely inclusive language – in fact the congregation of Chinese, French, English, Spanish and Tagalog speakers all feel able to worship together with one voice and unlike the vast majority of other Masses I have been to – the diverse congregation joins in!

This focus on God rather than the person of the priest throughout the Mass continues in a number of gestures. A wonderful example is that during the Eucharistic Prayer he will fall to his knees in adoration the moment the words of consecration have been uttered – both before and after he has shown the Body of Christ and the chalice to the people. This humble and inclusive way of worshipping isn’t just available in Hong Kong – just google “Tridentine Mass” and you too might find one in your town or city.

The Latin Mass: A humble and inclusive form of worship

2 Responses to A perspective on Franciscan humility in the liturgy