Following our previous post of the Philippine Cathedral’s “rise from the ashes” after the disastrous passing of typhoon Haylan, we now produce a very different story of a Cathedral – this time in Argentina.

From “The Eponymous Flower”; (but I have taken the liberty of slightly altering the English translation, which contained various mistakes.)

Edit: the videos are horrific.  Our subtitle would read, “The Rage of Sodom”.

From the 23rd-25th November, in San Juan de Cuyo, Argentina, the feminist-leftist’s 28 Encuentro Nacional de Mujeres took place. Hordes of lesbians, their male peers and abortion advocates bellowed noisy and anti-Catholic slogans throughout the city. Over the past few years, these extremist gatherings have degenerated into violent attacks against Catholic institutions, and recently, the feminist hordes  have targeted Catholic churches. 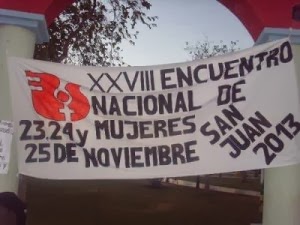 Because of the roughly 7000-strong antagonists (Church-hostile feminists) wanting to storm the Archdiocesan Church, 1500 young Catholics formed a human shield around the Cathedral of San Juan Bautista (St. John the Baptist) to prevent it from happening. Catholic institutions were daubed with slogans such as “Burn the Churches Down” or “Set Fire to the Churches.” Though hemmed in on all sides, the courageous Catholics opposed the angry mob by praying aloud, whilst they were insulted with slogans that cannot be repeated here.

According to reports from young Catholics who had defended the Church, the impression they had was that it was a “satanic attack” with “demonic figures”, being seen as part of an “anti-Christian world revolution.” In one place the extremists lit a big fire and burned an effigy of Pope Francis as they danced around the fire.

Pagina Catolica had called Catholics in advance to defend the Cathedral of San Juan, after an Internet initiative had called for the profanation of the Cathedral of Buenos Aires with a syncretistic Jewish-interfaith “memorial liturgy”. In a statement describing the feminist aggression Pagina Catolica wrote: “We are aware that even if the desecration of the church in San Juan could be prevented this time, we must not forget that the cathedral has not fared well recently, as when she was profaned after Archbishop Alfonso Delgado gave his approval, allowing the celebration of a memorial liturgy for Kristallnacht on 12th November.”

It is an incomprehensible desire of some Argentinian bishops to host syncretic “commemorative liturgies” in memory of Kristallnacht in 1938 in the German Reich. See separate reports: Young Catholics protest against “misuse” of the Cathedral of Buenos Aires for Jewish “commemorative liturgy” and the report of an alleged, but never confirmed by Rome, “condemnation” of young Catholics by Pope Francis, Pope Francis Condemned the Catholic Protest Against Syncretistic “Commemorative Liturgy” in Buenos Aires? A Riddle.