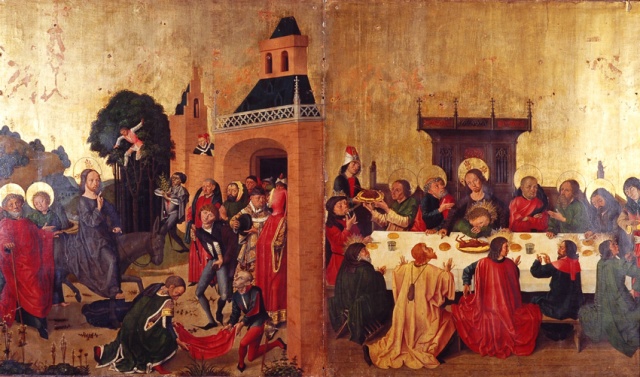 Caspar Isenmann – circa 1465. “Rejoice greatly, Daughter Zion! Shout, Daughter Jerusalem! See, your king comes to you, righteous and victorious, lowly and riding on a donkey, on a colt, the foal of a donkey.” (Zechariah 9:9)

The Children of the Hebrews spread their garments on the road, crying aloud and  saying, Hosanna to the Son of David! Blessed is He who comes in the Name of the Lord!

After the blessing of the palms at the beginning of Mass on Palm Sunday, the ministers of the altar and servers go in procession to the sanctuary, holding their palms aloft, to continue the first Mass of Holy Week, with that very long Gospel reading.

The hymn traditionally sung  during the procession is Gloria, laus et honor Tibi sit, Rex Christe, Redemptor (Glory, praise and honour to You, Christ King, Redeemer). We English-speakers know it as All Glory, laud and honour to you, Redeemer King, thanks to J.M. Neale’s translation.

The hymn is believed to have been both penned and composed by Bishop Theodulf of Orleans (born c. 750) , who was born in Spain and, like Alcuin of York, held forth on Church, learning and schooling affairs in the court of Charlemagne.

The hymn is replete with notions of Christ’s divine kingship as prophesied in Zechariah 9 and with fitting praise for Him as such.

The second reading of today, however, tells us that Christ “emptied himself” of this exalted status and took the form of a slave, coming in human likeness; and found human in appearance, He humbled Himself, becoming obedient to the point of death, even death on a cross. (Philippians 2)

St Andrew of Crete (born c. 650) also seemed to favour the emptying and humbling approach all those years ago when he wrote:

Let us run to accompany Him as He hastens toward His passion, and imitate those who met Him then, not by covering His path with garments, olive branches or palms, but by doing all we can to prostrate ourselves before Him by being humble and by trying to live as He would wish. Then we shall be able to receive the Word at His coming, and God, whom no limits can contain, will be within us.

I think the point is to try to see Christ’s divine royalty and His earthly humiliation as entailing each other.

The clip is from Pope Benedict’s last Holy Week as reigning pontiff. At times it’s a bit like “Great Birnam wood to high Dunsinane hill shall come”, but that was about another king of  a quite different character and purpose.