Our Lady’s Message At Recognised Apparition Sites Is Essentially The Same!

Yesterday, 13th July, was the 97th anniversary of Our Blessed Lady’s most important messages imparted at Fatima to the little seers. It included the terrible vision of Hell “where poor [unrepentant] sinners go”.

Shrine of Our Lady, Akita.

In 1998 it was revealed that Cardinal Ratzinger (later Pope Benedict XVI) made the astonishing remark to the Philippine ambassador to the Vatican that the messages of Fatima and Akita “are essentially the same.” It was not the first time that someone in a position to know provided such crucial hints. By examining certain aspects concerning the Fatima and Akita revelations, we will find abundant proof that the entire message of Fatima, especially the Third Secret, is of universal and apocalyptic proportions.

In 1984, just before retiring at a venerable age, the diocesan Bishop of Niigata, Bishop John Shojiro Ito, in consultation with the Holy See, wrote a pastoral letter in which he recognised as being authentically of the Mother of God, the extraordinary series of events that had taken place from 1973 to 1981 in a little lay convent within his diocese, at Akita, Japan. In June 1988, the then Cardinal Ratzinger approved the Akita events as “reliable and worthy of belief”. Hence in Akita we are dealing with a Church approved intervention of the Blessed Virgin Mary as sure in this respect as Lourdes, Fatima, or La Salette.

In 1973, in Akita, Japan, Our Lady spoke to a nun long afflicted by various illnesses and almost totally deaf, Sister Agnes Katsuko Sasagawa: “The demon will be especially implacable against souls consecrated to God.”

The first message received by Sister Agnes Katsuko Sasagawa on 6th June, 1973, was a call for prayer and sacrifice for the glory of the Father and salvation of souls. The second message, 3rd August, 1973, was for prayer, penance and courageous sacrifices to soften the Father’s anger. 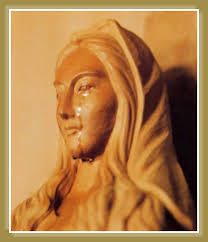 Weeping statue of Our Lady at Akita

The third message on 13th October, 1973, the actual anniversary of the final visions and miracle of Fatima is as follows: “As I told you, if men do not repent and better themselves, the Father will inflict a terrible punishment on all humanity. It will be a punishment greater than the deluge, such as one will never have seen before. Fire will fall from the sky and will wipe out a great part of humanity, the good as well as the bad, sparing neither priests nor faithful. The survivors will find themselves so desolate that they will envy the dead. The only arms which will remain for you will be the Rosary and the Sign left by my Son. Each day, recite the prayers of the Rosary. With the Rosary, pray for the Pope, the bishops and the priests. The work of the devil will infiltrate even into the Church in such a way that one will see cardinals opposing cardinals, and bishops against other bishops. The priests who venerate me will be scorned and opposed by their Confreres. The Church and altars will be vandalised. The Church will be full of those who accept compromises and the demon will press many priests and consecrated souls to leave the service of the Lord. The demon will rage especially against souls consecrated to God…”

In his pastoral letter approving the events of Akita as supernatural, the Bishop of Niigata said: “After the inquiries conducted up to the present day, one cannot deny the supernatural character of a series of unexplainable events relative to the statue of the Virgin honoured at Akita (Diocese of Niigata). Consequently I authorise that all of the diocese entrusted to me venerate the Holy Mother of Akita.”

Concerning the messages, His Excellency said: “As for the content of the messages received, it is no way contrary to Catholic doctrine or to good morals. When one thinks of the actual state of the world, the warning seems to correspond to it in many points.” His Excellency explained that he had taken eight years to give this judgment because of the importance and the responsibility in question. “The Congregation of the Doctrine for the Faith has given me directives in this sense,” the Bishop said, “that only the bishop of the diocese in question has the power to recognise an event of this kind.”

The events of Akita have been confirmed by definite miracles, two of which are cited by the Bishop in his pastoral letter. While the warning given by Our Lady at Akita is terrible, the message, as the Bishop points out, is basically a repetition of the Message of Fatima. Our Lady stressed the importance of praying the Rosary, and above all of accepting from God whatever He may send in the course of each day . . . whatever suffering . . . and to offer it up in reparation for so many sins committed throughout the world at this time. Our Lady begged especially for prayers for bishops, priests, and religious, and for reparation before the Blessed Sacrament. Our Lady said: “I have prevented the coming of calamities by offering to the Father, together with all the victim souls who console Him, the sufferings endured by the Son on the Cross, by His blood and by His very loving Soul. Prayer, penance, and courageous sacrifices can appease the anger of the Father.”

To the little Japanese religious community of Akita Our Lady asked that it “live in poverty, sanctify itself and pray in reparation for the ingratitude and the outrages of so many men.”

At Fatima the Angel of Portugal had urged the three little seers to pray and adore the Most Holy Trinity, Father, Son and Holy Spirit, “in reparation for the outrages, sacrileges and indifference by which He is offended.”

Sr. Lucia had spoken of the Blessed Virgin’s anguish and sadness at Fatima, “caused by the offenses of God and the punishments which menace sinners”, as the reason behind the great sacrifices of her cousins Francisco and Jacinta, because in all the apparitions of the Most Holy Virgin, they always saw her very sad. “This sadness, this anguish which we noted in her, penetrated our souls. This sadness is caused by the offenses against God and the punishments which menace sinners…” The other thing which sanctified these children was to see the vision of Hell.

To Father Augustin Fuentes, postulator of the causes for beatification of Francisco and Jacinta, Sr. Lucia said: “Father, that is why my mission is not to indicate to the world the material punishments which are certain to come if the world does not pray and do penance beforehand. No, my mission is to indicate to everyone the imminent danger we are in of losing our souls for all eternity if we remain obstinate in sin.”

On two different occasions, Sr. Lucia of Fatima had intimated the Third Secret’s connection to Divine Revelation when she stated it was in the Gospel and the Apocalypse (and she specified chapters 7-12) – “Read them!”

The third part of the Message of Our Lady Lucia concluded: “will be very sad for everyone, not one person will rejoice at all if beforehand the world does not pray and do penance.” She would also write many times to reliable witnesses of a ‘diabolical disorientation’ in the Church and the world of which Our Lady warned her.

Could the prophesies of Fatima and Akita concerning the turmoil in the Church be playing out in our present times? 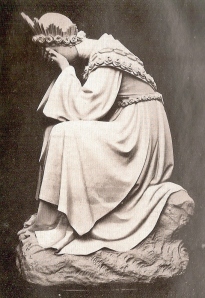 Our Lady’s Tears at La Salette

It is interesting to note how the prophecies of the weeping Madonna at La Salette in south-eastern France in 1846 to the two children, Melanie and Maximin, are not unlike those at Fatima and Akita. Although the secrets imparted to the children have never been fully revealed, we know they contained a warning of terrible consequences that would befall mankind, devastating wars and famines, if they continued to turn from God. (As Our Lady would later reveal at Fatima, “War is a punishment for sin”.) She urged the children to pray and be obedient to their Faith, summing up the great evil of our times – human pride. Her message was for all times and all places, but particularly was it meant to show how false was the idea that man no longer needs God. Melanie and Maximin never achieved the practice of “heroic virtue” like the children of Fatima did, but they remained constant in the Faith and never denied the Vision of Our Lady of La Salette. After a thorough investigation, the Bishop of the diocese was satisfied that the appearance was authentically supernatural; Pope Pius IX would approve devotion to Our Lady of La Salette and his successor, Pope Leo XIII, built a great basilica on the mountain.

Although the apparitions of Garabandal in the 1960’s have never been officially recognised by the Church as being of supernatural origin, it is interesting to also note how very similar the apparent messages Our Lady gave the four young seers are to those at Fatima and Akita. They speak of the necessity of prayer and penance too, with a grave warning of the coming crisis within the Catholic Church and the betrayal of so many of her ordained clergy! A future great chastisement and a miracle were also promised at Garabandal. These will be announced beforehand by Conchita, one of the seers, and are yet to take place.

Many will be asking, “why is Our Lady appearing at so many places to impart the same teachings and warnings?” The obvious answer must be because She is truly our Heavenly Mother, and She loves us with a patient, suffering Mother’s love. Her Immaculate Heart, so intimately united with the Sacred Heart of Jesus, weeps to see the wrong path so many of her children are taking. She wants to guide us back to her Divine Son Who shed His Precious Blood for our Salvation. “Oh children, listen to me!” (Our Lady’s words at Garabandal.)

107 Responses to Our Lady’s Message At Recognised Apparition Sites Is Essentially The Same!