First Century A.D.: no ‘written’ Bible but the Holy Eucharist

Something for the “Bible Alone” crowd to chew over. 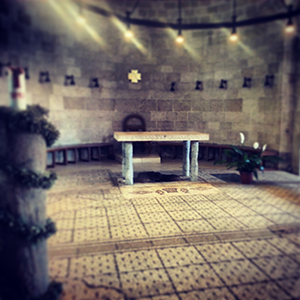 [Altar from the Church of the Multiplication, built along the shores
of Galilee over the stone that Jesus used to perform the miracle of the loaves & fish.]

If you walked into a first-century church and asked to see a copy of the New Testament, you’d get a bunch of confused looks and faces.

The Bible didn’t yet exist!

For the early Christians, “New Testament” was not a book, but a sacramental phrase.

“The New Testament” was the Holy Eucharist itself.

In his new book “Consuming The Word: The New Testament and the Eucharist in the Early Church”, Dr. Scott Hahn explains the details of his Biblical research that unites the documents of the New Testament and the Sacrament of the Eucharist. The words “covenant”, “testament”, “liturgy”, and “Eucharist” are all interconnected in profound ways that we do not realise on the surface. When these terms are used without understanding them, we are separated from the mystery experienced in the words of our Faith. So to understand Christianity’s most basic terms, we must see them as the early Christians did.

For them, the phrase “New Testament” was at once sacramental and liturgical. It affirmed that the Bible’s proper home was in “the heart of the Church.”

“God reveals Himself and gives Himself in the scroll.” – Scott Hahn

“One of the Word of God, the other of the Eucharist. The work that we take on ourselves consists in approaching these two tables in order to be filled.”

82 Responses to First Century A.D.: no ‘written’ Bible but the Holy Eucharist