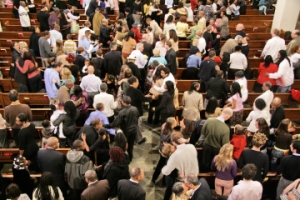 In a comment at the Catholic Herald online, Father Aidan Nichols reminds us that that the liturgy does not belong to us but the Church and that we must guard and defend the Church’s precious liturgical heritage at all costs:

After looking into the question for some eight years, the Vatican’s Congregation for Divine Worship and the Sacraments has come up with a clarification about the Sign of Peace at Mass, which says that there should be no changes, but abuses should be avoided. You can read all about it here.

This is something of a massive non-story, as it tells us nothing new. Things, I suppose, in most Churches, will carry on exactly as before. They could, conceivably, have chosen to move the sign of peace to the position it occupies in many Catholic oriental liturgies, but decided not to. They re-iterate what everyone should already know, namely that he sign of peace is not meant to be an occasion for secular glad-handing; it should not be an occasion where the priests leaves the altar in order to “work the crowd”; it isn’t a crowd, it is a congregation; it is not a secular gathering, it is the Mass.

At bottom what lies behind this question is the major matter of maintaining clear blue water between liturgy, the action of Christ in head and members, and other human activities. The Congregation is rightly concerned to maintain the dignity of liturgy, and to avoid all those activities which undercut its true meaning. (Leaving the altar to greet people at the peace absolutely undercuts, indeed contradicts, the meaning of the Sign of Peace, as it entails leaving the altar and ignoring Christ Himself who is on that altar, and who must be the only focus of the celebration.) Moreover, once more, the Congregation is calling all of us – and the clergy must take the lead here – to guard against the loss of reverence, and the loss of transcendence in our liturgical celebrations.

Whenever I mention these matters to people I sometimes notice their eyes glaze over. They simply do not ‘get’ why liturgy matters. Surely there are more important things, they ask? Actually, no. There are no more important things. Liturgy is central. It is the reason why the Church exists: to carry out the command of the Lord, in the way He wants it to be carried out, as He commanded us to do at the Last Supper. We must guard and defend the Church’s precious liturgical heritage at all costs. The chief threats to it are secularisation – that is not a dig at the National Secular Society, but rather at those Catholics who wish to make the Mass more or less indistinguishable form any other human activity, by chipping away at its sacral character. The other threat is theological and historical ignorance, and those who want to leave out elements of liturgy on the grounds of being ‘up to date’, unaware (at least one supposes they are unaware) that liturgy is a language, and the omission of certain elements may make the elements that remain incoherent. The final and perhaps most insidious threat comes from those who wish perhaps to change the theology of the Church and make it into a different sort of church altogether. If one changes the Mass sufficiently, one changes the belief that sustains it, and which it in turn sustains.

The price of theological coherence is eternal vigilance. This decree from the Congregation is in a sense a non-story, but, goodness, in another sense, it is very important. It represents a ‘no broken windows’ approach. I suppose that the priest leaving the altar to greet Mrs Jones in the front row is hardly a big thing, but from such tiny things big things grow. A priest not bothering to wear a chasuble is hardly a Lutheran, but he has made a small step in that direction. And so on.

But at the same time, let a warning note be sounded. The Congregation for Divine Worship speaks, we listen. Let us never make the mistake of some who think they own the liturgy. We do not. The Church does. Neither should private judgement sway us and a fetishisation of the liturgy take hold of us. Ubi Petrus, ibi ecclesia.

10 Responses to Liturgical Heritage and the Sign of Peace