7 Things To Restore the Sense of the Sacred 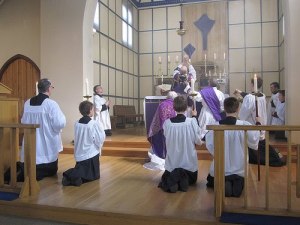 Pat Archbold from the Creative Minority Report presents priests with the challenge to implement seven liturgical changes which, coupled with a sound education of the faithful, would restore the sense of the sacred and yield many blessings:

When it comes to the liturgy of the Roman rite, some would have you believe that you have two choices, the progressive Novus Ordo mass at St. Banal of Boringham parish or the Traditional Latin Mass at the Parish of Quo Primum on the corner of Lunatic and Fringe.

They would also have you believe that never the twain shall meet, that until the Pope of Future Past arrives to reform the Novus Ordo, that any chance of recovering what was traditionally considered sacred and reverential in the Novus Ordo is impossible, regardless of whether you consider that a feature or a bug.

But this is simply not true. There are many things that Pastors and Priests could do tomorrow to help restore a sense of the sacred and proper reverence to the liturgy, things that are perfectly in line with Vatican II. Further, this is no theoretical exercise, there are pastors all around that have done some or even all of these things.

I can think of no one single thing that could do more to properly orient the minds and hearts of the faithful (not to mention the priest) than restoring ad orientem worship. I commend to you the letter that Fr. Richard Heilman wrote to a priest about the fruits of this change one year after its implementation. No permission or indult is required to make this change as it is just as the mass was originally intended. All that is needed is a willing priest and time to properly educate the faithful.

Restore chant and polyphony. Ditch the lame hymnal and its happy-clappy anthropocentrism and bring back chant and polyphony. Again, this is exactly for what Vatican II called, “The Church acknowledges Gregorian chant as specially suited to the Roman liturgy: therefore, other things being equal, it should be given pride of place in liturgical services. But other kinds of sacred music, especially polyphony, are by no means excluded from liturgical celebrations, so long as they accord with the spirit of the liturgical action, as laid down in Art. 30.” Moreover, the priest should chant the mass with the faithful providing chanted responses. A priest could even chant the propers. All this can take time and a concerted effort at education, the payoff could be immense.

Latin, yes Latin!! Again, Vatican II’s Sacrosanctum Concilium “Particular law remaining in force, the use of the Latin language is to be preserved in the Latin rites.” What Vatican II envisioned was the use of the vernacular for the variable parts of the mass, “This will apply in the first place to the readings and directives, and to some of the prayers and chants.” But the parts of the mass that are the same every week could be in Latin, the people could be educated on this, education, translation cheat sheets, and time could restore that which was always to be preserved. At the very least, prayers like the Sanctus and the Agnus Dei should be in Latin and the Kyrie in Greek as many people are already familiar with them.

Proper Reception of Communion, Kneeling and On The Tongue. In his article at New Liturgical Movement, Fr. Richard Heilman does all the heavy lifting on this topic.

Pope Benedict XVI, has noted that kneeling is “an expression of Christian culture, which transforms the existing culture through a new and deeper knowledge and experience of God.” He reminds us that “the word proskynein alone occurs fifty-nine times in the New Testament, twenty-four of which are in the Apocalypse, the book of the heavenly liturgy, which is presented to the Church as the standard for her own liturgy.”

In his book The Spirit of the Liturgy, Pope Benedict speaks of a “story that comes from the sayings of the Desert Fathers, according to which the devil was compelled by God to show himself to a certain Abba Apollo. He looked black and ugly, with frightening thin limbs, but, most strikingly, he had no knees. The inability to kneel is seen as the very essence of the diabolical.”

Why Receive on the tongue?

Kneeling and receiving the Eucharist on the tongue encourages you to really think about what it is you are doing while at the same time showing proper respect for the Eucharist.  Adding or using a communion rail is the best way to encourage proper reception.

Speaking of respect for the Eucharist

The ordinary ministers are Bishops, Priests, and Deacons.  When every Tom, Dick, and Jane runs up to the sanctuary and hands out communion, the sacredness of the Eucharist is diminished.

Appropriate Attire.  This is all about education, education, and more education.  Priests and pastors should repeatedly preach and educate the faithful about proper attire for mass.  Nobody would dress in flip flops and tank top to a job interview,  or to meet the President or the Pope, but meeting our Lord and Savior in the Eucharist?  Other things Priest can do is ditch the altar server’s potato sack robes and replace them with cassocks and surplices.  Priest’s could teach about the sacredness of women and encourage use of the veil.  Everybody knows that what we wear changes how we behave and how we behave changes how we think.

General Reverence and Sacredness.  This is all about eliminating disruption and restoring a sense of the sacred.  Some things to consider here are:

I don’t pretend that any of these things are easy for the priests or the faithful, but they are all doable and many priests and pastors have implemented many or all of these things. Some of these things may be particularly difficult for some older parishioners, boomers and beyond, no doubt. But to avoid restoring the sacred for the sake of these is simply to make the dying patient comfortable rather than trying to cure the disease.

In all these things, the priest must be committed to education and some may take time.  Parishes that have implemented many of these changes have seen tremendous blessings.