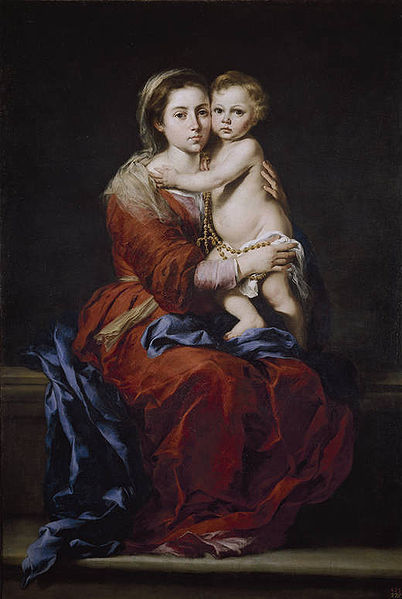 Today is the last day of October, the month of the Holy Rosary, and marked out especially in this year 2014 for being the 800th anniversary of the heavenly gift of the Holy Rosary to St. Dominic, and through him to the whole Church.

Why does the Blessed Mother insist so much on the daily recitation of this prayer? There is admirable divine wisdom in it. It is truly a hidden treasure. Let us first recall the exact words of Our Lady in answering St. Dominic’s prayer (words found in the 2nd Rose of St. Louis de Montfort’s Secret of the Rosary), and then make some applications.

The year was 1214; St. Dominic had already founded the Order of Preachers, later called the Dominicans, and he was immediately faced with the Albigensian heresy which was spreading especially through the south of France where St. Dominic was. Our Lady appeared to him after he had been praying seriously and doing severe penance for many days in order to know how to fight the heretics. She said to him:

Dear Dominic, do you know what weapon the Most Holy Trinity wants to use to reform the world?

O my Lady, you know it much better than I do, because, next to your Son, Jesus Christ, you have always been the instrument of our salvation.

I want you to know that in this kind of warfare the ‘battering ram’ has always been the Angelic Psalter which is the corner stone of the New Testament. So, if you want to reach these hardened souls and win them to God, preach my Psalter!

Our Lady gave a means “to reform the world”. Indeed, the heretics at the time of St. Dominic were not only denying the divinity of Our Lord Jesus Christ, but were attacking the family and the civil institutions of the state, thus undermining the spiritual and temporal orders of Christendom—this was in 1214 A.D. in France. This expression, “reform the world,” is not different from that of St. Paul “to restore all things in Christ”.

It is not, therefore, surprising to find that popes and kings have requested crusades of rosaries against all kinds of plagues threatening both Church and State—threatening ultimately the salvation of innumerable souls.

St. Dominic did indeed listen to his Queen, and thousands of heretics were converted.

The first Dominican Pope, St. Pius V, used the Rosary in the crusade against the Muslim Turks who were dangerously threatening to invade Europe. And the Rosary won again. It was October 7, 1571. Less than one hundred years later, Louis XIII of France, also heeded Our Lady in a war against the Protestants, and, in thanksgiving for the victory, he built the famous church of Our Lady of Victories, in Paris. The feast of Our Lady of Victories is on October 7th! And the list of the victories of the Rosary is long and continues until our own days. There have been a number of national victories against the ills of communism in the last 100 years (Hungary, Brazil, Austria, Philippines and others) thanks to the Holy Rosary. However, communism as a whole has not yet been defeated.

Whether it is against the Albigensians, the Protestants, the Muslims or the Communists, “in this kind of warfare, our ‘battering ram’”, the Rosary, must always be used.

The Holy Rosary is an eminently Catholic prayer. In it we find our Creed, and all the great mysteries from the Incarnation until “life everlasting.” We proclaim by it the unique prerogatives of the Immaculate Virgin, always “strong as an army in battle array”: her divine Motherhood, her Immaculate Conception, her Co-Redemption, her role as Mediatrix of all graces, her glory in Heaven.

The Rosary has been used to save the family, attacked from all sides, whether by divorce, abortion, contraception, sex education, or by what is now called “the theory of gender”. This latest insanity is presently raging in the entire western world and is aggressively promoted in the schools. This crazy theory states that we are not born men or women, we become men or women by our choice or by our environment and education!

“[We must] reach these hardened souls and win them to God,” said Our Lady. The Rosary is not just a prayer like other devotions; it is concerned with bringing souls into the fold of the only true Church to “win them to God” means to convert them to the true Church, which is exactly what the Rosary has done throughout all its history.

As we leave the month dedicated to the Holy Rosary behind us, let us make a firm resolution to continue to pray our daily Rosary, and thus rain down graces and blessings upon all members of our Holy Catholic Church, and the whole burdened and suffering world.